NASCAR's Most Popular Driver in Danger of Becoming Irrelevant

Celebrating as Father and Son

Bad luck on the racetrack has been every driver's companion at one point or another. Dale Earnhardt Jr, NASCAR's 10-time running most popular driver, knows that all too well. He watched luck work against his father time and again at the Daytona 500. Dale Senior's luck eventually turned but Junior has to be left wondering when his might finally do likewise. His popularity skyrocketed in no small part due to his on-track performance. But with Sunday's crash (due to a tire failure), Earnhardt's hopes to make the Chase for the Sprint Cup championship took yet another hit. While that damage was bad enough, Earnhardt's confidence took yet another hit and for him, that may prove more critical and more difficult to repair.

Earnhardt Junior's popularity came in part because of his father but it also came in part because of his own success. He won a pair of championships at the Nationwide level, then known as the Busch series. Driving for his father's team, he moved to the Sprint cup full time in 2000 and immediately found success. The picture of him in the Texas victory lane with his father is one of the more poignant ones in all of motorsports- all the more so with Senior's tragic passing the following February. Junior, despite having every emotional reason to pack it in, responded with three wins that year and an eight place finish in the final standings. 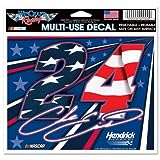 Over the course of the next three years, Junior established himself as one of the better young drivers in all of NASCAR. Between 2002 and 2004, he won ten races, scored 40 top five finishes, and finished in championship contention the last two years. In fact, with a break or two in the other direction, he may well have been NASCAR's first Chase champion (a title held instead by Kurt Busch, who had a lucky break of his own in the final race). As he turned 30, Earnhardt seemed to have a limitless future and the question was how many titles would he win.

It didn't happen, of course. He's won only four races in those 8+ years. He's missed the Chase on five separate occasions and in the years he's made it, Earnhardt was not a factor. Observers note that he still has plenty of time left as an active driver and he's behind the wheel of some of the best equipment in the sport. His fans point to the renaissance his career has been on since the pairing with crew chief Steve Letarte at the beginning of 2011. His recent contract extension with Hendrick means he'll have plenty of opportunities in the years to come, even if 2013 doesn't turn out to be the year. While those facts are true, Earnhardt is approaching a very dangerous point in his career. He's not in danger of losing his ride. He's in danger of becoming irrelevant.

Earnhardt senior once famously said, “It doesn't matter if they're cheering or booing. Just as long as they're making noise.” For years, Junior Nation did just that. They showed up in their red Budweiser gear and stood tall every time the #8 pulled to the head of the field. When he moved to Hendrick Motorsports in 2008, they traded in their red for green and added an 8 to their signs and banners. But the expected success never came and those cheers audibly faded with every 25th place finish. It's no coincidence that the decline in popularity for stock car racing occurred at the same time.

NASCAR officials must laugh privately whenever an accusation of race-fixing is made. The fact that Junior has yet to win a championship is proof that NASCAR isn't professional wrestling. When he's in contention to win the race, ratings climb. There's a buzz at the racetrack when he's in the championship conversation. He nearly always says the right things in media interviews and represents the sport well. He's one of the few racers that casual fans know by name. If the sanctioning body were to stack the deck in anyone's favor, it would be Earnhardt.

Sunday's crash was just another stroke of bad luck in a year that already had no shortage of it. In the June Michigan race, Earnhardt blew an engine and finished 37th. That came just a few weeks after another blown engine (and a 39th place finish) at Charlotte. Last week it was a late-race crash with teammate Kasey Kahne and a 30th place finish. Battery issues torpedoed his run at Texas, where Junior scored his first Cup win. It's one thing for a team to struggle finding speed; 2009 and 2010 essentially saw his team unload slow and tap the brakes all weekend long. But the National Guard #88 isn't short of speed. They've been a factor in numerous races this season only to have the horseshoe land on them at the worst possible time.

A Partnership That Works

Getting Into the Car at Michigan

Yet it doesn't matter if it's luck, speed, or skill at this point. Dale Earnhardt Jr. is a 38 year old man. After 15 years at NASCAR's highest level, he has maximized his skill set and isn't going to become a different driver. He's shown the ability to win races and compete for championships. For both NASCAR and his own sake, he needs to show that ability once again. And he needs to do it soon.

Today's NASCAR is a very different sport than it was in Dale Senior's heyday. Teams and sponsors do not have the same degree of patience they once had to let a driver/team find themselves and grow over time. A perfect example is the recent news of Juan Pablo Montoya's impending departure from Earnhardt Ganassi Racing. Reaction in the racing community was not shock that Ganassi wanted to try a new hand behind the wheel. Instead, most seemed surprised it took this long. Montoya had a few wins, led a few laps, and represented his sponsors both on and off the track. But the results were not good enough to justify re-signing JPM, particularly with developmental driver Kyle Larson showing such promise.

A Fast Start With Hendrick

Hendrick Lineup Is Strong; Who Goes?

Earnhardt would do well to mind that example closely. Like EGR, Hendrick has a developmental driver waiting in the wings in Chase Elliott. While Elliott is not yet ready for Cup level competition, what happens when he is? He'll likely be in Nationwide by 2015 if not sooner, and if he wins races Hendrick will have to find somewhere to put him. Jeff Gordon's #24 is the likely destination- but it's not the only one. Rick Hendrick values Dale Earnhardt Jr. as a person and as a friend and Earnhardt has often said the reason he came to the team was as much for Rick as it was for the equipment.

But Hendrick is also a businessman and a race team owner. The businessman in Hendrick appreciates what Earnhardt brings to the race team from a PR and a sponsorship perspective. Until this year, getting sponsors for the #88 was more a matter of determining who to partner with instead of actively hunting for someone interested. With 12 unsponsored races in 2013 for the car, that's clearly no longer the case. The team says they're looking for the right partner but that's the same thing we heard during the winter media tour. At some point you sign a deal and put the company's logo on the car. The fact that this hasn't happened indicates that maybe there isn't the kind of interest in Dale that there once was.

That lack of interest, be it from sponsors or from the fans, is Dale Earnhart Jr's greatest danger. His popularity meant that he had time to work with. He had time to become accustomed to the team, to find the right match in personnel and equipment. He had time to achieve the results that both he and Hendrick expected when he came aboard. Most of all, he had time to make himself as relevant on the racetrack as he already was with the fans. The time is rapidly slipping away. Junior Nation isn't as large as it once was and the results, while improved, are not there yet. If luck is all that's holding him back now, Dale had better start digging for Jimmie Johnson's famed horseshoe or his relevance to NASCAR could disappear entirely.

Would Dale Earnhardt Jr. be less relevant to NASCAR if he misses the Chase this year?