NASCAR's own history of bullies vs. champions

The biggest sports story of the week took place not on a race track but in the Miami Dolphins media room. Second year offensive lineman Jonathan Martin accused a teammate of abusing him and threatening both he and his family while another man's career is likely over. Emotions run high on both sides of the argument and its one that NASCAR fans have been having for years. Does walking away from a bully equate to mental weakness? Do champions turn the other cheek or do they pick up a rock and fight back?

For those who may not have heard (or have been under a rock for the past week), what happened in Miami is as follows. Martin, a bi-racial graduate of Stanford, left the team in a cloud of mystery at the end of last week. Initial reports indicated that his departure was due to a mental health issue of some sort involving his teammates. As the week wore on, Miami suspended veteran offensive guard Richie Incognito for conduct detrimental to the team. Multiple media outlets reported that Incognito, in an attempt to toughen up a player perceived as soft, had sent Martin threatening messages. Those messages included both the use of the N word and ended with the phrase, “I'll kill you.” Teammates by and large supported Incognito while their comments to Martin were generally restricted to saying they wish he'd respected the chain of command and handled the situation himself.

And for the record, Colonel Nathan R. Jessup would be proud. Unit, Corps, God, Country, right?

Those criticizing Martin say that the 6'5” 300+ pound man should not have needed to create a media firestorm to solve his problem. If someone wrongs you, settle it yourself. Don't look to someone else to fix your problems; pop the bully in the mouth and he goes away. His failure to fight back was just another sign of the mental toughness the second year pro lacked.

The arguments should sound familiar to at least one NASCAR driver. Despite winning two races and leading plenty of laps, Kasey Kahne found himself needing a wild card berth at Richmond to qualify for NASCAR's Chase. In large part, the reason why was due to a number of run-ins with Joe Gibbs Racing drivers that ended Kahne's day. Then Kahne found himself staring at the rear bumper of Matt Kenseth as the laps wound down at Bristol and Kahne faced a decision. Should he race Kenseth hard but clean and let the chips fall where they may? Or should he give the JGR crew a taste of their own medicine and send the #20 into the wall so he could win the race. Kahne ultimately chose the first option and finished in second place.

The response? Many observers crushed Kahne for not “standing up” for himself. Article after article bashed the driver, saying that he would never win a Sprint Cup championship because he was “too nice” and allowed himself to be bullied on the track. They noted that despite his immense talent as a driver that Kahne simply didn't have the mental or emotional toughness to do what was necessary to make it- particularly in NASCAR's “Boys, have at it” era. This despite the fact that Kahne has won 16 races, is entering the prime of his career, and for the first time is in top shelf equipment. No, the fact that he didn't wreck Kenseth signaled some sort of weakness on his part.

He isn't the first driver to hear those whispers. Mark Martin, perhaps one of the greatest racers to ever strap in a race car, has heard them throughout his career. Five times Martin has finished second in series points. He's won 40 Sprint Cup races (and 96 NASCAR events overall), five IROC series championships and is respected by every single person in the garage. Yet he too has been accused of being “soft” over the years- and that his softness is why Martin has never won a Sprint Cup title. Jeff Burton has had his toughness questioned at times, yet that hasn't stopped others from respecting him to the point where he's earned his nickname as “The Mayor” in the garage. But he too hasn't taken home NASCAR's biggest trophy.

So is that really it? Both for the drivers listed above and for Jonathan Martin in the NFL, is it really just a matter of them needing to “man up” and fight back?

The problem in either case is that fans of both sports have an idealized image of what their heroes are supposed to be. The culture of John Wayne is strong on the race track and in NFL locker rooms alike. The competitors are described as “warriors” who take the track or field to “do battle”. We accord enormous levels of respect to those who demonstrate physical toughness; to this day, Jack Youngblood is revered by football fans for playing a Super Bowl on a broken leg. NASCAR fans do likewise for Dale Earnhardt Sr and the numerous injuries he raced in spite of over the years. 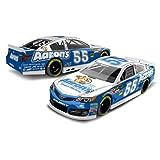 Meanwhile, those who fail to show the same level of toughness- be it mental or physical- are ridiculed. Plenty of fans questioned Dale Earnhardt Jr. when he got out of the car last fall due to a concussion. Other drivers indicated that they would have likely made another decision or hid concussion symptoms, particularly if a championship was on the line. This despite the fact that by its very nature the symptoms of a concussion are a danger not only to Earnhardt but to any driver who shares a track with him. The culture of “man up” stays strong.

Yet not every driver who mans up becomes a champion. Juan Pablo Montoya has struggled the past few years- in large part because he spends too much time settling scores and righting perceived wrongs. He refuses to give an inch to anyone on the track and while that may be entertaining to watch, it hasn't done Montoya any favors in finishing races or improving his oval skill. Kyle Busch, for all the laps he has led and races he has won, is no closer today to winning a title than he was nearly a decade ago when he drove for Hendrick. His willingness to use (or abuse) the chrome horn is well-known and he is the last person worth bullying on the track. That willingness to stand up for himself at all times has costs and he seems perfectly willing to continue paying them.

On the other hand, not every driver that avoids the cycle of payback comes up short either. Look no further than the current points leader (and five time former champion) for confirmation of that fact. When's the last time Jimmie Johnson worried about paying someone back? He's been put in the wall on more than one occasion yet Johnson hasn't gotten caught up in needing to prove his manhood by wrecking them back. Neither has his chief rival this season, Matt Kenseth. Instead, both are proof of the dictum that the best revenge is living well.

Please don't misunderstand me. Like virtually every other long-time NASCAR fan, I enjoy competition on the track. That competition often sparks tempers for athletes that have a 3300 pound stock car at their disposal to show that displeasure. A little beating and banging adds excitement to an average race and can make a good race into something historic. A last lap crash while going for the win is a memorable ending that leaves fans talking for days and weeks to come.

But that doesn't mean a driver needs to be a bully to be a champion. Nor does it mean that a driver who doesn't engage in payback is somehow weak. It simply means that they choose a different way to show their strength. Anyone can get inside the competition and then turn right. Sometimes the greater strength is leaving them- and the anger they caused- in the rear view mirror.

Does paying someone back on the track equal mental toughness?