One of the more unique race tracks on the NASCAR circuit is the Pocono Raceway. This track, located in Long Pond, PA, is known for its unique triangular layout. Few tracks are as quirky as Pocono, and many drivers find it a difficult day of driving.

The track is located in an area that is close to many major East Coast urban centers like New York, Philadelphia, Boston and Washington, DC.

The track had serious financial troubles during its early years, and nearly went bankrupt. The tracks owners decided to plod along, however, after a show of support from Bill France, Sr. The founder of NASCAR moved his series to the track in short order, and the series soon started coming to the track twice per year. 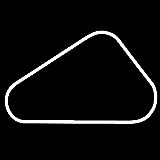 The Layout of Pocono Raceway

Pocono Raceway is one of the more interesting tracks on the Sprint Cup circuit. Drivers have three very distinct turns on the track, which is shaped like a triangle.

Turn 1 is a relatively wide-sweeping turn that has banking that reaches 14°. Turn 2 is called the Tunnel Turn because of an access tunnel that runs underneath of it. This turn is one of the more difficult portions of the track, and it is banked at 8°. Turn 3 follows what is called the short chute, and it is a rather long and flat turn that runs onto the front straightaway. This turn has the least banking of any turn in NASCAR at only 6°.

The front straight is one of the longest in racing at 5/8-mile. The unique configuration of the track is a challenge for crew chiefs. In recent years, some drivers have made use of their gear shift to take advantage of the long front straightaway.

Pocono Raceway can accommodate over 76,000 fans for its race weekends, and the infield area has quite a bit of room for those who like camp at the track.

There have been two races at Pocono Raceway each year since the 1970s. The first is held in June and the second is held just a few weeks later in August. Both of the Sprint Cup races are now 400-mile events, known as the Pocono 400 and the Pennsylvania 400. The track has also hosted Indy cars, and this agreement resumed in 2013. The last time a major open-wheel series had raced at the track was back in 1989.

A Virtual Lap around Pocono Raceway

The fastest qualifying lap in Pocono history averaged just under 180 miles per hour. Joey Logano turned this lap in 2012. Indy cars can obviously go faster, and Marco Andretti turned a lap at over 221 mph in 2013.

Richard Petty won the first 500-mile NASCAR race at Pocono. Jeff Gordon has won a record six races at the track overall. Mark Martin has both the most top-5 and top-10 finishes in the track's history.

Jeff Gordon won the fastest race every in Pocono history. In 2011, Gordon finished a 500-mile race at an average speed of just over 145 mph.

Ken Schrader has the NASCAR record for poles at the track with five.