Roush Fenway and Ford pull a Lazarus act at Bristol

“The reports of my death are greatly exaggerated.”

One has to think that the above quote must have been on the lips of Jack Roush at the end of Sunday's Food City 500 in Bristol. Coming off a three race start to 2014 that saw all three of its entries struggle to find speed, there were plenty of questions facing Roush Fenway Racing. Had the team slipped behind the other elite teams in the garage? Should Ford focus more on the efforts of Penske Racing given their better performance to date? Carl Edwards win silenced the critics and showed that RFR hasn't quite moved on just yet.

While early, there was every reason to question where RFR was as a team. Despite putting two teams in the Chase last season, neither was a factor in the championship race. Ford in general lagged well behind the other two manufacturers in overall wins. Matt Kenseth, who “turned to the dark side” by leaving Ford for Toyota, experienced his best season in a decade in his debut campaign with Joe Gibbs Racing. Penske had a win and plenty of laps led over the first three races this year, while RFR remained mired towards the back of the field. Those races involved three very different track types and the team struggled across the board; in short, 2014 was shaping up to be more of the same book we'd seen plenty of in 2013. 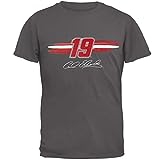 Bristol offered the fourth different track type in as many weeks. As in the two weeks prior, Penske got off to a great start by qualifying its teams near the front (second and fourth respectively). However, they weren't the only Ford team to show speed during qualifying. Marcos Ambrose drove his Ford to a fifth place start, Greg Biffle placed eighth, and Carl Edwards landed in twelfth. All of those represented a significant improvement over their respective average starts at the track. In fact, the only Ford driver to start outside of the top 25 was Travis Kvapil's 39th place run (he ended the race 33rd- his highest position all race long).

The odd late-race caution did little to mar Edwards' win. The only time the #99 slipped out of the top five during the last 200 laps came during pit cycles. He may not have had the dominant car early but he took his car to the front and kept it there over the course of the race. The biggest test to his lead at the end came from teammate Ricky Stenhouse, who now sits inside the top ten in points.

Just as important for Stenhouse, he finally had a run that showed glimpses of the talent that led him to consecutive Nationwide series championships. It's been a difficult start to his Sprint Cup career. For many fans, he's better known for dating Danica Patrick than he is for his on-track exploits. His Nationwide career started with a series of wrecked cars but those wrecks took place while running fast. Since climbing in the #17 car vacated by Kenseth, Stenhouse had only one top five and four top ten finishes before Sunday night. It was a breakthrough performance that should go a long way towards restoring the young driver's confidence.

Ford had plenty to crow about outside of Roush Fenway's one-two finish. Marcos Ambrose, who's averaged a finish of 15th place in his prior Bristol races, walked away with a fifth place finish. And perhaps the biggest surprise of the night came with Aric Almirola's third place finish. In nine previous Bristol races, the 30 year old had only one top ten and an average finish of 24th place. For Richard Petty Motorsports to place both of its drivers in the top five is a major accomplishment and gives hope that the organization may finally be turning the corner. The only dissonant note for Ford came from Penske; former Bristol winner Brad Keselowski was a disappointing 14th while Joey Logano never recovered from a power steering problem that put him several laps down prior to the rain delay at lap 125.

The only cautionary note is that Sunday's results may yet prove to be a mirage for the Ford lineup. Teams across the garage tested and set up for a Bristol afternoon race on a track that would rubber up as the day went along. Instead, overnight and mid-afternoon rains washed the groove clean on multiple occasions. The race finished under the lights with temperatures dipping into the forties. It's impossible to say just how much the changed conditions impacted the race results.

It's worth noting that several teams that run up front before the rains came were non-factors by race end. One such example is Dale Earnhardt Jr. The #88 spent the first quarter of the race inside the top ten and looked to be a contender to win the race. However, by lap 200 he was outside of the top 15 and never returned. Keselowski was another driver who suffered from the delay. While he didn't fall as far as Earnhardt did, his car never showed the same speed under the lights that it had during the day. Would the Blue Deuce have had a chance to win had the rains held off? We'll never know.

The next three weeks will go a long way in proving whether or not Bristol can be a launching pad for RFR and the rest of the Ford Racing team. The NASCAR Sprint Cup series visits two intermediate tracks (California and Texas) that make up the bulk of the post-season schedule. Kyle Busch is the defending champion at both and the JGR teams were strong at these tracks last season. Jimmie Johnson has won six championships and made a career out of running well at these tracks. RFR used to be a favorite but their speedway program was a step slow last season.

Yet sometimes what a team needs most is a hit of confidence. A dominating performance such as the one Ford had at Bristol can remind a team of just what they're capable of in the first place. With Penske's performances at the intermediate tracks last season, clearly horsepower isn't the problem. And while the Captain isn't in the habit of sharing information, part of what attracted him to the manufacturer in the first place was the “One Ford” team concept. He can't very well hold out now. So RFR is bound to benefit from whatever it is that Penske found at some point. Combine that information with their recent boost in confidence and Bristol may prove to be a launching pad for the team.

With the win, Carl Edwards has punched his ticket for NASCAR's playoffs. Despite his struggles, Greg Biffle will probably do likewise at some point; the Biff has at least one win in nine of his 11 full Sprint Cup seasons. Stenhouse may not be a favorite to win but he didn't take home two Nationwide trophies by running at the back of the pack. If RFR can find speed for the car under him, Ricky may very well also find his way into NASCAR's playoffs. It's a long shot but the fact that we can realistically have that discussion a week after things went so badly in Vegas is a good sign.

Finally, with a win in the #99's back pocket, the team can focus on finding overall speed and getting a win for the other two drivers. Drivers who win early in the season will have a tremendous advantage over those who qualify for the Chase later on; like Johnson has done in years past, they can take chances on equipment and setups, knowing that their spot in the playoffs is secure. In just a week's time, Roush Fenway has gone from life support to playoff bound. Indeed, the reports of their death were greatly exaggerated after all.

How many teams will Roush Fenway Racing place in the Chase?