The AEC Routemaster was specifically designed for London

The traditional Red Routemaster is one of the famous Tourist Icons of London. Yet it has gradually disappeared from the city's streets, this caused it to be one of the most important issues in the recent election for London's Mayor. The bus is famous for its reliability, it kept being called back into service to replace worn-out modern buses. All the same most of them have been retired and are now used for promotions or adventure transport all over the world.

Warning: Routemaster bus fans are probably some of the most obsessive fans that exist anywhere!

This lens has been awarded a Purple Star

The Routemaster bus is famous for its reliability and its open doorway which allow people to hop on and off in slow moving traffic where ever they wanted. It gives you a wonderful sense of freedom when you suddenly realised you could swap to a different bus or go by tube, or jump off and buy a newspaper, or just get off because you'd seen a friend or tourist site you'd like to visit. People also liked the bus because they had conductors (ticket sellers) who were often personalities and offered tourist advice.

photo by Dimity B Creative Commons

The new Routemaster Bus goes into service on Monday 27th February 2012. If there is a conductor on board then the rear door will always be open. It has a double staircase designed to allow people to get off and on the bus at the same time.

History of the Routemaster

The Routemaster bus was developed during the years of 1947-1956 , the brief being to replace London's trolleybuses, which had themselves replaced trams in London, and also the older diesel RT buses. 2875 were built and all but 115 were ordered by London Transport. In 1998 over 600 Routemasters were operating in London. Most surviving Routemasters are 72 seat 30 foot long RML class models, these can be identified by an extra shorter window halfway along both upper and lower decks.

Routemasters operated outside London on the Greenline service had enclosed rear platforms, as an open platform would not of been safe at the higher speeds obtainable on traffic-free roads.

Are you a Bus Fan Poll 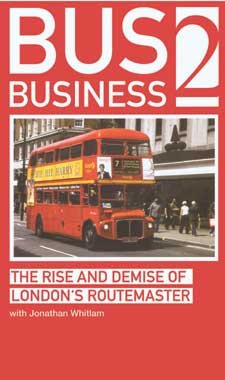 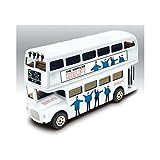 London Bus in Australia - RTL 547 in Sidney (Not a Routemaster, note the radiator)

Routemaster in the Falklands

Boris Johnson has vowed that his first act as Mayor of London will be to scrap bendy buses and replace them with a modern-day Routemaster.

Mr Johnson said that the controversial buses were abused by fare dodgers and highly dangerous to cyclists.

Many people think all old Red Buses are Routemasters but in fact there were many more RTs produced. The front radiator is the easiest way to tell them apart. The Routemaster has a wide split radiator grill and the Identification of type RM1111 (Route Master 1111).

The RT's have a tall narrow split radiator grill and are numbered RT1111.

The RT, which served from 1939 to 1979, and of which 4,825 were built, the most numerous class of London bus (just 2,760 Routemasters were built for London). The RT had a 7Â½ft wide chassis, the Routemaster's was 8ft. There were a number of places in London right up to 1979 that could only be served by RTs because the Routemaster was too wide.

RT's are rather gaunt and stern looking in comparison with the more rounded Routemaster.

The AEC Regent III RT was a double-decker bus produced jointly between AEC and London Transport. It was the standard red London bus during the 1950s. It was narrower than the Routemaster and was thus be used on certain routes where the Routemaster was too wide

Yes you can still travel on a Routemaster in London

From 2005 there are two Routemaster Heritage Routes 9 and 15

Jeremy presents a successful Motoring Programme on British TV called Top Gear. He hates buses that get in the way of his luxury sports car and decided to blow one up for his DVD. Unfortunately he chose to destroy one of the only 500 remaining Routemasters in the country. Andrew Morgan, chairman of the Routemaster Association, said: "It's just sacrilege and a very sad thing to do.

Routemasters on Film and on Television - Reference http://www.busesonscreen.net/

See the Link above in the Routemaster Web Links for screen shots of over a 100 films.

How to Visit London - Advice for Tourists

Travelcards for buses and tube

The London Travelcard and London Visitor Travelcard are the travel passes for short term visitors to London. The Travelcard is easy to purchase and as well as saving money also saves a lot of time obtaining tickets individually.

You can buy one, three, seven day travel cards. You can save even more money by buying the off-peak version.

Apart from saving you money the travel cards also you a lot of hassle, as you change from bus to tube to bus again freely without having to queue for tickets.

Tip: take a ride on the overground Docklands Light Railway which gives you magnificent views of London (use your travelcard)

Modern Routemaster Design Proposal for 2011 - One of two winning designs

This was not taken during Royal Ascot when the square would be crowded with elegant racegoers. The pub just seen to the right is the the first and last halt of those determined to have a great day out.

The splendid Routemaster, an icon of this great city sadly no longer in regular use- although some still survive as tourist buses. At the London Transport Museum

Buses in the News : Atheist Bus in London

Didn't know buses could be religious!

A Row Of Wonderful Routemaster Buses How to Tell a Routemaster Bus from an RT Bus

See the comparison image below

Sinclair C5 Electric Vehicle in a Carpark in Basingstoke

What's this got to do with Routemaster's you might well ask!

None really , but one of the reasons the C5 was a failure was that it could not be seen by trucks and buses

London Transport Museum at Covent Garden - Very Handy for Tourists with Uninterested Wives - Lots to see/shop near by!! Routemaster Buses in the News

Routemaster and RT Bus Side by Side for Comparison

Yep that's a Routemaster on the Right!

M&M's Routemaster Bus RM2561. This has been gutted to make an entrance into M&M World

A working Routemaster on a beautiful Spring Day

Red Routemaster Bus in a barn

Old Buses at Kingston Bagpuize including a Routemaster

Fabulous restaurant(s - one Thai brasserie, one British bar) in insanely luxurious boutique hotel (branches also in London & Beaconsfield). Also has farm shop attached. The interior has been done out very luxuriously (the seats have been removed)

There is small fleet of Routemasters doing a guided tour of Edinburgh. Doing a guided bus tour is a great way to learn about a town.

This bus was formerly a London Transport AEC Routemaster RM281 VLT281 on route 253 in Hackney.

The Gay Bus - Some People are Gay Get Over It!

The sides of Buses are ever popular to advertisers as it it allows access busy city workers, increasingly they are used to get campaign messages such as this across. The secret of this type of advertising is that the bus implies solidity and reliability it is a powerful medium.

Routemaster Passenger Feedback - I am a bus fan but not an expert so please be kind!