The Devil or the Deep Blue Sea for Allmendinger

Just 18 months ago, A.J. Allmendinger was at a peak in his NASCAR career. After years spent toiling for Red Bull and Richard Petty in non-competitive rides, Roger Penske tapped Allmendinger to replace Kurt Busch in the #22 after Kurt Busch's infamous flameout on reporter Dr. Jerry Punch. A failed drug test saw NASCAR suspend the driver and Penske drop him from the team. Since that time he's run a handful of races across multiple series in an attempt to get back into a full-time Cup ride. Now it seems Allmendinger will sign with JTG/Daugherty Racing to do precisely that. But accepting that offer would be turning down a different ride with Penske and once again put him in a car that isn't capable of winning races. For Allmendinger, he truly is caught between the devil and the deep blue sea for 2014.

A.J. first came to prominence as an open wheel driver in the Champ Car series before joining NASCAR. In three seasons, he won five races (all in his final season, 2006) and increased his points standing every year. With Champ Car's demise, Allmendinger accepted an offer to run for start-up Red Bull Racing in 2007. He showed brief flashes of talent but the transition to stock cars along with substandard equipment caused A.J. to miss 19 races that year. Poor qualifying plus sponsor investment in a failed F1 experiment for Scott Speed resulted in Allmendinger being released during the following season. He wasn't out of action long, gaining a ride when Ray Evernham's team parted ways with temperamental open wheel driver Patrick Carpentier. 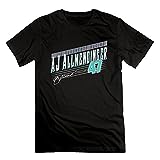 The re-named Richard Petty Motorsports believed in Allmendinger. They put him in the car despite having only partial sponsorship for the season. They gave him the iconic #43, the centerpiece of the entire operation, despite Allmendinger's arrest for drunk driving the previous season. The team's cars were not among NASCAR's elite but Allmendinger was competitive; he scored 24 of his career 30 top ten NASCAR finishes between 2009 and 2011 for RPM. He also increased his final points position all three seasons.

Yet when Penske came calling, Allmendinger felt he had no choice but to jump at the chance. Petty's cars had the ability to finish top 20 every race; Penske provided the chance to regularly score top 10s and compete for race victories. For the first time since Champ Car, Allmendinger would be in equipment comparable to that the race leaders ran. Yet his performance during that first year at Penske wasn't as good as his last with RPM and he was suspended by the series after testing positive for an illegal stimulant. His fall from grace was complete as Penske fired him shortly after the suspension.

Despite the firing, Penske did much like Petty did before him. He didn't race for Penske's NASCAR team but “The Captain” offered his support and something more important; hope. He had words of encouragement for his disgraced driver and put concrete action behind those words. Once re-instated by NASCAR, Penske put together a package to let Allmendinger run for his Indy Racing League open wheel team. The results weren't impressive; A.J. hadn't driven an open wheel car in years and even then it was for the road course series CART and not the oval-based IRL. But as Allmendinger himself noted, just being able to get in a car once again for Penske made a world of difference in his confidence.

A.J. has also returned to the world of Sprint Cup racing since the suspension. He's run several races for underfunded Phoenix Racing, finishing about as well as possible given the equipment and team support involved. More importantly, he's run a few races for JTG/Daugherty Racing this season. The team has employed veteran Bobby Labonte since 2011 with little success and was looking for a new point of view to see if it was the driver or the team that was the problem. While A.J. has scored only one top ten in three races so far but that's still one more top ten finish than Labonte managed in 21 starts for the team this season.

After three seasons, JTG is ready to move on from Labonte and add Allmendinger as a full time driver in the #47. While not an elite team, JTG has a steady sponsorship relationship with Scott Products (thanks in no small part to a co-owner in Tad Geschickter who has a long history in advertising) and a technical alliance with Michael Waltrip Racing. Kurt Busch's 2013 season with Furniture Row proved that given the right driver and technical partner can be competitive at the Sprint Cup level. Allmendinger may be that right driver and has a far higher upside than Labonte at this point in their respective careers. Reports earlier today confirmed that the offer has indeed been extended to Allmendinger for 2014.

But that's not the only offer A.J. has to consider for next season. Apparently he's also been offered a full time ride at the second tier Nationwide level to run the full season in 2014 for Roger Penske. Unlike the #47, a ride with Penske's Nationwide team would be fast from the start. They've won nine of the series 23 races this season including two wins by Allmendinger in two starts. While he's yet to run for the team on an oval track in 2013, the Penske cars have speed and would give A.J. a legitimate chance to win the Nationwide championship.

Moreover, a top level ride in the Nationwide series could provide Allmendinger the chance to find an elite cup ride down the road. Occasional Cup races combined with a full time Nationwide run was the path Brian Vickers chose two years ago and now he's back in a full time ride at MWR. It's the same strategy Regan Smith chose a year ago and he's in the running for the series title with JR Motorsports running Hendrick equipment. Patience could be a virtue for A.J.; there are few good Cup rides available right now so why get in a car that may lower your long term value?

The problem is that out of sight is often out of mind in NASCAR. Elliott Sadler is a cautionary tale for the Nationwide strategy. After a 2010 season that he essentially extorted out of Richard Petty Motorsports, Sadler found no high level takers on the Cup level. So he moved down to the Nationwide series full time. He has four wins to go along with two consecutive 2nd place finishes in the final standings during the last two years. Despite the outstanding finishes, no Cup team has come calling for Sadler. His name never comes up for the numerous teams with open rides for 2014 so it's unlikely he'll return to the Cup series next year either. After 15 years and 431 races, his Sprint Cup career seems to be over.

A.J. also cannot afford to ignore the loyalty that Penske showed him. The owner could have easily wished Allmendinger the best of luck in his future endeavors and moved on. Instead, he provided opportunities behind the wheel and support off the track. To turn down the Captain now would be essentially setting fire to the only real bridge A.J. has left in racing. Should the sponsorship and support issues be manageable, Penske could add up to two more Sprint Cup teams in the future. With a net worth of over $1B (that's billion, with a B), he certainly has the financial ability to support it.

Lastly, A.J. doesn't have the luxury of time. His performance after switching teams and series in the past show that he doesn't adjust to change well. He generally needs at least two seasons before delivering the kinds of results he's capable of. He'll enter next season as a 32 year old; far from ancient in racing but certainly no longer a “young gun” in the sport. Add a couple years to that total and he'll be in his mid-30's before fully adjusting to whatever ride he gets into next. So he may not have the option that Busch did in spending a single year with a team before moving on to a better ride.

His 2014 plans hinged on one simple question. What does he value more; winning races and running up front? Or being a part of NASCAR's highest level of competition? Thanks to his prior mistakes, he doesn't have the opportunity to do both right now. His decision for 2014 will go a long way into determining whether he ever does again.

Where should A.J. Allmendinger drive in 2014?