The high cost of NASCAR's inaction on SAFER barriers

For years, International Speedway Corporation has resisted calls to pad every inch of wall at their tracks with SAFER (Steel and Foam Energy Reduction) barriers. Despite several horrifying accidents on exposed walls, NASCAR's track ownership arm has continued the band-aid policy of adding barriers only after an incident- and even then, usually only on or near the incident area. With yet another such accident occurring on Saturday, ISC (and their counterparts at Speedway Motorsports Inc.), need to stop pretending and start building.

With NASCAR's signature event only a day away, Kyle Busch was running yet another race in the newly renamed Xfinity Series. Nearing the race's end and trying to bump his way to victory, Busch was collected in a multi-car wreck and saw his #54 Monster Energy Camry go head-on into the infield wall past the end of pit road at nearly 100 miles per hour. The impact visibly shot his rear wheels into the air and saw Busch taken away from the accident scene on a stretcher. The camera shot of Busch's ambulance driving away was eerily similar to that of Dale Earnhardt Sr's last ride from the same track 14 years ago.

A quick glance at Twitter confirmed the obvious reaction, with several drivers asking why the exposed wall was there in the first place. ESPN's Marty Smith put on a spirited endorsement for SAFER barrier's on SportsCenter. Columnists had little trouble dusting off similar past articles and splashing them across the main pages of every major sports news site.

The speedway itself was in full damage-control mode. Employees were hard at work loading tires against the unprotected wall where Busch hit. Daytona International Speedway president Joie Chitwood III announced that the track would install SAFER barriers on every inch of track after this weekend's race.

Yet the question remains, why wasn't that the case long ago? Daytona is the crown jewel of NASCAR. It hosts the series' biggest race and some of its tightest racing. It's also the same track that launched NASCAR's safety consciousness after Earnhardt's death. With cars traveling three-wide and ten deep at over 200 miles per hour, no other track outside of Talladega is quite as likely to send cars in unpredictable directions.

The tired excuse trotted out before has always been money. NASCAR claimed on many occasions that it brought in outside consultants who studied the tracks and their accident histories, then installed the barriers where those experts recommended. They reminded us on many occasions just how expensive the barriers were and at times laughed at the thought of covering every inch of a track with steel and foam.

Nobody is laughing now. 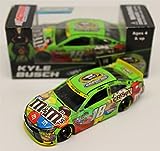 Cost estimates vary but recent estimates put the price at somewhere near $500 per foot of track. On a 2.5 mile superspeedway, that's five miles of barriers. Throw in both sides of the pit road retaining wall plus the various curved entrance and exits to the infield and you're likely talking about seven miles (36,960 feet). That's a total cost of $18,480,000, a significant dollar figure even for a company the size of ISC/NASCAR.

Yet that cost is also one that ignores a couple of key facts. First, a fair amount of the track already has the SAFER barriers in place. The money's already been spent and the equipment is there. Second, even if the construction were to start from scratch, it would be a drop in the bucket compared to what ISC is already spending at Daytona for capital upgrades. The track is in the midst of $400 million spending projected called “Daytona Rising” designed at improving the fan experience. This comes only a few years after ISC spent approximately $20 million to repave the surface.

Of course, it's fairly easy to argue that having Kyle Busch in the 2015 Daytona 500 would also improve the fan experience. Even the fans who hate him will admit that Busch's absence leaves a major void in this year's race. We will never know for certain but it's highly likely that had SAFER barriers been in place Saturday's wreck would have been just another day at the office. The long history of high-impact accidents into these barriers- and the equally short list of major driver injuries hitting them- is proof of that.

The other cost-related argument about the barriers is that they would be equally useful at NASCAR's other tracks and that those tracks do not have the same financial ability that Daytona does. While no track has the same NASCAR pedigree that Daytona does, the fact is that all but one of NASCAR's Sprint Cup tracks have the ability to cover this kind of costs. After all, they are all owned by a small handful of companies. ISC owns 12 (13 if you count the ISC-dominated Dover Motorsports Inc.) while Speedway Motorsports Inc. owns eight. Only the Indianapolis Motor Speedway and Pocono Raceway fall outside their umbrella.

A cursory look at the financials for both ISC and SMI both show a healthy balance sheet. ISC's recent year-end SEC filings for 2014 showed a net income of over $67 million, up from $45 million a year ago. SMI has not yet announced their 2014 full year numbers but the third quarter filings showed the company with a net profit of $44 million year to date versus a net loss the year prior. And neither of those figures includes the huge increase in television revenues that both companies will see in 2015 with NASCAR's new television agreements.

Meanwhile, the cost of a driver injury is incalculable. The hint of danger is part of auto racing's allure to the general public but when drivers are unable to compete due to injury, the sport as a whole suffers. Fans become disinterested when their favorite is not in contention. Government authorities become interested when people are hurt or even killed live on television. Ask baseball how well things went for them when steroid use caught the attention of Congress. Do you think Brian France and Mike Helton have any desire to repeat that experience, explaining the driver's death that they could have prevented?

Those are the kinds of costs that ISC and NASCAR now face paying. Their biggest event is now going to be held without one of its most notable drivers. Joe Gibbs has to explain to his sponsors just why their car will be piloted by a lesser driver in the season's most important- and most watched- race. And it's all because of a wall that never should have been there as it was in the first place. The accident will likely spur more action toward SAFER barriers and prevent future injuries elsewhere. Not that it will do much good for Kyle Busch or this year's Daytona 500. That's just another high cost to NASCAR's prior inaction on the subject.

Here's hoping we're not having the same discussion after another accident in 2015.

Has NASCAR done enough in regard to SAFER barriers