Time to ease up on MWR rhetoric

Since Saturday night's race at Richmond ended, NASCAR's world revolved around the events summed up as “Spingate”. After taking two days to investigate, the sanctioning body came down hard on Michael Waltrip Racing for, in their words, attempting to manipulate the finish of the Federated Auto Parts 400. Despite getting their pound of flesh, many NASCAR commentators continue to call for everything short of Michael Waltrip's firstborn child. But it's time to set down the torches and pitchforks. It's time to place the proceedings in their proper perspective and to move on.

From following the #NASCAR feed on twitter it seems that there is no comparison too broad or too far to be used to describe what happened Saturday night. My personal favorite was the Nazi defense; that Clint Bowyer and Brian Vickers cannot say that they were just “following orders” to defend their actions. Because after all, nothing says a power-mad, genocidal form of government like trying to get your team into NASCAR's playoffs, right?

Another popular comparison was to the 1919 Black Sox. For those of you who weren't around for the events of those days (or who missed 'Field of Dreams'), that was a gambling scandal that rocked the baseball world. The 1919 Chicago White Sox were heavy favorites to win the World Series but instead of playing to win, their players took a payoff from Mafia gamblers to lose the series. When baseball caught wind of what happened, the players were banned for life. The theory being that fans need to know that what happens on the field is on the level, that they are not watching professional wrestling. On the surface, the comparison makes sense, doesn't it?

For one thing, there's a huge difference between trying to help a teammate and conspiring with criminals to throw a sporting event. A better parallel would be to look at last year's race at Homestead. Brad Keselowski carried a huge lead into the finale and was widely expected to win the title. For this to be a Black Sox-esque situation, he would've had to have taken a payoff from the Gambino family to conspire with Jimme Johnson and swing the title over to the #48. That isn't what took place here. 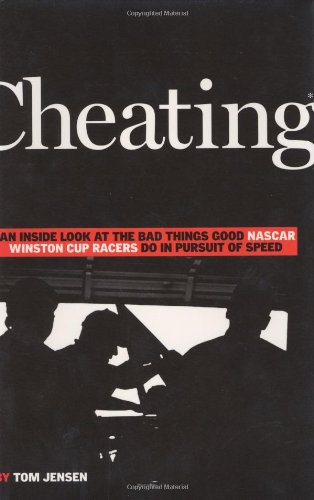 Cheating: An Inside Look at the Bad Things Good NASCAR Winston Cup Racers Do in Pursuit of Speed
Buy Now

Even assuming all of the accusations out there are accurate, what MWR did was take the concept of working as a team further than NASCAR or its fans wants to see. Bowyer didn't take Gordon or Newman out of the race with a well-placed fender. Truex didn't race in a car overflowing with “innovations” to help him go faster. Heck, Vickers didn't pull off the track at lap 5 with a mysterious vibration to ensure the other MWR cars finished ahead of him. When Bowyer was leading he didn't pull over or hold up the race pace in an attempt to give Truex a shot at leading a lap.

Yet all of those things are items that have taken place in the past- and have taken place with minimal complaints from many NASCAR fans. Remember the final race Neil Bonnett ran? If you blinked you might have missed it. It was the 1993 Hooters 500 in Atlanta, where the sole reason Bonnett entered the race was to ensure he finished behind Dale Earnhardt Sr. He pulled off the track shortly after the race began and Earnhardt won another Winston Cup. Did the NASCAR fan base get up in arms about Bonnett's start and park? Was it viewed as an attempt to “manipulate the race results” and decried by media members left and right? No.

We don't need to go very far into the history books to find a championship contender getting wrecked either. Just a year ago, Clint Bowyer's Chase hopes went up in smoke thanks to an irate Jeff Gordon's fender. The same Gordon who was edged out by last Saturday's events, by the way. Gordon's anger came from how Bowyer raced him over the course of 2012 but there's no ignoring the fact that Bowyer falling out meant Jimmie Johnson was the only viable contender left to challenge Brad Keselowski. Gordon's actions clearly helped Jimmie- and himself, in reality. Gordon is a part-owner of Johnson's car, after all. Bowyer's fans weren't happy about what happened but you didn't see Stephen A. Smith questioning Jeff Gordon's integrity on SportsCenter the way we saw him questioning Michael Waltrip's.

The irony is that so many NASCAR fans cry out for a return to the “good ole' days” when winning mattered and second place was the first loser. Yet those days were filled with crew chiefs and drivers who lived by the motto, “If you're not cheating, you're not trying.” There are books written about what they did to try and get an edge on the competition. They weren't simply trying to gain an edge; they were trying to (all together now) manipulate the results of the race. And we celebrate it. We celebrate NASCAR's bootlegger heritage, one that viewed in the same self-righteous light is nothing more than a bunch of law-breakers thumbing their nose at justice.

Certainly some of the anger expressed by NASCAR observers is genuine. But one (who shall remain nameless) was particularly grating to listen to. While he's relatively inactive on twitter, he took the time to post a tweet today with his thoughts on the subject. Or rather, a tweet that said to watch the TV for his opinion on it. Then when he did appear on TV later in the day, he was full of righteous indignation and virtually in tears with how “upset” he was about what happened. It was a virtuoso performance. Yet if you're so disgusted by what happened, please explain to me why we needed to see you say it on TV? If the events so moved you as a member of the NASCAR community, why was your only post on the subject a promo to your later TV appearance?

The reason why is simple; “Spingate” is nothing more than a vehicle for some. It's a vehicle to bash NASCAR for those who don't like it to begin with. It's a vehicle to get on major sports and entertainment shows that otherwise would never return their calls. It's a vehicle for people to get on TV and pontificate about how evil MWR is (oh, and did you know they used jet fuel six years ago? They sure did! Pack o' cheaters those boys are!) and how they need to be punished to save auto racing.

So let's dial down the rhetoric a notch or three. What Waltrip and Co. were trying to accomplish was foiled; Truex is not going to make the Chase. Bowyer, who was locked into the Chase before the night even began, remains there. Depending on whose side you take, Gordon either got his karma back for Phoenix or will get to even the score at some point over the next ten races. “Boys, have at it,” is alive and well, after all- and something suggests NASCAR will be looking the other way when it happens. The whole thing simply isn't worth the level of vitriol being spent on it. Richmond is in the rear-view; it's time to remember that and move on to Chicago.

Did NASCAR do right with its punishments of Michael Waltrip Racing