Time's up, pencils down on the NASCAR Sprint Unlimited

Saturday night's NASCAR Sprint Unlimited may not have paid any points but it was an enormous learning experience for the drivers involved. A multi-car pileup early in segment two only highlighted the many similarities- and many differences- that will become a part of NASCAR's opening race in just one week. It's a safe bet that we'll be hearing the phrase “closing speed” once or twice, and its impact on the 500 itself should prove to be entertaining if nothing else.

Check out the history of Daytona on DVD 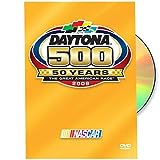 A year ago, a Daytona 500 that featured a single lane of racing for much of the afternoon did the unthinkable; it made some fans actually miss the tandem drafting so unpopular in years past. Any driver who dared to pull out of line and make a move was summarily freight-trained to the back. With restrictor plates leveling the field from a horsepower perspective, the aerodynamic penalty for pulling out of line made it nearly impossible to pass without at least five to ten cars doing likewise.

Saturday night provided the antidote. This year's version of the car (primarily the increased superspeedway spoiler size) creates a much larger hole in the air and the drivers capitalized on the push. The combination of a larger hole in the air and other minor adjustments in the aero package resulted in cars capable of making a pass. The basic feel of Daytona racing remained the same; you need to pick your spots and read the draft to move forward. But it WAS possible to move forward, something that puts this year's car light years ahead of where it was in February of 2013. Instead of punishing the attempt to pass, this package seems to reward aggression.

The segment two wreck also highlighted another piece of the aerodynamic puzzle; the increased speed at which one car could close on another. Indeed, the reason why passing became possible was just how fast one car could close on (and get by) another. The wreck occurred because Matt Kenseth misjudged just how fast the line on his inside was moving and Kenseth went sideways across the hood of Joey Logano's #22 Ford.

Closure rate has always been a feature of restrictor plate racing. During the last iteration of plate racing, closure rate became a factor when drivers would swap places in the tandem. The handful of seconds they spent running side by side slowed the pair down to the point another pair of cars (lined up nose to tail) would quickly close and pass. A high closure rate would also occur when cars running solo around the track would lose the draft and eventually be engulfed by the pack.

But a high closure rate traditionally has not been an issue for cars running together in the pack itself. The inside or outside line might be moving but the speed difference between the lines themselves was negligible. This enable drivers to better gauge their moves between lines and gave spotters time to clear their drivers in or out. As Kenseth's spin proved, that time may be a thing of the past. When one line is moving so much faster than the other, holes will open and close on a second by second basis. There simply isn't time to think or hesitate. Drivers will have to wheel the car based far more on instinct and guts than has been true in years past.

Before Kenseth livened up the proceedings, perhaps the biggest issue over the first portion of the race was Fox's experiment with moving the scrolling update bar. NASCAR fans have become accustomed to seeing a steady ticker across the top of our screens updating us on who is in what place. TNT took the bar to new heights (or lows) this past season with an accompanying advertising bar that covered over a third of the screen. Fox decided to give fans that portion of the screen back and move the update bar to the far right of the screen. I'm sure they thought being able to see the rest of the screen would be an “innovation” and that fans would welcome to see a portion of the race that had been off-limits for over a decade.

Not exactly. With the very first pop up of the bar, NASCAR's twitterverse exploded. Most poked fun at Fox for the new menu but a fair number of fans seemed genuinely upset. I'm guessing they were the ones watching on traditional width televisions; with modern HD broadcasts designed for widescreens, a pop up covering the far side of a screen would be even more intrusive. Back to the drawing board, guys.

It Pays to be a (Pole) Winner

In listening to the comments from a variety of drivers on Saturday, the common refrain was just how different this car seemed to run in traffic as compared to a year ago. In listening to the television coverage, you could hear the longing in the voice of drivers such as Clint Bowyer not involved in the Sprint Unlimited. Carl Edwards, who wrecked out long before the final segment began, spoke to just how much he learned in the few laps he was on the track.

Without a doubt, the lessons learned on Saturday night will be directly transferable into next week's Duels and Daytona 500. There's a vast difference between seeing the closing rate on television and experiencing it in your rear view mirror; an ocean of experience between feeling the side draft through your right foot and through your eyes. In a sport where inches can be the difference between first place and a DNF, those lessons will be crucial. It's just one more added benefit to winning poles over the course of a year.

No matter what car NASCAR brings to the track or what drivers are still behind the wheel, Daytona is still Daytona. As long as NASCAR mandates restrictor plates under the hood, the racing is going to have a similar feel. Cars will run far too close to one another at 200 miles per hour and drivers will be asked to make super-human decisions for hours on end. Not every driver has the same level of driving skill or the same hand-eye coordination and the end result is the fabled “big one” that occurs several times a year. Saturday night featured the cream of the crop and only a handful of cars on the track by race end.

A week from now, the Daytona 500 will feature more than double the car count. The level of driver skill will vary from the sport's elite to others at both ends of the career spectrum. If the very best had trouble gauging the on-track holes available, what might the Great American Race look like? We only have one more week to find out.