Going into this weekend's Irwin Tools Night Race at Bristol, all the signs are there that this race may well not live up to expectations. Too many drivers too close to the Chase bubble may very well end up with less action and more caution on the racetrack. With only three races to go before NASCAR's playoffs, no one wants to use the chrome horn too aggressively because the risks just don't outweigh the rewards. If NASCAR wants to bring back more beating and banging on the track then the date has to change.

The Bristol Motor Speedway night race used to be one of the best shows and toughest tickets in all of NASCAR. Multiple speedway expansions that increased seating couldn't keep up with the demand. With only one true lane to get around the track the only way to move forward was to move someone else out of the way. The night race in particular has been home to some of NASCAR's most exciting finishes and was the subject of a speedway promotion this past season entitled “Bristol Battles”. The very fact that so many such rivalries could be legitimately advertised should tell you something of what this track and this race once was.

Fantastic Finish to the 1995 Night Race between Earnhardt and Labonte 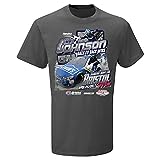 Many point to the 2007 track upgrade as the source of Bristol's troubles. The upgrades resurfaced the concrete track, which was long overdue. The upgrades also widened the track by three feet and added additional banking close to the wall. These two changes (a wider track with variable banking) were designed to finally add a second lane to the speedway. The thought was that with more room to pass the on-track action would become even better.

Instead, Bristol became the home of long green flag runs and little on-track drama, particularly at the Cup level. The resurfacing combined with a greater emphasis from Goodyear on hard tires resulted in less tire wear as well. Instead of flared tempers and double digit cautions, Bristol races became home to green flag pit stops and fuel mileage strategies. The very thought was anathema to many long-time Bristol fans; ticket sales and television ratings plummeted. The track that barely had to advertise suddenly found itself scrapping to sell tickets.

Track owner Bruton Smith hasn't been blind to these trends and he's trying to restore his cash cow. The traditional promoter tactics of ticket packages and hotel owner discussions have been tried. He's spent a small fortune to grind some of that new concrete off the speedway, trying to eliminate the advantage gained by running the track's high side. That didn't eliminate the extra three feet of track but at least it showed they were trying.

The one thing Smith and NASCAR have studiously avoided is discussing the other major reason why racing at Bristol isn't all it once was. Prior to the Chase, most teams knew what they had by August in terms of their championship eligibility. Aside from two to four teams, they knew that they wouldn't be holding the (then) Winston Cup trophy at the end of the year. So when they unloaded at the racetrack, the primary concern was winning. The secondary concern was a decent finish to help themselves finish as well as they could in the standings.

There's a certain freedom in knowing you can throw caution into the wind and go for broke. A wreck isn't going to ruin your championship chances. The reward was a win in one of NASCAR's premier races and the penalty was minimal. Everyone bumped into each other at Bristol; most drivers understood that as the cost of doing business at the bullring. Moreover, if you had a problem with another driver elsewhere, Bristol was a great place to settle the score. The never-ending conveyor belt of cars ensures that your rival is going to show up sooner or later. I can only imagine the smile that must've appeared on Earnhardt senior's face every time the #3 hauler pulled into the infield.

The Chase has changed all of that. With NASCAR's playoff system, twelve different drivers have an equal chance at the championship come September. No matter how up and down your season has been, if you make the Chase there's always the chance to catch lightening in a bottle and win a title. Tony Stewart's 2011 is the exhibit A for why making the Chase can make your season. They struggled mightily throughout the regular season but squeaked into the playoffs. Five wins in ten races later, Smoke was a three time NASCAR Sprint Cup champion.

Every team and every sponsor knows that story and it's implanted on their collective conscience come August. Make the Chase. Once you're in, anything can happen. It's a ten race playoff with a multi-million dollar prize in earnings and a virtual guarantee for sponsorship the following year. For the elite teams, making the Chase enables them the funding to maintain their technical advantage. For a mid-level team, making the Chase is the golden ticket to sit at the big boys table in November. As a result, making the Chase becomes an end unto itself for most teams.

To make the Chase, you cannot make mistakes. You need steady, consistent finishes. NASCAR's points system penalizes you more for a bad finish than it rewards you for a win. That's why Brad Keselowski, sitting on the Chase bubble, came in for a splash of fuel at Michigan instead of rolling the dice on a win. That's why he stuck to Kyle Busch's bumper at Watkins Glen instead of using the chrome horn to move Busch out of the way and potentially win the race. In that case, second truly was better than first and Keselowski admitted as much after the race.

So with so few races left before the Chase, drivers have very little motivation to engage in the type of beating and banging that made Bristol famous. They cannot afford to take risks because the stakes are so high. Better to run a solid fifth place and keep in Chase contention than to pull a slide job that might wreck someone else because that someone else may decide to put you in the wall once they're 50 laps down. Whether forward or backward, Bristol would benefit greatly by moving its second date.

Going forward would mean moving the race into the Chase itself. Aside from benefiting Bristol, having this race in the Chase would help NASCAR as a whole. For years, one of the primary criticisms of the system is that the bulk of the races are on the intermediate 1½ mile tracks that favors some drivers over others. Adding Bristol puts a second true short track into the mix. A Chase race in Bristol would also enable NASCAR to move yet another critical race to Saturday night (and from direct competition with the NFL).

Going backward would mean moving the race closer to the first Bristol race but that wouldn't be the end of the world. Pocono hosts two races seven weeks apart and is one of the few tracks on the circuit whose attendance is rising of late. The close dates haven't hurt them; indeed, they've used the first race to help sell tickets to the second. By holding the race in late May or early June, teams know they still have months to go before the Chase itself shakes out and there is plenty of time to recover from a wreck.

Is moving the Bristol date perfect? No. The “old Bristol” is gone for good, buried under the sea change that took place in NASCAR as a whole over the past 15 years. Drivers by and large are less likely to think the bump and run is worth it. The “rubbin' is racin', son!” attitude that many fans fell in love with at the track has been replaced by a culture that values consistency and good corporate citizenship. But scheduling the race so close to the Chase cutoff handcuffs the drivers and makes the kind of race fans want virtually impossible. With so much to gain and so little to use, it's worth seeing if the world's fastest half mile might be a little more racy at a different time of year.