What Martin Truex Jr. signing means to Furniture Row and to Truex

This past week, word leaked that Martin Truex Jr. would replace Kurt Busch and join Furniture Row Racing for the 2014 season. It was perhaps one of the worst-kept secrets to end this year's silly season. After losing sponsor NAPA in the fallout from Richmond, Michael Waltrip Racing publicly stated their intention to run only two teams in 2014. With both Brian Vickers and Clint Bowyer committed to those two teams, Truex had little choice but to seek employment elsewhere. With most top-tier teams already set for 2014, the veteran had few options other than the Denver-based RCR satellite. But what came about as a last-ditch option may turn out to be the best possible thing Truex could have done.

Despite not yet winning a race, 2013 has proved to be a breakout time for Furniture Row Racing. With Kurt Busch behind the wheel, the team finally has an elite driver who's shown just how good the team can be. He's helped carry the team into the Chase for the first time in its history. While the run has exposed some of the team's weaknesses- in particular its small margin of error in terms of pit stops and parts- those weaknesses are things that can be improved upon. Pit stops can be practiced. Quality control and supplier upgrades can improve part reliability. It's much easier to fine-tune those issues than it is to build an engine-chassis combination that has the speed necessary to be competitive. That part of the team's development is done and their 2013 Chase berth proves it.

Part of that development can be traced to Furniture Row's tighter technical alliance with Richard Childress Racing. Mark McArdle, now the RCR Director of Racing Operations, spent the last four years in a similar role for Furniture Row as well (commuting between the two shops). Busch participated in RCR's weekly driver meetings as the de factor fourth RCR team member. The free flow of information on matters ranging from engineering in the shop to best lines on the track has lifted the performance of all involved.

Yet the current level of information sharing has its limits. With most of the drivers involved going elsewhere in 2014, there is little incentive to build for the future. Kevin Harvick and Busch will be heading to Stewart-Haas Racing next season. Jeff Burton's 2014 plans are up in the air but they won't involve RCR. Only Paul Menard will return to the team next season and he's been a non-factor for most of the year. What Busch and Harvick learn at the end of this season will go solely to benefit SHR next year.

Next season will provide a level of stability for the teams that will encourage better communication on virtually every level. Austin Dillon will move from Nationwide up the Cup car and return the famed #3 to active competition. He's and brother Ty are the future of RCR and will get every possible opportunity to make good for the team. Ryan Newman is on board for the long term and will be the team's elder statesman for the foreseeable future. And Menard will be a part of the operation for as long as his family wants to support his NASCAR exploits; he's unlikely to sign elsewhere however for a variety of reasons. This group has every reason to support each other because they're going to be working together for years to come.

Martin Truex is a hybrid of the three RCR drivers. Like Newman, he is a NASCAR veteran. He has two Nationwide championships to go with two wins and two Chase berths over his career. Yet at 33 years of age he's still in the prime of his driving career. Since moving from Dale Earnhardt Inc. to Michael Waltrip Racing he's steadily improved his performance every year. And it's worth noting that Truex is a driver who doesn't beat himself. He doesn't get involved in the kinds of on-track skirmishes and pit road miscues that can weigh down a team.

The status as RCR's de facto fourth team (fifth if you count new RCR partner Germain Racing) also has other advantages for Truex. He'll have several other drivers to trade ideas with all with their own combination of talent and experience. Given his experience he'll have the opportunity to be in a leadership capacity, a first for his Cup career. Yet at the end of the day he's still the lone driver in a single car outfit. He has the freedom to do what's best for Martin Truex Jr. He won't be submarined by the actions of a teammate and his success will depend on what he does and only what he does. That has to comforting right now.

Truex will also benefit from having a total lack of sponsor concerns. Getting booted out of the Chase was bad enough, but to have his sponsor NAPA- who'd been with Truex since he joined MWR and signed a contract extension in the last year- pull the plug had to hurt more. No matter how iron-clad the contract, Truex would rightly wonder if his new sponsor would do as NAPA did if they were dissatisfied in any way. But at Furniture Row, he is safe from that kind of action. The sponsor is also the team owner. They're all-in with Truex. They won't pull their support from the team unless they're folding up shop entirely. It's a level of comfort and stability Truex desperately needs to be successful coming off the debacle at MWR. 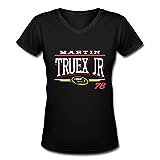 It's difficult to say what other options Truex had other than Furniture Row. Rumors swirled around a possible fourth team at either Roush Fenway or Joe Gibbs Racing but neither team felt they were ready to add a fourth team. Under different circumstances, RCR itself might add a fourth team. But with Ty Dillon a year or two away from joining brother Austin at the Cup level, Childress isn't going to make a long-term commitment to put another driver in that slot. And it's doubtful Truex wants to go through the uncertainty about next season's ride all over again.

As a team, Furniture Row will only be better next year for their experiences this year. They now know what it means to be a championship contender and what it takes to run at the highest level. They will learn from the mistakes made this season and will be able to work on those mistakes in the coming off-season. It's the equivalent of a football team making the playoffs for the first time only to flame out in their opening playoff game. Only by actually doing it can the team truly understand the pressure and the focus needed when the lights are at their brightest. The knowledge will be invaluable for Truex in 2014. He's made the Chase twice before (albeit with fairly pedestrian results). He's also won the aforementioned Nationwide championships. He saw teammate Bowyer run second in the title chase last season. He understands the difference between regular and postseason; the team he's joining now has that knowledge as well.

So while it may not have been his intention, Truex joining Furniture Row Racing for 2014 may turn out to be quite a blessing in disguise. He'll leave behind the controversy of Richmond and return to the manufacturer he drove to a pair of Nationwide series championships. He'll also have a security of sponsor nearly unmatched at the Sprint Cup level (ironically the driver he'll be replacing is the only other person with a similar arrangement for 2014). With RCR and Germain on board for next season, Truex will have all the support he needs while remaining free to succeed or fail based on his actions alone on the track. After what he's been through in the past month, perhaps that more than anything else is why Truex signed with Furniture Row.

How will Martin Truex Jr. do next season for Furniture Row Racing?