Why Hendrick will celebrate another Sprint Cup over Gibbs at Homestead

If nothing else, Phoenix showed us the difference between a great season and a championship one. Crew chief Jason Ratcliff is taking plenty of heat for Matt Kenseth's collapse in Phoenix thanks to a 25 second pit stop. Yet the criticism for the pit crew's failure on that one stop is unfairly landing on his doorstep. The real crime for Kenseth's team wasn't one bad pit stop; it was putting him in a car that was both far off its best and unable to be adjusted any closer as the race progressed. Their luck finally ran out and once again Joe Gibbs Racing was left on the outside looking in at Juggernaut Jimmie. It may be time for Joe Gibbs Racing to take a hard look in the mirror at some of its underlying principles if they are ever to beat Hendrick on a regular basis.

Despite what you may have read, Kenseth wasn't a pit stop away from running up front on Sunday. With various teams on different pit strategies, the field was in constant flux. Drivers found themselves near the front of the grid only to drop 20 spots after hitting pit road. In fact, Kenseth found himself only a handful of spots behind Johnson after the ill-fated attempt to take four tires; the #48 team's pit performance was only marginally better on that stop. With the worst possible result from changing tires, the #20 was still in the championship conversation with Jimmie in sight.

The difference was that when the green flag dropped once again, Johnson moved forward while Kenseth stagnated and eventually slipped backwards. It was the same story all day long. Kenseth had little ability to move forward, falling behind numerous drivers he'd normally pass with ease. His struggles were so noticeable that commentator Dale Jarrett had to point it out when Matt actually managed to pass a couple cars during one green flag run. It was newsworthy because it happened so rarely.

Kenseth's comments on the car were telling. During the race, he was flummoxed as to what to tell the crew about the handling. Afterwards, he noted, “We were just off and just could never quite get it right.” Ratliff agreed, noting on the radio that he was going to just stop making adjustments at one point and try to use strategy to gain track position instead. As was once noted of Ricky Bobby, he just had a bad day. What has made Kenseth's Chase to date so surprising is that the team simply hasn't had those bad days. Prior to Phoenix, his worst playoff finish was a 20th place at Talladega that was a product of picking the wrong line at the wrong time; he led 20 laps and was up front a good portion of the day.

Yet there's a reason why Kenseth finished the regular season in sixth place and nearly a full race worth of points behind the leaders. Despite winning five of the first 26 races, Kenseth's team was not consistent. A look at Kenseth compared to the other non-wild card entrants is illuminating. Kenseth's average finish over the first 26 races was 13.10, slightly better than the group average of 13.80. Matt also led 16.48% of the laps for those races, better than any other Chase entrant. Those numbers are about what you'd expect of someone who started the playoffs as the #1 seed with five victories.

What those numbers hid was the #20 team's inconsistency. No other driver in the top ten had more DNFs than Kenseth's three (teammate Kyle Busch was the only other person with as many). That average finish was nearly five spots lower than Matt's average start (again, only Kyle Busch had a larger drop at 5.24 spots per race). Kenseth and KyBusch were also the only drivers in the top ten who ran less than 95% of the scheduled laps during NASCAR's regular season (the average of this group was 96.31%). In short, while Busch is the one with the “checkers or wreckers” reputation, Kenseth was right on his tail in that respect.

So the odds of a Joe Gibbs Racing team being able to go ten consecutive races without a dud was minimal based on their regular season. Statistically speaking it was bound to happen and the fact that Kenseth managed to stave off the inevitable until race nine is actually a job well done. It seems like Kenseth was thinking much the same thing during both pre- and post-race interviews where he talked about how the season was a success no matter what happened over the last two races. Moreover, he knew better than anyone else what the did- and did not- have in the car this past weekend.

This is not a new phenomenon for the team. Since their first championship season back in 2000 with Bobby Labonte, JGR has counted on running up front and above-average luck to win its championships. There's a certain amount of logic in that; when you have guys like Tony Stewart and Kyle Busch in your stable, you play to their strengths. You give them cars that are fast and on the edge in terms of reliability because that's how those guys race. Labonte was a prime example of this. In his championship year Labonte finished every race; in his other seven years at JGR he had more than twice as many DNFs (34) as wins (16). Stewart ate six DNFs during his 2002 title run, managing to win only because his competition stumbled harder when it mattered most. He corrected the problem when he won again in 2005, failing to finish only one race. Of course, the 11 DNFs over his final 3 years at Gibbs may have been a part of why he moved on to begin with.

But no matter how good a driver is, the era of 2002 is long behind us. No one is going to win a Sprint Cup title with six DNFs, especially when the competition in Jimmie Johnson is averaging a top five finish every single race. Another Hendrick driver, Dale Earnhardt Jr., is a failed engine away from doing likewise in the #88. Those teams have found the fine edge between speed and reliability and they ride it on a weekly basis. Kenseth's season has no doubt been an impressive one. With seven race victories, he's been a part of the discussion to win almost every weekend this season. Even when he's failed to finish he's been in the conversation before dropping out. But there's an enormous difference between winning races and winning a championship. 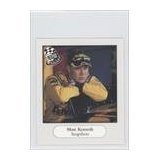 Kenseth of all people should know that; his lone title season came with only one race win that year. Kyle Busch won eight races in 2008 but finished tenth in the season standings. NASCAR has always valued consistency over wins. That's been the chief complaint of those against both the old and new points systems; wins are not rewarded enough and a championship comes from top tens instead of wins. But it's not as if the points system is a surprise to the drivers, owners or crew chiefs. They know what's required to make a championship run.

Both Kenseth and Kevin Harvick are now left to play for a Jimmie Johnson mistake but know the odds are against that. Mistakes during the Chase have been in short supply for the #48 team. Last year's meltdown notwithstanding, Johnson knows how to maintain a lead going into the homestretch at Homestead. You can bet his engine will be a step back on horsepower and a step up on reliability and the chassis will be tuned to be competitive but in solid control. He'll also have three teammates that will do anything short of taking a dive to help Johnson finish in the top 20 (which is all he needs to do to secure the title). For all their wins, JGR will not be able to muster the same level of support for Kenseth.

As Harvick said at the end of Phoenix, miracles do happen and we may yet see one at Homestead. But if not, it will be interesting to see what lessons Toyota in general and Gibbs in particular take away from a season that saw so many race wins- and so many struggles- all at the same time.

Do either Kenseth or Harvick have a realistic chance to catch Johnson?