Welcome to my Hub Page about the McLaren Technology Centre, an innovative and eco friendly building that is the headquarters of the McLaren Formula Racing Team.

One of the great advantages of design and why its an area of my passion is that design knows no bounds, It can cross multiple industries and areas. Here you will find some basic information of one of the innovative building today. This is probably a fact which most racing enthusiast would not know about McLaren.

The centre's architect is designed as a semi-circular, glass-walled building by the architect Lord Norman Foster & David Nelson of Norman Foster and Partners. The project started in 1998 and completed in 2004. and in the following year the architecture and design was short-listed for the 2005 Stirling Prize. Since then it has won numerous awards and rumored to have costed Â£300 million.

One of the innovative designs of the McLaren Technology Centre is the environmental friendly use of water integrated into the Air Conditioning and cooling system of the structure. The semi-circular building is accompanied by a series of artificial lakes: one main lake directly opposite the building also completing the circle of the building, and a further four 'ecology' lakes. Together they contain about 50,000 mÂ³ of water. This water is pumped through a series of heat exchangers to cool the building and to dissipate the heat produced by the wind tunnels. The main working space of the building is split into 18 metre wide sections known as 'fingers' that are separated by six metre wide corridors known as 'streets' brings daylight into the heart of the structure. Other facilities at the technology centre include a 700 seat restaurant, juice & coffee bars, swimming pool, a fitness centre and an underground Visitor and Learning Centre.

The two-storey Visitor Centre designed to make a minimal impression on the surrounding landscape and adding to the ecological theme of the centre. 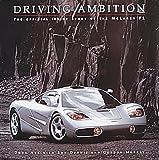 Driving Ambition: The Official Inside Story of the McLaren F1
Buy Now

Are you a Mclaren or Williams fan?