About Steve Jobs - His Early Years and Education

Growing up in San Francisco, Steve job was a curious and strong-willed child, a challenging one to rear. Curious of electrical socket, he inserted a hair pin into an electrical socket, burned his hand and ended up in emergency room. He swallowed ant poison, sending him another trip to the hospital to have his stomach pumped and cleansed. To keep him busy (and stayed out of troubles), his parents bought him rocking horse, a record player and to some Little Richard records. He was such a difficult toddler that his mother once confided that she wondered if she had made a mistake adopting him.

Then, when he was five years old, his father moved to Palo Alto to work in a finance company collecting bad debt. In his free time, he fixed up used cars and sold them for a profit, to save some money for Steve’s future college education. As his father worked on the used car, he would show Steve how to take things apart and put things back together. His father’s careful craftsmanship and commitment to the finest details gave Steve a deep impression. He stressed the importance of doing things right. He told Steve, “When you’re a carpenter making a beautiful chest of drawers, you’re not going to use a piece of plywood on the back, even though it faces the wall and nobody will ever see it. You’ll know it’s there, so you’re going to use a beautiful piece of wood on the back.” That was a lesson Jobs would apply insistently to all new Apple products. He said, “To sleep well at night, the quality of the product has to be carried all the way through.”

Steve never liked school. He found school so dull and dreadful that he and his buddy were troublemakers, causing havoc that got them sent home from school. To scare his teacher, he let a snake loose in the classroom and created a small explosion under her chair. Later, he was lucky enough to be rescued by his fourth grade teacher, Imogene Hill, who moved him to the right path. Jobs’ family was having financial problem at that time. She offered Jobs a great bargain: if he could finish a Math workbook on his own and get at least 80% right, she would give him five dollars and a giant lollipop. He took the challenge. His admiration and respect for Mrs. Hill then grew so great that he didn’t need any bribes anymore to do well in his studies. Jobs called her “one of the saints in my life”. He was a bright student, who tested and scored so high that school officials recommended he skip a few grades. His parents agreed to let him skip just one. However, despite an excellent reader, he has great difficulty motivating himself or seeing the purpose of studying.

When he was in seventh grade, he was bullied in school. He was so miserable that his parents decided to move to Los Altos. There, he found other boys who shared his interest, and their friendship eventually changed his life.

Since he was in grade school, his father brought him electronic gadgets to feed his growing passion in field of electronics. Steve also found mentors in his old neighbourhood, and friends who shared the same interests. A Hewlett-Packard Company engineer named Larry Lang, intrigued Jobs with an old-fashioned carbon microphone set up in his driveway that didn’t need an electronic amplifier. Lang introduced the boy to Heathkits, a conglomeration of electronic parts and detailed instructions that let hobbyists build radio and other gadgets. Steve was intrigued by how to put things together; the kits helped him to explore, learn and understand how things worked and gave him tremendous level of self-confidence in what he could build. He could look at a television set and said, “I haven’t built one of those, but I could”.

An example of Heathkit model (a Radio) can be viewed from this website :

The garage where Jobs and Wozniak made the first Apple computer

During his junior year, Steve Jobs was introduced to Steve Wozniak by his friend Bill Fernandez. Bill was helping Wozniak building a small computer in Wozniak’s garage. They called it Cream Soda Computer since they consumed so many bottles of cream soda while building it. Composed of spare parts they scrounged up, the computer had only enough memory to hold 256 typed characters or about a sentence. Still it could run a program.

Wozniak, who was five years older than Jobs and four years ahead of him in school, had been a star student in school. While Jobs and Fernandez were deeply interested in electronics, Wozniak was obsessed with it. He would collect manuals that explained how minicomputers were made. For fun, he then tried to sketch out designs that would allow them to build with fewer parts.

Despite the age difference, Jobs and Wozniak clicked from the start. Jobs admired Wozniak who knows more about electronics than him, felt that his maturity and Wozniak’s immaturity just about matched. They began hanging out together. 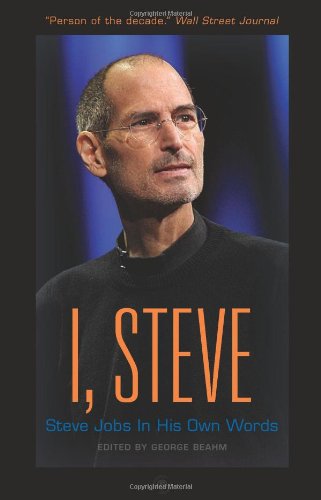 I, Steve: Steve Jobs In His Own Words (In Their Own Words)
Buy Now

Who Was Steve Jobs?
Buy Now

Steve Jobs and His College Years

When Steve was born, his biological mother, Joanne Schieble, agreed to let Clara and Paul Jobs adopt him on condition that they promised her to send Steve to college. Clara and Paul took their promise seriously and they saved money over the years, though not much with the little income they got. Steve didn’t see it that way. He was not interested in the many campuses in his area, though he could easily get a scholarship there. He thought that those universities were too staid for him and they are more suitable for those who know what they want to do in their lives.

After visiting a friend in Reed College, a small, private, liberal arts school in Portland, Oregon, he decided this was the only college he wanted to go. If he couldn’t go there, he didn’t want to go anywhere. His parents gave in, even though they could not afford to pay.

To Steve’s disappointment, Reed had demanding academic standards and required its freshman to go through a serious reading list in the first semester. When Wozniak came to visit, he complained bitterly, “They are making me take all these courses.”

Steve would have nothing of it. He signed up for a dance class, mostly to meet girls. He pursued his own reading list of books about Zen Buddhism, spirituality, and consciousness-raising. He practiced meditation and read a book called Diet for a Small Planet. He became committed vegetarian. He took psychedelic drug called LSD. He said, “There was constant flow of intellectual questioning about the truth of life.”

Steve’s grades weren’t good. Jobs’ parents were not happy that they were paying all that tuition for his son to enjoy a hippie lifestyle. At the end of his first semester, he decided to drop out of Reed.

Despite sleeping on the floor of friends’ room, collecting soft drink bottles for the nickel deposit to buy food, he enjoyed the freewheeling college time. He was free to explore whatever he found intriguing, and to his surprise, some of it paid off many years later.

Among other things, he dropped into a calligraphy class where he was exposed to elegant hand lettering. The class taught him about various fonts – serif and san serif type, and how they are spaced.

He was not clear of his mission in the future at that time, but he was waiting for the right crusade. Whatever it was, he needed to prove himself to the world.