The Chicken Whisperer's Home, Alpharetta GA - The Best Place to Move in America

Alpharetta, Georgia is at the top of the list of the 25 Best Places to Move in America, as determined by analysts at Forbes.com in 2009 and is still a Best City. Good evidence is that most of its residents - 70% - have moved to Alpharetta from either out of state or out of the country.

Just slightly over 20 miles south of Atlanta, greater Alpharetta in Fulton County houses a total of over 65,000 residents - almost double what it was in the 2000 US Census. In June 2009, the Unemployment Rate of 7,4% was over 2 points below the national average, and positive job growth was evident in Alpharetta.

What brings people to Alpharetta?

A major commercial industry helped to grow Alpharetta, the Number 1 Place to Move, quickly - The North Point Mall,followed by the rise of technologies. At Number 18 in this Forbes.com list, Dublin, Ohio exploded in business and population much the same way, all centered around Muirfield Village Golf Club and it's surrounding community of upscale housing, which led to additional new businesses. 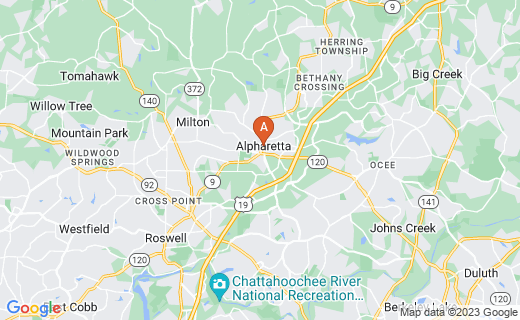 Sacred Harp Singers typically sit in a hollow square forming one of four voice parts on each side of the square, with the singers facing inwards so they can see and hear each other as they sing the powerful old songs that shape note singing.

The Chicken Whisperer's Guide to Keeping Chickens: Everything You Need to Know . . . and Didn't Know You Needed to Know About Backyard and Urban Chickens
Buy Now

The beginning of Alpharetta is traced back to the forced resettlement of the Cherokee Nation circa 1830. After the Native Americans were removed from their homelands by the US Federal Government, the promise of “free land” to new settlers was overwhelming. These settlers won parcels of land in local lotteries.

A Methodist Campground was formed on the site of what is now Alpharetta in order to hold church camp meetings next to a naturally occurring spring. This was a traditional annual happening in the 1830s, offering a church revival, connected activities, social events, and increase in business for local proprietors. Some churches today still hold camp meetings, though perhaps not for as long a duration as the old events.

Population, farming, and other businesses increased to the point that Alpharetta became a town at the end of 1858, supported by a large menu of taxes. The city was damaged by fires during the Civil War, but Alpharetta was not supported by the plantation and slave system, so their reconstruction after the war was less time consuming and the economy bounced back more quickly than in other parts of Georgia.

During The Great Depression, Alpharetta and surrounding Milton County merged with Fulton County to reduce government costs, highways were built though the new county, and Alpharetta continued to expand and develop throughout the 20th Century. The North Point Mall was the boost in 1993 that created the most economic ramifications into the 21st Century, resulting in the overwhelming growth created in the metro area today.

The Alpharetta Metro Area offers many openings in Accounting, Sales, Healthcare, with a number of Post-Doc Fellowships.

Tourism is a significant source of income for Alpharetta, owing to historical installations around the area, Civil War significance, Native American history, North Point Mall, over 100 restaurnats, and heavy daily traffic in and out of the city (only about 20 miles from Atlanta).

Most job listings are occurring for:

Additional large numbers of these employees are in demand:

Occupations Projected to Offer the Most Openings to 2016

State labor officials forecast the following occupations to provide the highest numbers of job opening in and around Alpharetta and Atlanta to 2016: