Rocklin is a northeast suburb of the California State Capital, Sacramento, joining the suburbs of Roseville, Rancho Cordoba, and Folsom as leaders in business, jobs, and residential growth. Rocklin is Number 65 on the Money.com list of 100 Best Place to Live in America. Despite state government hiring freezes around the state, government jobs are still available as well as positions in the private sector among 23,000 vacancies found at the end of October 2010.

It is interesting and ironic that having been founded around the time of the 1849 California Gold Rush that included Rocklin's Secret Ravine operation, the city became a center for granite quarries (a total of 30+ quarries shortly after the Civil War ended). There was more money is rock than precious metal. Rocklin Granite is famous the world over for its high quality, but the last quarry in town closed in 2004, according to the city web site. The granite excavated and placed into government buildings and other structures around the state, nation, and internationally, will likely last many centuries in its strength and beautiful high polish. Of course, other industries arose as granite extraction declined.

The American railroad system came through Rocklin in 1864 and many Irish people gathered to work on the rail line as well as in the quarries. The railroad allowed Rocklin to export its granite more quickly, grow its community, and accept a larger number of incoming residents more efficiently. In 1870, Chinese and Finnish immigrants arrived and in the early 1900s, the Japanese and the Spanish first joined the town, so the culture became multicultural before the 20th Century.. 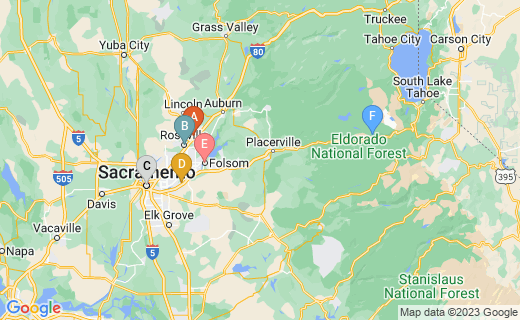 The Rocklin Coin Shop is a local business that still deals in gold (and silver) with a web presence at http://rocklincoinshop.net/. They may not deal in gold nuggets today, but they do work with gold bullion and foreign coins. They're on 4870 Granite Drive, a street that commemorate's the city's granite quarries.

Today's job market for Rocklin and surrounding areas emphasizes the need for Management professionals in many fields, Healthcare professionals, Analysts of several types, and Retail Sales and Service professionals.

This is a nearly-600,000 square foot regional installation that provides retail shopping, upscale restaurants, a hotel, and a number of professional services. Its planners feel that it is located in an "explosive growth area" along a major freeway that draws a large shopping population form three counties locally and from visitors and travelers nationally and internationally.

Interesting for a population that requires a number of different services, the center offers a retailer called Dream Dinners, where a customer can go to assemble compelete dinners to take home and freeze for future use. At the other end of this food spectrum is Jenny Craig weight loss center. Another entire retail store dedicates itself to solving back and neck pain problems. A sports themed barber shop is very popular. Additional stores are planned for addition as construction continues even further. A dentist, a day spa, and a pet supply warehouse are already succeeding at this mall. FedEx Kinko's is even located in the town center. There seems to be everything here. Visit online at http://www.blueoakstowncenter.com/ 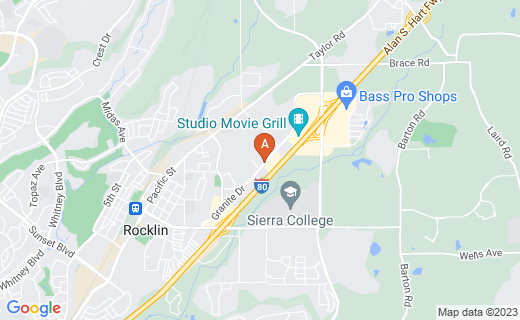 In learning about Toy Row in the largely upscale Rocklin, I was expecting a National Historic District. However, Toy Row is another popular shopping district, located on the commemorative Granite Drive (parallel to Interstate 80). it is a retail business district selling big "toys."

Granite Drive runs SW to NE from Rocklin Road to Sierra College Road, where you'll find a Carl Jr.'s and 7-11. You'll find Pottery World and Camping World along the way.

Approximately 29,000 job openings are found for Rocklin in February 2013, up from 23,000 jobs at the end of October 2010. SALES jobs of all types had already increased 397% in the Rocklin area during the 18 months from February 2009 to October 2010 as one of the fastest-growing job sectors. MANAGER positions increased 532% during the same time period. Both are still increasing. The Engineering Industry has grown even faster, with over 3,000 jobs in those fields alone.

Large clusters of these advertised jobs are located in Sacramento, Roseville, Rancho Cordova, and Folsom CA, as well as in Rocklin.

The Retail Industry is also part of the Travel and Tourism that draws new travelers, vacationers, workers, and businesses to Rocklin and Sacramento. Special events add to that with these annual happenings and many more: