Best Cities for Jobs in the USA

Billings, Montana ranks as Number Twelve (12) among the Top 30 Cities for Jobs in the US. It was names as #12 in the late fall of 2008 by CareerBuilder.com in a project that chose growing cities in the US through hundreds of nominations during the year.

Billings is the County Seat of Yellowstone County, in which the Native American population makes up a larger portion (about 4% of total population) that that of most of the other US States.

Not In Our Town! - The Defeat of Hate Crimes

Another difference in Billings is the set of events that led to the making of the PBS documentary entitled Not In Our Town. In 1993, the people of billings decided to stand up and stand against hate crimes in Billings and to prevent them from recurring.

KKK fliers had been distributed throughout the city on Martin Luther King Jr.'s birthday, the Jewish cemetery was vandalized, the home of a Native American family was painted with swastikas, and a brick flew through the bedroom window of a six-year-old boy because he had a Menorah for Hanukkah set up there. The people of Billings said, "No more!"

Faith based groups from all denominations marched and held candlelight vigils. The labor council passed a resolution against racism, anti-Semitism. and homophobia. When Neo-nazis came into a black church's service and threatened the congregants,citizens of various races were in attendance at that church during the very next service and from then on, more integration was seen throughout town - as a conscious choice.

A local Painters Union painted over all the racist graffiti that had spread so quickly. The newspaper printed full-page Menorahs that were then posted 10,000 businesses and residences in Billings. They were everywhere.

The City of Billings conquered hate crimes in 1993 and went on to revitalize its inner city areas and to make equal opportunities for living spaces, new businesses, and jobs to everyone. The largest city in a 500-mile radius, Billings is the Medical, Financial, Transportation, and Trade center of a surrounding four-state area.

Billings began as a stage coach stop in the American West around the middle of the 19th century. However, Crow Nation people have lived hear for hundreds of years. Native Pictograph Cave State Park contains painted rocks from 5,000 years ago. 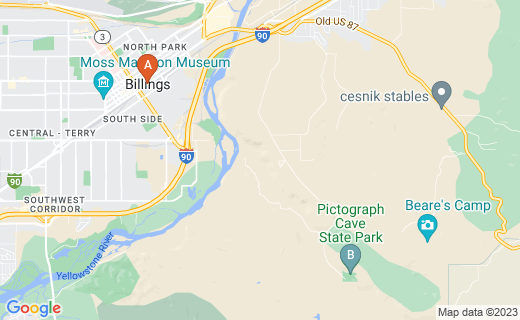 Native Americans - especially Crow Nation - lived without contact with Europeans in Montana until about 1680, when Spaniards introduced the horse back into North America. An ancestor of horses had become extinct some time previous to this, but Native Americans saw the horse as very useful and trained them for their purposes, largely transportation. Then in 1720, these Indigenous People acquired guns.

In 1803, what is Montana today went to the US in the Louisiana Purchase and lewis and Clark set out to explore the territory. Military forts, fur trading posts, and commerce followed, with agriculture and sheep ranching being important to the economy. Steamboats became a usual mode of transport and a gold rush hit part of Montana in 1862. Cattle ranching became strong in 1870 and Yellow Stone National Park was announced in 1872. Later, copper was discovered in the state and the railroads became important in freight shipment and travel.

In 1877 a particular trading post and stage coach station were built near Alkali Creek and the railroads survey the land about 5 years later in 1882. This was the Northern Pacific Railroad, whose officers named the new town they established there after Mr. Frederick Billings, the previous president of the rail company.

As early as 1890, Montana had opened its first hydroelectric plant at Great Falls and in the 21st century, alternative energy is becoming a major source of contribution to the local economy of Billings and the state. However, as late as 1925, Montana was still creating new counties. Mining became a big industry and an Oil Boom hit Montana in 1951.

By the end of 1993, the residents of Billings had stood against hate crimes to build a safer community for progress. The same year, Robert Redford's movie A River Runs Through It filled in the state did well at the box office and brought a large influx of tourism dollars as well as permanent immigration into a growing Montana. The Montana Business Incubator, helping to start an dgrow business statewide,is located in Billings and online at sbdc.mt.gov/.

The downtown area of billings offers safety and business incentives for growth. This urban area enjoys it own Certified Crime Prevention Business Program that is Keeping crime rates low. Much like Neighborhood Watch across America, Downtown Billings established a successful Business Watch.

Over 100 retail, service, and professional services businesses thrive in Downtown Billings, including a range of dining establishments.

Approximately 14,000 people live in the Downtown Area, and over 7,000 people work there. Another 4,000 residents work in the and university and medical campuses north of Downtown. Most workers in and around Downtown are between the ages fo 30-50 years old.