Despite the fact that Detroit, Michigan filed for Chapter 9 Bankruptcy protection during July 2013, the city was still home to economically successful individuals. This includes workers hired during new jobs creation in the automotive industry in 2012 - 2013, as well as other

Another successful group is one of writers, actors, singers, musicians and other artists hired to work with director/producer Sean H. Robertson in various web movie and television projects.The arts are particularly supported by public art installations through the Heidelberg Project. Kickstarter, Indiegogo, and similar crowd-funding sources are making these types of jobs possible to qualified Detroiters who choose to stay in the city and work with Sean. Aretha Franklin herself chose to stay and she is their example.

Sean worked in local television, films, and commercials, including TV's Detroit 187, which unfortunately was cancelled after only one season 2010 to 2011 (imdb.com/title/tt1578258/‎). At that time, the story of a police division in Detroit played despite the fact that the city no longer even had a crime lab, because of the expense.

The State of Michigan revoked its film credits program at the beginning of the decade, and Sean went the routes of crowd-funding, very successfully. His web series is Great Lake State and was televised on the Internet beginning in 2013.

Still, Detroit lost additional residents in the 2010s and many US taxpayers do not want to see the city bailed out with federal funds. In fact, some opinions incllude speculation that the city fathers filed for bankruptcy in order to avoid paying pensions to increasing numbers of retirees every month, according to radio broadcasts on my local 610WTVN-AM and WCBE-FM radio programs.

Detroit Comeback In the 1990s

A major automaker city in the world in the 1950s - 1960s, the place was nicknamed Motor Town and Motown. Decline came soon afterward. Detroit was devastated by racially and politically charged riots in the latter 1960s. Nearly half of the population moved away and more followed later. The 1970s were rumored to be full of corrupt government.

Some of the media blame economic decline on unions for pricing American cars out of the market, but some news reporters blame the Democratic Party for all the city's problems from 1950 to 2013 - probably an unfair accusation.

Detroit is huge. At 140 square miles, it's big enough to swallow Boston, San Francisco and Manhattan and still have 20 square miles to spare.

The 1990s under President Bill Clinton became the decade of Empowerment Zones (EZs) in urban areas of American cities. Federal funds were supplied to subsidize Employment & Training programs and to incentivize businesses to move into and expand within these EZs while creating paid internships for local residents.

In Ohio's capitol, Columbus, we placed thousands of laid off workers, displaced homemakers, and Welfare to Work (W2W) participants into training programs, community colleges, and apprenticeships in order to provide people with jobs and the EZ with workers. I'd say the program worked about halfway here and in Detroit; and was more successful in Chicago. Transportation was a problem in Ohio, where only bus passes were given on an insufficient bus network; but, Chicago programs helped people to obtain working automobiles.

The 1990s were also the time of the successful No Excuses program in Detroit city schools. It worked much more effectively than the following era's testing-driven No Child Left Behind. In No Excuses, teachers and principles that no longer cared about education or students were removed from the school system, despite tenure.

There were sadly some teachers and administrators that were only biding their time until retirement by doing as little as possible and achieving little, while teachers who did perform ell were running themselves into the ground with work.Then, No Child Left Behind replaced No excuses and education began to decline, probably in many US States besides Michigan. Poor education creates some workers that are left without basic skills and unemployable.

According to city and Wayne County statistics and to USA Today, Dettroit supported about 1.9 million residents in 1950 and held 5th spot in largest populations among cities in the USA. In 2012, Detroit was reduced to approimately 701,000 residents, scoring 18th place among cities in America. Population declined in Motor City throughout the 1990s and early 2010s, especially during the Great Recession of 2008 - 2010.

Note: Ford Motor Company did not accept a federal bailout.

In 1950, Detroit had a a population of twice that of my local Franklin County, Ohio in 2012. In 2010, Detroit was reduced to just below the population size of Columbus, Ohio.

Detroit Mayor Archer helped to attract new investment monies into Detroit during his two terms ending in 2002. He also encouraged modernization - the city offices still had rotary telephones in 1994. USA Today reports that under Mayor Archer, the city received upgrades from bond-ratings agencies, more than one per year, a phenomenon which was almost unheard of. What happened after 2002?

Mayor Kwame Kilpatrick amassed a burden of legal problems and resigned in 2008. In 2013, he collected an additional two dozen felony convictions.

The media consensus seems to be that during the decade following Archer, the city continued to borrow fund, even though no costs were apparently cut. Some businesses and a lot of people moved out.

By 2013, city fathers felt bankruptcy was unavoidable. At the same time, at least one fderal judge found the attempt at bankruptcy to violate the Michigan State Constitution. All the while, the city owed money to at least 100,000 creditors.

"Pension debt alone now makes up half of Detroit's $18 billion shortfall. Trying to make good on old obligations while providing a high level of services to a shrinking population ultimately proved unmanageable."

Ford Motors has brought some new jobs to the Detroit area, but other businesses moved away. Sean Robertson is successful, even without film incentives, EZs, and other business incentives, but how long can that last?

Some media suggest that Detroit's government has been a corrupt one ever since the 1970s, not creating a good situation in which to make new jobs. The pension fund problem listed above may be a reflection of funding mismanagement.

A company called Z World Detroit proposes to build a theme park of sorts in some of Detroit's abandoned neighborhoods. The fan craze around zombies and the Zombie Apacolypse is growing in the 2010s.

A psychology course at The Ohio State University taught in the Spring 2013 semester that Americans in their teens and 20s believe that zombies are real and the Apocalypse is coming soon. I think it is a fan craze that provides eople a lot of fun.

Whatever it is, Z World Detroit thinks it can be profitable. However, their Indiegogo crowd-funding project failed to raise more than $9,400.The company still believes in its "spectacular zombie themed experience park" concept, basing its hope on the Heidelberg Project (www.heidelberg.org), in which an artist turned an abandoned east-side street into a major art installation.

Other company startups and projects on Indiegogo are funded for Detroit and will create new jobs. These projects include:

In order to restore more of Detroit's former economic strength, large businesses, small business startups, and families need to move into Detroit, likely with the encouragement of tax and mortgage incentives.

In July 2013, over 85,000 job vacancies were listed for the city, without enough trained individuals to fill them. Many of these jobs involve professions in heathcare, engineering, and technologies. During July 2018, over 50,000 job listings appeared daily, a drop from 2013, as a result of workers moving into the city.

Jobs in high demand come from these companies:

Detroit Lions Announce Agreement With Big Ten For Bowl Game at Ford Field in 2014 - 2019: The Detroit Lions announced that they have entered into a six-year partnership with the Big Ten Conference for a bowl game that will be played at Ford Field beginning in 2014. (www.bigten.org/sports/m-footbl/spec-rel/071713aaa.html Archived. Retrieved September 13, 2013).

How To Make Detroit An Economic Tiger Again - Forbes: The Detroit Tigers may well win the World Series, after having one of the worst records in MLB history ten years ago. Detroit itself can do the economic equivalent.

This project has already refurbished a neighborhood and constructed a 2.5 acre park and recreation area. Reconstruction is set for completion in 2019, but currently includes rehabbed homes, a basketball court, public art, and other activity/green spaces.

The city's magnificent arts museum and the long-time Heidelberg Arts Project operate just a few of blocks away to round out an entire cultural center in this part of city. 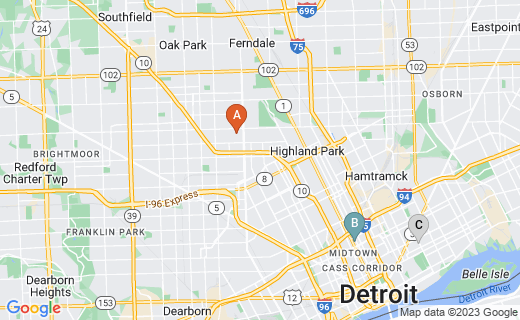