Email Behavior in the Workplace

Carola is an entrepreneur and free-lance writer. She has worked in the business world as administrative support for many years.

Email provides an instant way to share information and answer questions, but the system only works as well as the people who send and receive them. After sending out emails, we may wonder: Will they respond within the hour? Why is their response so short? When does the conversation end?

A research study by the University of California reveals that 90 percent of people respond to email that they perceive as requiring a response within a day or two. Most respondents often reply within two minutes, and half respond in under an hour. There are no significant differences in response times between men in women, though women may reply four minutes later than men.

There are a number of factors that affect how people handle their messages.

Age: The age of respondent can indicate their response time, with younger people replying faster but writing shorter replies than their older counterparts.

Younger users are better able to cope with an increased inbox than older users. When younger users feel overloaded, they tend to send shorter and faster responses. Older users respond to an enlarged inbox by only replying to a small number of emails.

Platform used: Respondents may take nearly twice as long to reply on a laptop than if they were using a cell phone.

Timing: Timing is another factor affecting message response times because people are more active online during the day than at night. People are more likely to open their emails on their smartphones during morning commutes between 6:00 and 8:00 am.

Productivity in reading and answering emails tends to peak around 10:00, then employees take a lunch break between 11:00 am and 2:00 pm, and then activity dwindles between 3:00 and 4:00 pm.

People who receive a curt email response may wonder if the brevity was due to something they said or did. In actuality, the most email replies are only five words. Half of replies are less than 43 words, and less than 30 percent of responses are more than 100 words. When inboxes fill up, users will answer a decreasing number of emails.

Eventually, an email thread will fizzle out. When messages are first sent, the responses tend to mimic the length of the originals. As the conversation goes on, the synchronicity starts to drop off in the middle of the communication. A respondent may indicate that the conversation is over by taking a long time to send a final response. 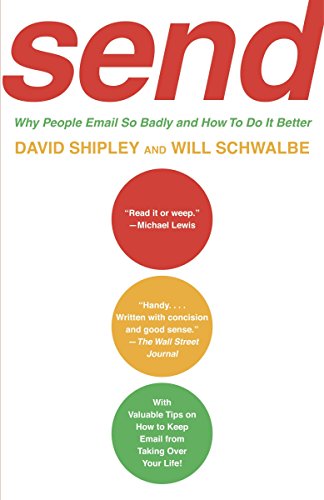 SEND: Why People Email So Badly and How to Do It Better
Buy Now

There are so many outlets by which employees can unintentionally be indiscreet such as talking via instant message, commenting on blogs and message boards, as well as email. Companies are concerned about security issues because they can be fined or sued, and reputations that companies took decades to build may be destroyed when confidentiality is breached.

Companies can develop email policies to ensure that employees are discreet about company activities. For example, a company can have a policy in place that employees can only send business information to people who need it to conduct business with the company. A team including human resources personnel, the CEO, a top IT executive, lawyers, and an outside expert can determine what the policy will be.

Workers should read a copy of the policy and sign it about once a year. A written policy on how employees should use electronic communication tools and the type of information can and cannot be shared can help employees to focus on their jobs when using company technology. Some workers may make honest mistakes or show poor judgement in spite of the best policies, but having to read and sign the document should encourage workers to think more carefully and about they are saying or sending.

A study by the British Psychological Society reveals that how we handle our emails can cause stress, and frustration. People who checked their email early in the morning and late at night and higher levels of stress and pressure. Researchers recommended putting away phones and encouraged people to consider turning off the notifications app or email app for part of the day to take control of when they receive email.

Understanding email behavior among business people can help us to predict how long it will take the respondent to reply, the length of their response, and when the messages will end. Clear policies can also minimize the possibility of breaches in business etiquette and the leaking of confidential information.