Northern Virginia is one of the Top 25 Best Large Cities for jobs and business in America according to experts at economic firms like Forbes and CNNMoney. However, it is not a city.

Confusion exists about cites, metropolitan areas, metroplexes, and official Metropolitan Statistical Areas (MSAs) use for government labor statistics. This is all part of workforce terminology.

By federal definition, Northern Virginia is currently a Metropolitan Statistical Area or MSA that acts like a large city. It includes the counties of Arlington and Fairfax, with the addition of a few independent cities that are not part of any county.

This region is is also a part of the larger Washington DC area labor statistics unit. Northern Virginia is in the Commonwealth of Virginia and is a group of counties in the northern part of the state. It thereby contains many major cities and metropolitan areas.

A metropolitan area, or metro, is often called "The Greater ______ (city name) Area" and includes much of a county or parts of several counties or several whole counties.The metro area can be quite large!

All of these units can be confusing, but are valuable for labor statistics tracking and especially for state and federal forecasting of the Top 10 Jobs of an MSA, decade by decade.

NOVA is home to almost 1/3 of Virginia's total residents.

The Commonwealth of Virginia is divided into MSAs that contain workforce and business statistics used in tracking occupational and industrial trends in the state and its cities. Since the advent of the Workforce Investment Act, we also call some of these areas "WIA regions."

Northern Virginia contains several counties and is a part of the larger Combined Metropolitan Statistical Area (CMSA) of "Washington DC - Baltimore - Virginia." This CMSA was redefined as larger area after considering the significantly increased populations found here in the 2000 US Census ("Census2000"). Eight out of the Top 10 Cities for Living recommended by the website NerdWallet are all in Northern Virginia.

These cities are close to hundreds of tourist attractions that are recreational and historically educational, and are near to government jobs and facilities in Washington, DC. These facilities include at least three major federal intelligence agencies, the Pentagon, NASA Commercial Crew companies, military bases, and huge regional shopping malls like Pentagon City and Tyson's Corners (successful since 1968). 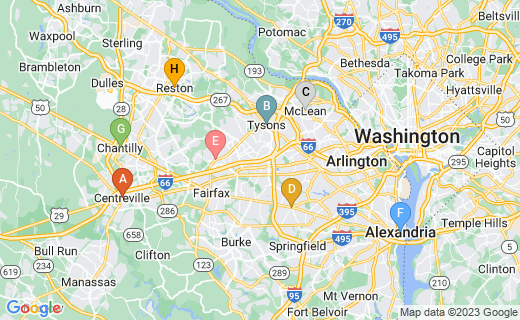 Information comes from the author's consolidation of data from the Chambers of Commerce of major NOVA cities, along with state and federal estimates.

Washington DC Area wages/salaries and benefits rose to surpass that of the average American between 2014 and 2016 under the Obama Administration years (Please see charts below.).

Notice that most of these companies are part of the NASA Commercial Crew and involved in aviation, aerospace, and national defense activities.

Information was gathered from associates in the Active USAF Civil Air Patrol and NASA.

Careers in Tourism and Travel

The Commonwealth of Virginia is one of the original Thirteen Colonies and The New Nation, first settled in the mid-1600s.

The commonwealth is the locale of some of the country's oldest schools and churches as well as national Revolutionary War and Civil War historical sites. Virginia is near to the nation's capital, Washington DC, and not far from New York City and its sights and sounds. Tourism and its sister industry, hospitality, are healthy contributors to the economy of Northern Virginia. Specifically, the following cities provide both seasonal and rewarding long term employment to large numbers of workers every year.

Over 80,000 workers are employed yearly in this industry sector in NOVA.

Tourist Dollars per county in Northern Virginia is increasing:

Careers in Health and Medical

Healthcare is an industry that is robust and growing in Northern Virginia and wil continue to growth for a full century.

Since the Millennial Generation born between roughly 1980 to 2000 is nearly as large as the Baby Boomer Generation, healthcare jobs will increase through at least 2100, considering longer life spans.

Our 2000 AD babies will be 80 years old at that time and Healthcare will still be important.

Information Technology (IT) is noticeably successful in Northern Virginia as well. The substantial numbers of healthcare facilities, insurers, schools, post-secondary institutions, and government employers and contractors, as well as other employers, provide many openings in the computer programming, systems, and data analysis realms. For example:

The Manahoac Nation is originally from Northern Virgina and some descendants live there today. The tribal name means "They are very merry."

The tribal nation includes six subdivisions in Northern Virginia and all are related to the Sioux Nation. They conduct successful businesses and hire non-tribal people as well as members of their nation.

Monacan Nation is related to the Manahoacs. Their name means "digging stick." They and the Nahyssan are also related to the Sioux. The Local Native Americans contribute to the Travel and Tourism Industry, as well as owning some other businesses,

Colleges, Universities, Vocational Schools, Career Colleges and Apprenticeship Programs are offered at the following list of high quality institutions in the region:

Not only does the variety and range of participant and spectator sports offer fine recreation, exercise, and entertainment, but also employment options and career potential.

Many of the following organizations and clubs offer job listings on their websites. In addition to direct jobs, these entities link with Tourism and Hospitality around the institutions and venues associate with sporting activities.