The Age of the Drones

What is the Work of Drones?

Do you remember a time in which drones were either bees or human workers in dead-end jobs who were waiting for the weekend? New drones do other things.

Today, these devices are unmanned flying machines that deliver goods that include medicines, provide surveillance in war and crime zones, help with humanitarian aid, and aide with Civil Air Patrol search and rescue missions.

These flying machines can track endangered species to provide information on migration patterns that may help animal scientists to save whole wildlife populations. They can also help look for missing people, like wandering senior citizens and even criminals.

Such information collected by drones may lead to development of technologies and husbandry methods of curbing beehive colony collapse and Monarch buttery decline in America and Mexico. Why should we care? The bees and butterflies are pollinators of many plants in the world and without these insects, our food supplies would be drastically limited.

The Ohio State University was chosen in 2015 as one of only 15 universities in America to design and develop new forms of drones and new uses for drone technology.

Ohio had over 1,200 aerospace manufacturing companies in that year and many more now.

The FAA has written new rules for flying drones that weigh less than 55 pounds and this specifically involves flying them in civilian airspace.

I see it as the next frontier in aviation.

This list is not all-inclusive, and other, newer, types of drones are designed freqeuently.

Ohio is the first US State in which companies have used drones for bridge inspections, mapping, and precision agriculture.

Sinclair was chosen for its forward looking programs in engineering technologies and the fact that it is on the Aviation Heritage Trail. the home of flight in America.

Both institutions of higher learning are located in the Ohio Space Corridor, which extends from Cincinnati in the southwest corner of the state, up through the Dayton-Fairborn Market and on towards Columbus, Ohio's Capital.

Many of the private sector's aerospace businesses in this expanding region are part of the NASA Commercial Crew.

Part of the 2012 Drone Act required the FAA to fully integrate unmanned aircraft into the private sector and civilian airspace under the National Airspace System by September 2015. 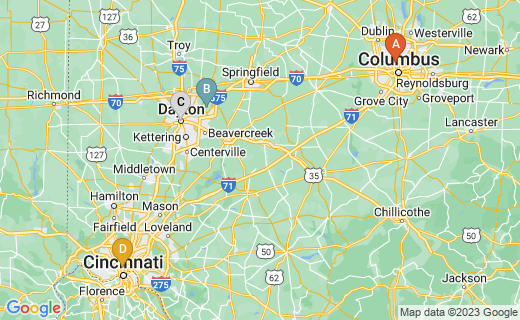 Center of the The Ohio Space Corridor

Aircraft and Aerospace in Ohio

At least 600 job openings related to working with drones or UAVs were posted across the Internet for the United States in April 2015. The highest demand job titles are: