Working and Living in "The OC" - Orange County, California

Economy and People in The OC

Orange County is officially part of the Los Angeles Media Market, since it is just one county southeast of LA. This particular multi-city market is the largest media market in the United States.

The result of the size, reach, and effects of this media market and its advertising and information distribution is a high level of business growth other than in retail sales, along with increasing numbers of jobs in current and emerging occupational fields.

Best Occupations for Jobs in The OC

These occupations include Healthcare and Information Technology. In the 21st century, some workers left retail sales in the first decade to make the transition to other Services, IT, Healthcare, and additional fast-growth jobs, but some turned to fine and casual dining as servers in a rise in jobs since 2003 in the Dining Industry. Wages in the fastest-growing jobs are high overall (see tables below for the Top Jobs).

According to Orange County government records, the median price of a family home in the county as of February 2008 was $520,000.00. With a population well over three million people, nearly two billion Orange County building permits were issued in 2006 alone.

Over 1,000,000 workers live and work in Orange County, while another 200,000 commute out to Los Angeles County. However, 250,000 individuals commute into Orange from three other counties: Los Angeles and San Bernardino/Riverside Counties, the last two making up the Inland Empire. Orange County supports over 1,250,000 jobs with numerous openings.

Emerging Industries that are increasing job postings from 2015 - 2020 include Energy, Environment, Green Technologies, and Biotechnology/Nanotechnology. Transportation is also particularly increasing jobs - especially Truck Driving, which has maintained nearly one million openings during 2015 across the United States.

Road Map of The OC Area 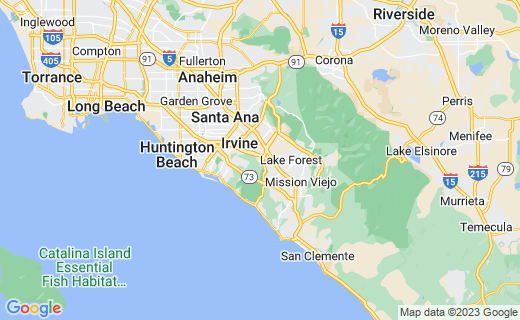 The following list is of fast-growing jobs through 2020, available through public records. Employment opportunities in Orange County exist for many high school and college graduates.

Young and Mid-Career Professionals will find the most opportunities for employment, although Seniors are working longer into the life span and seeking additional work in retirement years. These types of jobs are also available, both part-time and full-time.

Three of the Top 10 jobs are in Information Technology (IT) and provide high salaries and abundant benefits than many other types of jobs. However, the Healthcare Industry offers more job openings than several other industries combined in Orange County, California.

The predicted job-listing leaders are:

NOTE: Most of the occupations on the above list increased job listings in Orange county from 2010 - 2015. Occupations in numbers one through six above most noticeably increased advertised jobs.

BusinessWeek found that Anaheim in Orange County was the fastest growing city in the entire state.

Quite a variety of additional occupations are predicted as fast-growing in Orange County. They include additional IT, Healthcare (including Veterinary), Education, Entertainment, Criminology, and others. Each of these positions requires a high school diploma and some additional training or college and certifications.

This list contains many of the major institutions of higher learning throughout Orange County. In addition, county residents commute short distances into surrounding counties to attend other schools. Higher education is prolific in the region and offers some unique opportunities.

There are several sports teams in The OC and some are becoming very popular, including Roller Derby and Rugby. Job opportunities exist in some of these organizations regularly, as listed on their web sites, including Pro, League, High School, and College sports as well as in the various stadiums and arena that host them. Some arenas also host music concerts and other events.

The Native American population has increased approximately 45% in the southern areas of Orange County since 1980, as well as in a few northeastern cities. Numerous Native American business and social agencies have grown in that time as well.

US Federal documents still refer to Native North Americans residing in the USA as "Indians." However, legal names often include the word Nation rather than Indian. Bands are smaller groups of larger nations or tribes.

Museums In the OC