A City on Many Top 10 Lists

Portsmouth, New Hampshire is among the Top 30 Cities for Jobs in America, even during a recession. This metropolitan area stands at Number 28 on this list for several reasons. One is the proactive advancement of the local economy by the Portsmouth Chamber of Commerce. Another is the The redevelopment of Pease Air Force Base that has created new jobs.

Intent on actively building business in Rockingham County and Portsmouth, the local Chamber of Commerce hosts a radio show called Seacoast Business Connection, a special project of the Chamber's Business Development Committee. It features shows on new businesses in the metro area on WSCA FM 106.1 and online at www.wscafm.org every Monday at 12:00 PM. 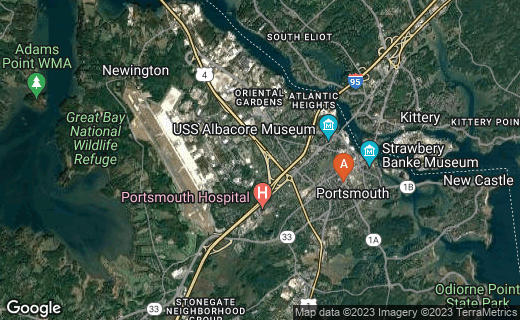 The refurbishing an expansion of Downtown Portsmouth, including the Historic District and several attractions on the US National Historic Registry of Landmarks, has brought increasing economic wealth to the city with a momentum that continues to move forward.

The central city offers successful art galleries, theaters, museums, restaurants and taverns, and international cuisines. Venues and events that attract tourists from around the world include the Music Hall (133 years old in 2018), the Prescott Park Arts Festival that lasts a month in the summer; and the Seacoast Repertory Theatre.

Located on a major waterway at the mouth of the Piscataqua River across from the State of Maine, the city is also a metropolitan hub for several other surrounding towns. These include the larger Rochester and Dover; and the smaller Exeter, Hampton, Greenland, Stratham, and others in New Hampshire; and Kittery, Eliot, South Berwick, and York in Maine. Portsmouth is the major center among these cities for work, trade, and travel.

This area of New England came in a land grant to founding settlers in1622. The Council of Plymouth provided a township grant in 1631 for the acreage that became Portsmouth and the adjoining harbor, along with several additional nearby towns.

Portsmouth (the port's mouth) was originally named Piscataqua, and then Strawberry Banke for its abundant wild strawberries. Portsmouth was later chosen to honor Portsmouth, England and to denote the potentially lucrative port in the harbor at the mouth of an adjacent river.

Portsmouth was chosen capitol of the New Hampshire colony in 1679. because of the good trade and shipping elements of the area, the town continued to grow through the Revolutionary War, and in America, up through most of the 20th Century. In fact, from 1950 - 1960, the population increased by 43%.

The local leading industries for growth potential include:

The Top Three Largest Employers are also among the Top 50 employing the largest numbers of people in the state of New Hampshire.

Portsmouth has been listed by several organization as one of the top cities for walking in the country. In addition to open green space and parks for walking, Portsmouth offers a large waterfront area with its own Prescott Park. This park cultivates flowers in spring and summer and experiments with new varieties that are interesting to view.

A cultural arts festival is held at the park every summer. This includes theatrical productions of such famous works as The Wizard of Oz and other family favorites. In addition to the park, a dozen public beaches can be found along the coastline. Three local brewers offer tours as well. Kayak rentals, lighthouses, maritime museums and reserves round out the year-around activities.

Strawbery Banke Museum: Clean Air-Cool Planet (CA-CP) worked with cities, college campuses, and business corporations to reduce millions of tons of greenhouse gas out of the atmosphere. A grant was awarded to this museum to continue that sort of work in its facilities, offering a number of jobs. In fact, an undergraduate and graduate Climate Fellowhip is available for students to work in this sustainability effort.