From 2010 to 2017, Reno was named by Forbes.com and others as one of the ten best American communities in which to live, start a business, celebrate holidays, and enjoy an emerging green community. By 2018, the city was still ranked among the top 35 out of thousands.

Reno, Nevada was once known as The Divorce Capital of the World, based on the fact that residency for divorce proceedings could be established in a very short time. Reno has also been called Sin City and The Neon Babylon because of the numerous divorces and the popularity of resort hotels and gaming establishments. In the 21st century, all that changed.

The Reno lifestyle is moderation in everything. Four seasons and none of them are too long, too cold or too hot.

The Reno-Sparks Metro, is the official seat of Washoe County, with access to many government jobs.

The city enjoyed 30% employment growth overall in the decade from 1998 - 2008 and continued to grow new jobs through 2018, Nevada is the fastest growing economy in the USA.

This growth boosts local and state economy, joining with the Greater Las Vegas Area's economic health. These two metro statistical areas together provide the bulk of all new businesses and new jobs in the entire state. One hallmark of this growth is the Tahoe Reno Industrial Center, the largest such center in the world. located a few miles to the south of the metro area.

Two metro statistical areas together provide the bulk of all new businesses and new jobs in the entire state: Las Vegas and Reno. 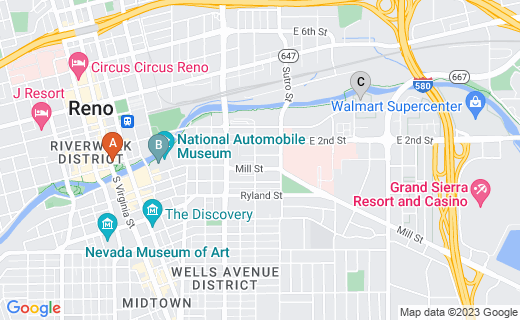 The city of Sparks is a few miles to the east. The Paiute people are divided into three groups, all of which live in Nevada:

Business Development in the Desert

Major General Jesse L. Reno served in the 9th Army Corps during the American Civil War, dying a hero. He had also fought at Bull Run, so the local community named their town after him in 1868.

A 1776 Spanish horse trail near Reno became a wagon trail and then a highway that led to automobiles, trucks, and a toll bridge that began as a log laid across the Truckee River. early on, many rode the trail to Spanish colonies, the California Gold Rush, industries grew with the traffic, and Reno was founded.

The post-Civil War town lived on mining (at least 17 minerals are still extracted locally in the 2010s), brothels, and gambling houses, but the 21st century brought additional revenue from not only entertainment and casinos, but also health, education, and technologies.

The largest area employers include echnologies and healthcare companies:

Employers Advertising the Most Jobs During the Glacial Period of history some 12,000 years ago, ice melt in the mountains eroded the Nevada floor each summer into what are now gullies and riverbeds in areas that attract tourists and school groups.

Early Native Americans here were the Anasazi - the Ancient Ones, still holding fascination for visitors. Pow Wows, native arts, and resort areas make up part of the Native American business enterprise in and around Reno.

Native venues attract many tourists away from some non-tribal resorts, but the owners of those establishments have become consultants sell large numbers of supplies to these tribal businesses.

The Reno-Sparks Indian Colony became a federally recognized tribe in 1934.

A number of faculty and staff positions can be found at the following institutions.

Sports for entertainment, recreation, and even career opportunities are available in the larger Reno area of Nevada at the following organizations.