Business and Life on the US Space Coast

North Beach, Florida is one of the richest places in America designated by Forbes.com in 2010 and US Census 2010 Bureau information. The city - actially an unincorporated community - stands in 9th position, right after the four richest places in New York State. In addition, the Number 10 Richest City actually ties with North Beach for Number 9 (see the list at the end of this Hub).

North Beach has been among the Top 100 Best Places to Raise a Family, according to Sperling reports and Sperling Best Places on the web. In addition, the community supports its own country club and enjoys the view of launches from Cape Canaveral just 45 miles north along Highway 1A.

Even though it is a small residential community with 343 residents reported in 2010, the city increased in population by over 41% since the 2000 census tally, some 240+ people. Median home values in 2010 were over $788,000, so what is drawing new residents to North Beach, Florida?

Orchid Island is a long barrier island that is home to North Beach, Sebastian Inlet State Park, several residential communities and many historical and tourist attractions. 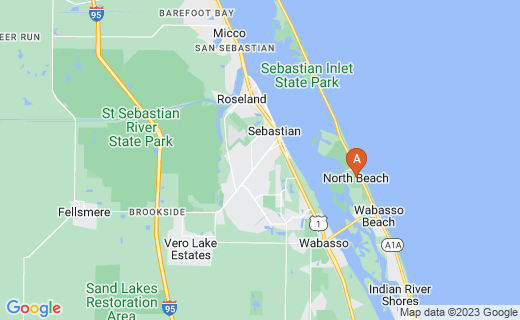 Explosive Growth in the 1960s

When the US Space Program gained impetus and expanded on Cape Canaveral and children watched spaceships taking off from school TVs, additional families and businesses began moving into the Cape Area.

These people and business concerns filled in all the way down the barrier island on the Atlantic Coast of Florida that was separated from the mainland by the Indian River Lagoon and took up most of Brevard County, to become the US Space Coast. It was an awe inspiring time in which the US was determined to land on the Earth's moon before 1970.

The already healthy Travel and Tourism Industry of Florida drew even more visitors with the addition of the chance to see rockets and space capsules lift off at Canaveral (called Cape Kennedy for a time).

At the same time, the 1960s prohibition on travel to Cuba under the Kennedy Administration kept more visitors and vacationers in nearby Florida. The cruise ships no longer set sale for Cuba. The long barrier island on Florida's east coast became a hothouse for growth.

Space Age furniture, décor, and appliance businesses bloomed under the contrails of the Mercury and Apollo Programs, kitschy signage appeared on storefronts and motels, and space-related tours took form.

Vacation opportunities developed that took in the daytime activities of the beach, shopping, and the Cape, and nightlife at kitschy taverns, all woven around Cape Canaveral. Business, residential growth and retirement centers continued to grow from the Cape down the Atlantic Coast at least to Jupiter (aptly named).

The Kennedy Family, NASA, and outer space have made for a cult of memories and hope for the future that linger in the area.

On February 24, 2011 in the afternoon, Mission STS133 began as US Space Shuttle Discovery lift off in its final journey.This was the end of the shuttle program for Discovery, the end to the entire program occurring during July 4th Week in 2011.

After Discovery returned to Earth, it was donated to one of the aerospace museums around America that have bid for its receipt. The shoreline up and down the Space Coast were crowded with massive audiences. Viewers camped out overnight in the Titusville Bridge area north of the Cape to be assured of seeing the launch.

North Beach is located in the Sebastian-Vero Beach Metropolitan Area. Along with access to the jobs listed for this market area and being a good place to raise a family, North Beach/Vero Beach is one of the top-recommended places for retirement by a variety of economic, financial, and retirement magazines in America.

All of the highest demand jobs are involved in:

In late February 2011, over 5,500 job listings were available to the Sebastian - Vero Beach Area. Number of job listings had decreased during the previous several months in this market, but 5,500+ jobs, many well paid, were available.

Companies Hiring the Most Workers

Job listings are available for the following positions with NASA and the NASA Commercial Crew of privately held aerospace companies.

Major Companies in the Space Center That are Hiring: