The City That Popped Up Out of Nowhere

This city was created by real estate developer after the fashion of a "planned city" that he provided for agricultural workers. Its location is the Salt River Valley in Maricopa County. The city offers a self proclaimed top-of-the-line K-12 educational system and well-kept neighborhoods that are always improving. The local mall uses the Surprise! logo.

The founder of Surprise in 1938 was Homer Ludden, a former state legislator. Reports have it that he named it after his hometown in Nebraska, but very little information is available about that village (see block to right).

Not incorporated as a city until 1960, Surprise AZ celebrates its 50th birthday in 2010 -- and Good News for job seekers: Money Magazine has declared Surprise a Top American City for new jobs every year since AD 2000. 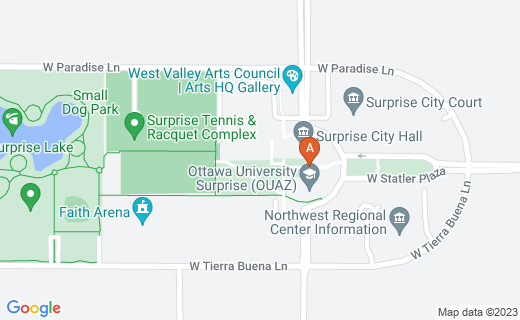 Sun City and Sun City West are planned retirement communities in Surprise that were built by the real estate developer Delbert E. Webb, after whom hospitals and other facilities in the area are named.

Upscale communities, these two add to the success and attractiveness of Surprise as a chief retirement center as well as a business hub. Recreation is a large contributor to this business sector development in the form of numerous local golf courses. Mid-Careerists are drawn to this area as both a place of employment and a ready retirement venue in the future, without moving cross country.

Prasada Mall and Residences, on a scale with Mall of America is under construction near Surprise AZ at this time and will bring jobs and revenue to the city. See the master plan HERE. 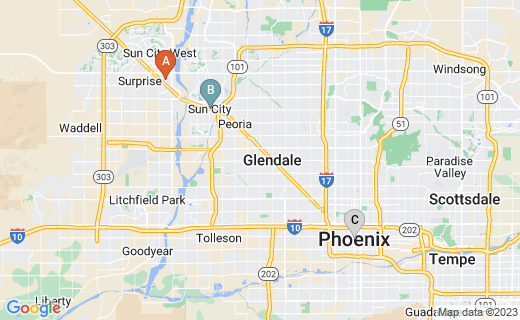 Some researchers feel that planned communities or common interest developments (CIDs), are a hallmark of the fragmentation of American society– the isolationism of age groups, ethnic groups, professional groups or whoever can afford to construct a special interest community.

Sun City and Sun City West are two of these communities, for retirees that enjoy an above-average income in retirement. These communities are described as having restrictive covenants and deed clauses, powerful community associations, and strong citizens groups that press their political influence. At least one of these two is home also to highly politically influential older migrants.

The seniors in these two communities wield power by defeating school funding issues at the polls, controlling the Dysart Schools board, and seeking to de-annex themselves out of the district to avoid paying school taxes. While this may be the case, it is likely not unique to Arizona. However, some sociologists feel that CIDs of this sort are placing neighboring communities at risk for substandard education by defeating al the school levees.

According to the US Census of 2000, 22 males and 22 females lived in the original Surprise. Five were preschoolers and the remainder comprised adults under 65 years of age.

The biggest attraction there is the Big Blue River Bridge that was built in 1898 and is now on the National Register of Historic Places.

A Japanese internment camp during World War II was operated by the US government in nearby Surprise! 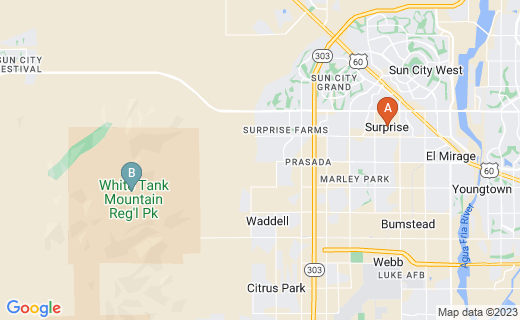 City in the Sun: The Japanese Concentration Camp

Many of these jobs are in Phoenix, just 24 miles away:

Within 25 miles of Surprise, the best additional top job openings include: