I drive people to their destinations as I drive towards my destiny.

Wacker Drive is a street of contrast. Traffic can move north/south on one wing of the street and east/west on the other. Wacker is only about two miles long. Yet, it crosses with at least 15 other streets and is within a block of 18 bridges that span the Chicago River.

Wacker with all its connections rest entirely within the Loop. Whereas some thoroughfares have a frontage road, it has a frontage walk; Riverside Plaza. And, most notably, it’s a multi-level roadway. 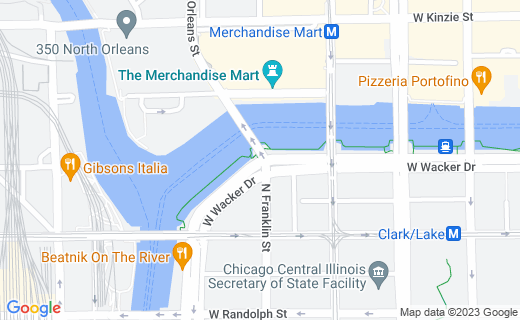 Wacker Drive travels in all four directions as it follows the Chicago River’s course around the Loop. The river route enables it to intersect with both north/south flowing and east/west streaming streets. The Wacker/river nexus makes it among the best streets for traveling to city center locations.

Wacker’s east/west bank host the London House and at least five other fairly frequented high rider housing (apt/condo/hotel) buildings. The same stretch has led me to a glut of voracious volume visited places that are near but not on Wacker Drive that include River North’s Merchandise Mart and Streeterville’s Mag Mile.

Remember, shared rides are rideshares’ version of the bus. Via’s default option and Uber Pool work this way. The clock literally starts when the driver arrives at the pickup spot. Both driver apps actually have a visual of a ticking clock! The driver is free to leave without you when the clock runs out. So, if you’re still on the elevator in the skyscraper that you work in as the driver arrives, you may miss out and still pay something. Be there on time. Happy riding!

Highlight on the Hood- The New East Side

Wacker Drive’s east/west tract between Michigan Ave and Lake Shore Drive forms the north border to the neighborhood within the Loop community, the New East Side. Michigan Ave, Lake Shore Drive, and Randolph Street are its west, east and south borders respectively.

The trendy but tiny area contain 10 residential buildings (apt/condo/hotel) that has provided me with multiple trips. Three among these are Wacker Drive addresses. The ‘east’ also host tall buildings that draw tall traffic. The Prudential Building, Aon and Blue Cross/Blue Shield are the busiest among these.

The upper echelon enclave consist of multi-level streets, ramps, twist and turns that enable it to provide so much in so little space. I was already familiar with the area before my rideshare gig. So this didn't pose a problem. I would advise drivers who haven’t been here to do a dry run. This is a unique place with distinct dimensions. But, it’s well worth learning for what it has to offer.

I learned of sub-street level Chicago during a previous driving life. The city’s main auto pound lies beneath the New East Side’s trendy exterior. I know because city contracted vandals hijacked my car twice. That’s too much headache for a side job.

I soon learned the lower drive provided safe havens for delivery cars in the form of building docks. The docks became my preferred choice to park whenever possible. The same docks enable efficient movement of goods to Wacker’s varied sites by relieving the upper level of congestion. As a result, Lower Wacker helps to speed up Upper Wacker traffic flow.

Lower Wacker Drive is not immune to traffic jams. Still, it typically allows drivers to move faster than the Loop streets above it. Moreover, it provides access to the Eisenhower I-290, Kennedy I-90, DuSable Lake Shore Drive (Rt.41) and other express routes.

I have taken advantage of this quirk’s perks. I’ve often bypassed evening rush hour Loop traffic. This includes trips taking riders to DuSable Lake Shore Drive en route to north side areas, south side destinations, the United Center and more. The Union Station transit depot is the high rider destination the lower drive has helped lead me to the most.

Quirky can be good. However, not all quirks are created equal. The same subterranean vibe that allows short cut and speedy access interferes with cell phone performance.

The map apps are inapt when traveling the lower depths of Chicago Streets. For example, the app has at times directed me to turn onto State Street (among others) while on Lower Wacker drive. However, State Street doesn’t have a lower level. So how would I turn on to it? I don’t. I can’t.

Practice makes perfect. I suggest drivers take a dry run (or two or a dozen) before you carry passengers here. DuSable Lake Shore Drive, Michigan Ave and Columbus Drive also have sub main street levels that drivers should learn. I can’t repeat it enough: the app is not your friend when driving the lower ends.

Wacker is a unique street that uniquely contributes to driving within the city. It does this for all drivers but is especially valuable to rideshare drivers who dare tread into the city’s center. It is eccentric and quirky good.