Best Places to Live In America

CNNMoney Magazine online recognizes Franklin, New Jersey as the #34 Best Place to Live in America out of 100 Best Cities chosen in 2010. Part of the draw to Franklin is that it offers city and rural elements of living, including working farms. All of this is located just about an hour northeast of NYC as well.

One unusual characteristic of Franklin is that the area in and around the city (a Borough, officially) contains at least 260 different minerals, 50 of them flourescent. Many are found nowhere else on Earth. Although all the mineral mines are now closed, one in nearby Ogdensburg was converted into a mining and mineral museum as a historical and tourist attraction.

Franklin was once known as Franklin Furnace, named after Benjamin Franklin, and the mineral Franklinite is found in the area. The town and Borough grew up originally to house miners moving into the area to work in the late 1800s and early 1900s, but agricultural played an important part in the economy as well.

Franklin area farmlands come under a sustainability initiative that is operated by the State of New Jersey.  The Farmland Preservation Program helps by offering grant funding to New Jersey counties, municipalities and nonprofit organizations. Thsi money is to be used to purchase development easements of farmland, to buy  farms and development easements from farm landowners, and to offers money to landowners to cover 50% of the cost of soil and water conservation projects. See the link below:

Bed and Breakfasts - Visit this link.

Franklin NJ Area On the Map 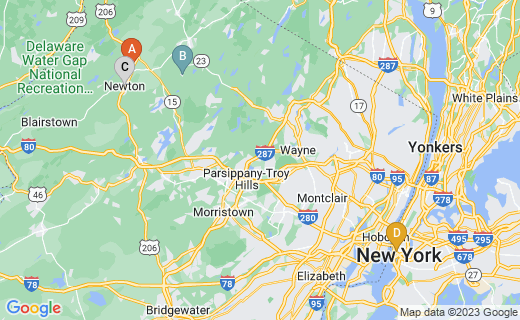 This Is How We Do It: One Day in the Lives of Seven Kids from around the World (Easy Reader Books, Children Around the World Books, Preschool Prep Books)
Buy Now

Sussex County offers some public bus tranporation and Paratransit during daytime work hours M-F throughout a county loop at affordable rates of $0.50 a ride for non-Paratransit riders. The nearest passenger trains and light rail are available in Newark NJ. However, a bus is available between a point 5 miles southeast of the center of Franklin and New York City, taking from 1 to 2 hours transit, depending on the number of tranfers needed and time of day (check Google map and directions).

Franklin NJ enjoys access to 30,700+ jobs in December 2010, largely in the Healthcare Industry, Grocery Industry, and the Information Technology (IT) Industry. Franklin is in Sussex County NJ, which lost a considerable number of jobs during the latest Recession, especially in 2009. However, job listings increased during Spring 2010 and, although they declined in the summer, rose again during 4th Qtr. Part of any 4th Qtr rise in job listings can usually be attributed to seasonal increases in the Retail and Tourism business sectors.

Companies Listing the Most Jobs

Forecast for Fastest Growing Jobs through 2016

Healthcare Occupations and Food Service Jobs are also expected to add large numbers of new job openings to 2016. This is in addition to usual employment turnover figures.