Former U.S. Vice President and continuing climate change awareness promoter Al Gore lives in Belle Meade, within the city limits of southwestern Nashville. This neighborhood was named as the 12th richest place in America by Bloomberg analysts in AD 2010, with a per capita average income of over $333,000. Incomes rose on average 18% from 2000 to 2008 as well. with an average net worth found to be about $1.6 Million.

Sustainability is a dedicated priority of Belle Meade and Nashville, with efforts underway to increase he umber of local residents using public transport and carpools.

I love carpooling lanes in Nashville! Recently, I saw police officers pull over a motorist driving in the carpool lane as the sole occupant of his vehicle. He had to sit and wait until rush hour traffic was entirely over before he was allowed to be on his way! He was also given a fine.

Although very few of the Belle Meade residents use carpooling, carpooling is important on the highways through the Nashville Metro Area. A carpool lane is clearly marked and enforced during morning and evening rush hours. I have witnessed that a single driver in an auto using that lane during these hours is pulled over by law enforcement officers and ticketed. Further, I have heard from local residents that the driver must sit until after rush hour is over before being allowed to resume his trip.

Green spaces, parks, and large gardens are important in this area of the state, reinforced by the precedent that Al Gore's father dedicated the opening of the magnificent set of gardens at nearby Cheekwood in 1960. Sustainability is part of the metro area's ongoing plans for operation and appears in recycling programs and gardening classes at a number of facilities that include Cheekwood. Vanderbilt University is a proponent of sustainability and renewable energy sources. 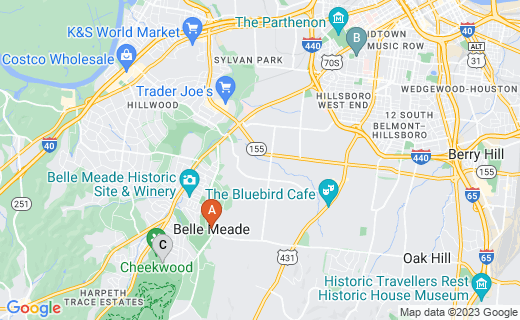 Looking for the definition of Belle Meade namesake sites in Tennessee and expecting to find "beautiful meadow" in French and Old English, I was surprised to find instead, the circus clowns James Belle and Harvey Meade.

These two men founded an all-white country club of the name Belle Meade in 1866. There is some suggestion that they may even have been members, or at least supporters, of the Ku Klux Klan.

These men worked in the middle 1800s for a little-remembered travelling circus called Shrimp and Harvey's, but got a big idea and quit right after the American Civil War. They applied their carny tactics and knowledge to making a large amount of money after the war by selling tonics ("snake oil") from town to town and later, collecting their country club fees. The tonics were largely alcoholic, so putting together their last names, you might get "beautiful honey-based spirits", as in English mead.

Belle Meade certainly has become synonymous with wealthy status these days, as well as with a city, a neighborhood, and at least one street bearing that name.

The Prince of Tennessee

The Prince of Tennessee is a comprehensive documentary type of book about Al Gore that is based on 500 interviews or more.

While his father Al Gore Sr. was an attorney for Big Oil, as well as a law professor at Vanderbilt, Al Gore Jr. has, according to this book, made real changes in his own life and environment for sustainability.

Controversy rages the public media about wheather his Belle Meade Estate is "green" or not, but evidence suggests that it is.

The book is an interesting character study, especially as a part of American History.

Cheekwood Garden opened in May 1960, dedicated by Albert Gore Sr., Senator from Tennessee. It was built on the Cheek Estate and financed from a fortune that arose from the rlated rise of the Maxwell House coffee brand that was developed by a Cheek cousin. The Cheek-Neal Coffee company was purchased by what is now General Mills for $40,000,000 back in 1928.

The 50+ acres of botanical gardens and the mansion that houses an art museum, art gallery, and restaurant have contributed to the culture of Belle Meade and Nashville since their opening to the public by Senator Gore. The complex is located in the inner suburb of Franklin, Tennessee, along Belle Meade Blvd. a mile south of the City of Belle Meade.

In my visits to Cheekwood, I have most enjoyed the Janpaese Garden and the related sand garden near the mansion. Standing near it, one can almost hear the ocean waves.

The year 2010 was marked by a grand 50th Anniversary celebration for Cheekwood, in which renowned artist Dale Chihuly furnished remarkable glass sculptures throughout the grounds. They were an elegant addition for both day and night viewing. This all was in addition to regular yearly presentations and events that include the 5-week Thanksgiving-to-New Year's Celebration with several events of its own.

The city lies along good transportation routes between major interstates I-40 and I-65. The city, an inner suburb of Nashville, is in close proximity to Vanderbilt University and Medical Center, one of the largest combined hiring entities in the state.

The State of Tennessee reported that the following local employers are among the Top 50 Employers in the state, according to personnel pool size.

Largest Numbers of Jobs for the AD 2020s

Vanderbilt is also listed among the top one-third of best colleges and universities in America by US News and World Report.

Healthcare research is a major thrust of ongoing activity at Vanderbilt University, examining new treatments for

Specifically, the study found that liberal individuals' brains included a formation for understanding complexities that was larger than those in conservatives' brains.

Simultaneously, these GOP followers had a larger amygdala on average, responsible for increased anxiety and fear responses. This is not a very attractive brain differentiation for the GOP. Interestingly, a psychiatrist lecturer I know had been rightward leaning politically, but became leftward leaning after suffering a stroke.