Among the Top 10 Safest Cities of over 75,000 residents in America during 2009 through 2013 is the Town of Colonie, New York, according to Information Please and CQ Press.

The yearly safest and most-dangerous city rankings are derived from population statistics and crime data at the FBI. Certain criminologists and a group of personnel at the FBI warn against using this information for city rankings, while some city representatives feel that their hometowns are even safer than the ranking suggest.

One consensus, however, is that everybody in the country wants American cities to be as safe as possible. Colonie is safe in terms of numbers and types of crimes committed yearly and the quality of its emergency services.

City sources report that "Colonie" means in Dutch "the settlement outside the city" and that is just what Colonie NY is. The town is a northwestern suburb of the larger Albany and is comprised of the villages of Colonie and Menands.

Colonie as a town has always been in the center of a Transportation Corridor that began with animal travel-ways, followed by Eastern Woodlands Native Americans that cut North-South and East-West trails through the land.

Many points beside the Mohawk River in and around Colonie proved easy to cross and native settlements grew along the river before European settlers arrived. Unfortunately, these same trails were used for war during the French & Indian Wars and the American Revolution. If you have a chance, enjoy the classic film or book Drums Along the Mohawk. 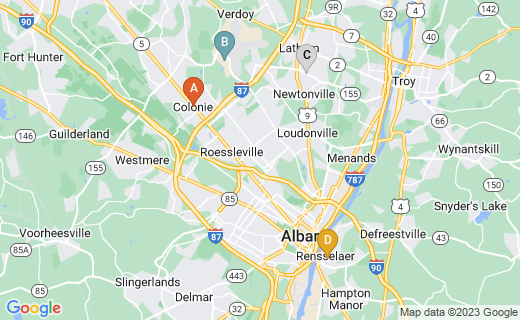 Wagons, horses, and canals followed Indian Trails through Colonie and along the Mohawk River after settlers first arrived. The railroads followed, then highways and the local Albany International Airport nearby.

Canal Towpath History-- Colonie established a community pocket park on the south bank of the beautiful Mohawk River, east of the Route 9 Bridge spanning the river. It offers an information kiosk that describes the original Erie Canal aqueduct of 1825, the larger Erie Canal aqueduct of 1842, and a three bridges at the location. The town has a few pocket parks and larger parks for recreation and relaxation,

An area of land on the riverfront in Colonie is under initial construction for revitalization that will being new residences and businesses to the riverfront as well as new attractions for visitors. Improvements in the waterfront and local roads will help to make the villages even safer with increased activity, but also increased law enforcement patrols and community awareness projects. Safety is a priority in all local schools, government offices, and businesses.

Local NY State Highways in the town include Route 5, Route 7, Route 9, and the I-87 Northway. In addition, residents have easy access to I-90, I-787, and I-88, the New York State Thruway, and an Amtrak Train Station.

The Dutch reportedly made good neighbors for two Native American Nations on opposite sides of the Mohawk River in the 1600s. However, the Mohawks on one side of the river and the Mohegans on the other waged war with each other over land ownership. The Mohegans wanted more land.

The commander of Fort Orange helped the Mohegans, in violation of a treaty; and to help the Mohawks, others of the Iroquois Six Nations arrived. Overwhelmed and their commander killed, the Dutch recognized the Mohawk deed as lands awarded by the treaty and moved out in 1626 to New Amsterdam.

During 4th QTR 2018, the Town of Colonie included about 84,000 residents and 20,000 job listings. Additional jobs are available to residents of nearby Albany as well.

Leading economic sectors in the Town of Colonie in AD 2000 - 2020 have been Sales, Office, and Professional Services, especially Healthcare Services. In the 2010s, a trend toward increases in Medical Professions is noticeable, mirroring Federal,State, and Local forescasts for high demand jobs nationwide from 2010 to 2020.

Jobs Consistently Needing the Most Workers