Statistics Canada, the nation's federal statistical website, shows us that as of 2006, 38+% of all Canadian residents live in the Province of Ontario. At that time, the population of Ontario was also increasing faster than the national average. This indicates the possibility of economic health and a number of job openings drawing residents the to province. Over 242,000 First Nations residents call Ontario home as well.

The city is also a huge tourist mecca. Further, by 2009, a full 50% of Toronto residents are immigrants form elsewhere and this speaks to many good things in the city that draw individuals, families, and business to settle here.

After World War II, international peoples moved to Toronto in droves. It has a cosmopolitan atmosphere today, with over 100 languages spoken in its streets, a gigantic Chinatown, and other interesting ethic neighborhoods.

Further, by 2009, a full 50% of Toronto residents are immigrants form elsewhere and this speaks to many good things in the city that draw individuals, families, and business to the area. After World War II, international peoples moved to Toronto in droves. It has a cosmopolitan atmosphere today, with over 100 languages spoken in its streets, a gigantic Chinatown, and other interesting ethic neighborhoods.

Some Cities In the Golden Horseshoe of Development 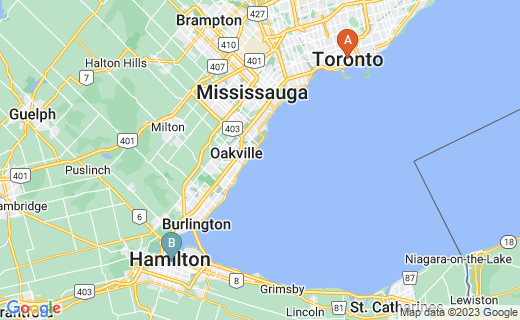 B
Hamilton:
Hamilton, ON, Canada

Some Celebrities of Toronto

Toronto has a colorful history in its over-the-top mayor Mel Lastman, a former appliance salesman. He likely reminded folks of the plaid-dressed Eugene Levy character on Second City TV – a song-and-dance used car salesman named Al Peck who quipped in commercials that “Every car has a story.”

it is all good fun - if you don’t get too close – and Mr. Levy also happens to be Canadian – from Hamilton, Ontario. Great fun it is! Mel Lastman Square honors former Mayor Lastman with 20,000 sq. ft. of open green space and attractions.

The motto of Toronto, written by the local tourist board is Toronto – You Belong Here . David Miller became Mayor in 2003 and put Toronto on a course for increasing economic development by attracting new business to the metro area, improving services and infrastructure (Yonge-Dundas Square - free events in 2009) and advocating for minorities of every stripe.

In addition, he has impacted gang activity positively through his own Racial Diversity Secretariat, new to the city after his election. He has been more socially progressive, in comparison to former Mayor Lastman’s salesmanship.

First Nations peoples migrated eastward from the Pacific Northwest and arrived in the Toronto area about 9,000 – 10,000 BC or somewhat earlier. French explorers arrived and created New France, but were overtaken by the British to form Upper Canada in what is now Ontario.

This single province held over 38% of the total Canadian Population in 2009 – 2010. It is currently the major workforce development area in Canada for all populations.

After the American Revolution, British Loyalists had gathered in Ontario, purchasing land from Mississauga Nation (Toronto Land Purchase of 1787) and settling to create provinces and cities for the future. The land that became Toronto became the provincial capital of Ontario and there was so much mud in the streets and land parcels that it was dubbed “Muddy York.”

Famous Yonge Street, the longest road in the world according to Guinness World Records, seems nearly always to have existed and a stagecoach line began operating along this route as early as 1828. A dozen years before this, First Nations allies/troops of the British were parceled onto First Native reserves and more closely controlled by the federal and provincial governments.They had used the Yonge Street route for hundreds of years.

Today, all bands of Mohawk Nation are recognized as part of an Official First Nation in Canada and Ontario and are quite active politically; compared to Mohawk Nation in the US, recognized in only one band on the same reservation that crossed into New York State. Yonge Street attracted new department stores and small businesses in the late 1800s and business increased through the 1900s, although a recession hit in the mid-1990s.

Projecting Population and Employment to 2031 in a Mature Urban Area is a detailed government document providing for the continued development of Toronto City and the GTA. Employment is expected to grow in

While many Private Sector bsiness are very large in Toronto, the Public Sector of business employs a far larger number of individuals, with 48,000+ in city government, 27,500+ at the provincial level, and some 16,000 at the federal level. The Canadian Federal Givernment is the largest employer in Canada.

As reported by Marketwire.com, data collected by the Toronto Board of Trade (est. 1845) found that at the end of 2007, the following companies employed more than 10,000 workers each. Altogether, Toronto supports over 150,000 businesses.

Though not all headquartered in Toronto or Ontario, many of these Top 10 Employers operate in and around Toronio. The companies were chosen according to a set of criteria guidelines use by CanadasTop100.com. These incude such benefits as tuition reimbursement and others.

These high demand jobs are listed from gathers of all listings on the Internet by WOW Jobs, Workopolis, SimplyHired Canada, and Indeed Canada - the best Job Search Engines for North America.

Job titles in BOLD type are still in high demand through 2016.

This designation included nannies, pet sitters, tutoring staff, and the more far-reaching "household management" positions, generally starting at wages of $10 - $12 or more plus room and board. Qualifications varied, but the High School Diploma was often the highest certification needed, along with CPR/First Aid and some other short certifications.

The large numbers of workers need in Finance and Business indicate a growing economy.

Caregivers/nannies are in high demand to allow workers to continue to succeed.

A Brain Trust of Canada: Higher Education and Research Asssociations