Amarillo, Texas and a Growing Economy

The Panhandle Workforce Development Area of Texas and its geographical location make an almost perfect square at the top of the state in the northwest sector of the map below. Another map below shows a close-up view of Amarillo that you can zoom to enlarge.

Amarillo is the largest city in the Texas Panhandle, which is designated an official Workforce Development Area. The Greater Amarillo Metro Area covers approximately four counties and the City of Amarillo lies in Potter County and part of Randall County as well.

For additional city reviews and job listings/forecasts for Texas, see the link:

Tourism is growing in the panhandle, because of the growing popularity of natural attraction. For instance, Black Kettle National Grassland on the border crossing into Oklahoma is named for Chief Black Kettle of the Southern and Northern Cheyenne people.

The Cheyenne had moved west and north from their traditional hunting grounds and their chief negotiated peace between several Plains Indians nations and the US Federal Government in the first half of the 19th century.

By the 1850s, the chief had led his nation to the Sand Creek Reservation in Southeastern Colorado at the US President's request, which went against the earlier Treaties of Fort Laramie and Fort Lyon.

Black Kettle and his wife were murdered in his Colorado village by US Army soldiers during a conflict during 1868 after the American Civil War, in the Battle of Washita River. 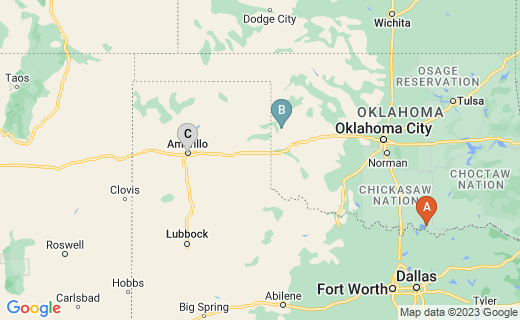 The city has been nicknamed The Yellow Rose of Texas, because amarillo means yellow in Spanish. In addition to this colorful name, Amarillo is also the Beef City, because it supports an active beef processing industry at Tyson's Meats, one of the largest employers in the metro area.

Beef cattle raising and processing was big business before the advent of the modern company, however, dating back to the trail drives of the 1800s and the boom created by the coming of the railroads in the late 1880s for faster and larger transport of beef products.

Amarillo is also known as the home of the Texas Cattle Feeders Association, since the city has been a leader in cattle feed production. It is also the headquarters for the renown American Quarter Horse Association. Horses and cattle as animal raising industries are both successful in Amarillo.

Aside from the designations above, Amarillo is also a nuclear weapons city. One of its largest employers, Pantex, is the only nuclear weapons assembly/dis-assembly plant in America. See a photo gallery of rail cars used to transport these weapons, now on exhibit at the Amarillo Railroad Museum: Nuclear Trains.

Rock Island Line of the Panhandle.

Amarillo is also recognized as one of the most famous stops on Route 66 in the 20th Century.

After the Civil War, several cattle ranches became prosperous in the Panhandle and the town formed in 1887 near the approaching railroad tracks that were soon scheduled to cross the Panhandle. In just about a decade, the Amarillo economy had grown with the easier transport of cattle and beef as well as manufactured grain products by rail.

Oil and gas were discovered in and near Amarillo around 1920 and this was a boost to economy in energy production. World War II resulted in the opening of the local Pantex weaponry plant after the Dust Bowl of The Great Depression devastated local economy. New manufacturing plants came to Amarillo in the 1970s - 1980s, and the city continued to grow via incoming propulsion and new businesses.

Downtown reconstruction began with restorations and additions of new commercial buildings around 1971 and continued on into the 2000s. Many local homes and commercial builds are listed on the National Register of Historic Places. Amarillo does a lot of business with Northeastern New Mexico and Oklahoma’s Panhandle region, becoming a business hub in the tri-state area.

The Pantex plant served as the last assembly point for 70,000 nuclear weapons produced in America during the Cold War.

Plutonium warheads went together with their triggering devices, all these nuclear weapons built in underground bunkers about 17 miles outside the city limits.

It is said in modern legends that many of the residents of Amarillo believe that the world will come to an end in flames caused by a nuclear blast.

At the same time, the city has the reputation of being proud of its association with nuclear energy and weaponry production, holding huge patriotic parades for Veterans Day, Memorial Day, and Independence Day.

Employment listings seem to have skyrocketed in the Amarillo area since July 2008, A downturn occurred around May 2009, followed by another increase in job listings, according to Texas labor statistics.

Looking closely at the numbers and types of positions listed on several thousand job search sites and company home pages, Indeed.com and SimplyHired.com has found the following leading local industries to be:

Many of the companies in the list above are healthcare, management recruiters, and trucking companies.

While Kinky Friedman planned his run for Governor of Texas, he honed his provocative writing skills on topics such as politics and life, along with the Kinky Friedman Murder Mystery series. The latter stars himself, his family, Texas law enforcement men and women, and some of his buddies in NYC as well as some that are purely fiction.

Amarillo Armadillo is my favorite of the bunch, because it tells the story of his life along with a very interesting serial murder problem that involves the Texas yellow rose. It is one of the few books that I could read a dozen times without tiring of it.