North Dakota is booming to the extent that even WalMart is starting new employees at $17/hour in and around Williston, according to newscasts.

North Dakota became the second highest producer of oil in America, after Texas, during 2012. In January 2013, the International Space Station (ISS) took photos of ND at night and found a huge mass of lights where there did not used to be a city. It's still not a city, but the night working lights of 150 different oil and gas companies in the Bakken formation, specifically between Williston and the Native American reservation (which owns much of the oil) surrounding New Town, ND.

On January 29, newscasts on Ohio's 610 Radio with John Corby reported that Williston had tripled its population from 12,000 to at least 38,000 and that many workers, even electrician apprentices were banking $100,000 per year there by working overtime 6 days per week. Housing is as expensive as NYC, except for the labor camps at $600/month. Construction has increased and restaurants can't serve everybody. RV camps have taken over fallow farmlands. An empty high school a year ago is now overflowing. Time is needed for Williston to catch up with the population.

Dozens of apartment buildings opened for new residents in the North Dakota Oil Patch in 2014 and with the price of a barrel of oil declining at the end of 2014, the rents came down as well. This makes North Dakota more economical as a place to live. Many workers and their families have moved from RV camps, man camps, and expensive hotel accommodations to these new apartments.

Job vacancies are still open in March 2015, with a total of over 26,000 listings at SImplyHired.com. At least 1,000 of these were in the direct line of oil and gas work, with others to related jobs.

Another 900 apartments opened during 2015 - 2016, with retail and office space in a multi-use complex. North Dakota continues to prosper. Apartment complexes have been offering perks and extra services to relieve day to day stress on oil patch workers.

Each of the proposed train cars will carry 100 tons of sand from Wisconsin resources. Sand and water are necessary for fracking/hydraulic fracturing to access oil in northwest North Dakota. Thjis is one reason that truck driving jobs in America have increased to over 900,000 listed openings. 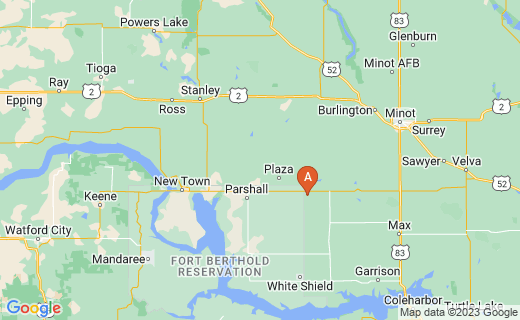 The Mass of Lights is East of Williston 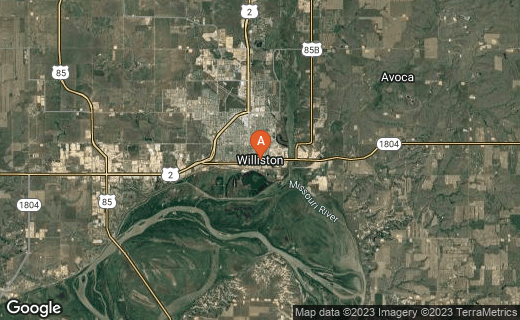 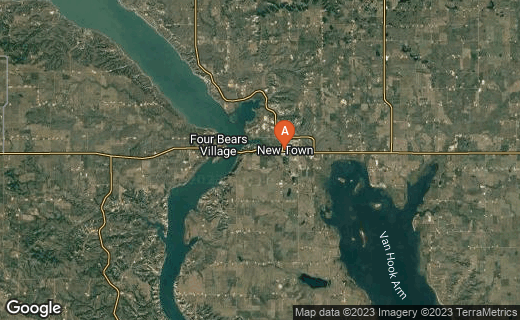 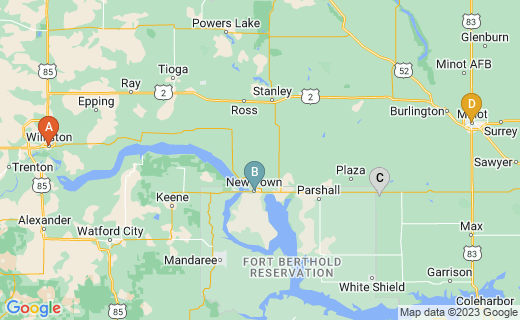 Oil On the Reservation - Hot Jobs and Business

So much oil is contained in Northwest North Dakota, that Kiplinger Magazine calls the state an Economic Powerhouse for the Future. In fact, 26,000 new oil wells are in blueprint stages for the next quarter century to 2037.

New Town is a small town in northwestern North Dakota near Williston and the Williston Basin oil deposit, about 380 miles west of the state's fastest growing place, the City of Fargo.

Despite it's small size up to to 2010, the job listings in and around New Town jumped an incredible 746% from June 2008 to January 1, 2010. The local Native American reservation already had some oil wells, but a 2009 Oil Boom struck on the Fort Berthold Reservation that includes the New Town area.

According to the US Federal Department of the Interior, the Fort Berthold Reservation is built on the Bakken Shale Oil Formation and oil fields with a supply of 4,300,000,000 (4 billion) barrels of oil. Hundreds of new oil wells may be needed before 2020. Approximately 40 were constructed in 2011.

So much oil resides on the reservation, that drillers are proceeding sideways under the man-made lake. The reservation extends across parts of 6 counties and sits over Bakken Shale Formation amid its estimated 4,300,000,000 (4.3 billion) barrels of oil.

The recent find was the largest oil deposit the US Geological Survey ever examined. This is good for the gas and oil business and related commercial enterprises plus trucking, along with accommodations, retail, groceries, and the dining industry that must serve the incoming workers. Over 500 oil wells could be operating by 2015. Some of the technician jobs available currently and in the future for companies such as Marathon Oil do not require a college degree or certification, but some experience is a plus. Job candidates are not required to be Native American or reservation residents.

Tribal elders foresee a possible need for financial advisors for workers in the future.

The Native Americans in western North Dakota number over 11,000 and especailly among the Three Affiliated Nations of the MHA - Mandan, Hidatsa and Arikara peoples - at least 1,000 new homes are needed. The MHA are the nation or tribe that helped Lewis and Clark on their explorations and trail blazing westward.

The Fort Berthold Development Corporation is owned by the MHA to develop future economic grwioth, including their planned refinery and residential building. The tribe owns many other businesses as well, including a small business loan division, a ranch and lodge, an IT component factory, and a technical business services firm.

Tourism is a major portion of the economy in addition to gas and oil energy production. Tribal Government HQ sits on the west of the Missouri River at Four Bears Bridge, a large tourist attraction. Here, the MHA operate the Three Tribes Casino and Resort, and the Little Shell Celebration Arbor and Campgrounds.

Within a 25-mile radius

New Town is on the Fort Berthold Reservation at the crossing of Lake Sakakawea and the renowned tourist attraction, the Four Bears Bridge. The reservation covers one million acres of land and has been the home to local Native American Nation members for over 100 years as of 2010. A full 10% of the reservation was appropriated and flooded by the US Federal Government in order to create Lake Sakakawea and some tribal members have stated that the oil boom is their recompense.

Founded in 1951 with 1 building in a field, New Town in 2010 is home to 1,500 people, but an additional 1,000 homes are needed around the area. An increase in oil production locally and with additional input for processing from the Alberta Pipeline are expected to drive up this already high demand. Tourism, Cattle Ranching, and Healthcare are also large contributors to the local economy. The Reservation Oil Boom has drawn not only increased tourist traffic and business seekers, but also reservation residents that had left during the recession of 2008 - 2009 to look for work elsewhere.

The New Town community offers a public swimming pool and children's playground and outdoor activities all year. for example, a winter fishing tournament is held annually, open to the public. A resort hotel, an RV park and a lodge are located four miles west of New Town and a motel is just east of town. Local campgrounds include Lewis and Clark Reunion Bay, Four Bears Marina camping, Pouch Point Bay, and Van Hook Arm (of the lake), among others.

Fishing, boating, swimming, water skiiing, snowmobiling, hiking, horse trails, and family activities are featured at many of the campgrounds mentioned above, while New Town even features a 9-hole golf course just west of the city limits.

For special events, The Sakawea Car and Motorcycle Show is held yearly in the summer, with a parade, a dinner pig roast, a dance, and family events all day. In addition to the car and motorcycle extravaganza, the Little Shell Pow Wow is an enjoyable summer event each August.

In autumn, a variety of hunting is featured in the New Town area, hunting includes antelope and deer, pheasant, ducks, geese, and others. December includes a number of annual street fairs, business events, and a Christmas parade of lights.