Most jobs advertised for Texarkana are found in the industries of retail sales and food service at all levels. Defense and healthcare sectors maintain the largest numbers of employees.

Although agriculture, child care, and elementary and middle school level education jobs were projected to expand currently though 2016, no evidence was seen of this in 2009 - 2013 job listings. No evidence was found of this as late as the end of 2016.

The projected growth began to appear in the wake of large Stimulus Funding projects beginning Summer 2009 - 2013. The area population is increasing gradually into the 2010s and justifies the additional educational and child care services jobs emerging in 2015.

Texarkana is considered a crossroads in the three-state region for transportation, commerce, culture, historical installations, and retirement living. A number of developed retirement communities exist in Texarkana in both sides of the city, along with upscale golf courses and family recreation.

Hospitals in Texarkana for Healthcare Jobs

Nearly 2,000 job openings are consistently posted by Glassdoor and some others can be found on Indeed and SimlyHired as well.

The most popular companies with workers according to Glassdoor are:

Below are the forecasted new job openings in Texarkana through 2022. A few of the occupational titles listed match current and increasing job openings found on Indeed.com, the search engine providing the widest coverage of job openings and trends.

Several of the job titles listed in the column below left match those listed in the next two sections and the matches are printed in bold type.

Before there was a city incorporated on the spot, Texarkana was the name given to the juncture of the three states of Louisiana, Arkansas and Texas. The incorporated city lies in Bowie County TX, named after James Bowie, and in Miller County, Arkansas. 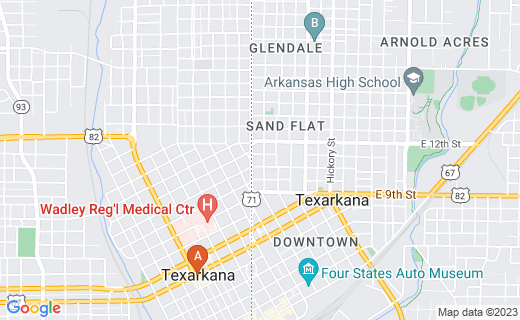 Beginning about the time of the American Civil War, the name "Texarkana" was bestowed on entities such as riverboats, beverages, businesses, crossroads, and others. Today, Texarkana is one city, but has a separate mayor for each of the Texas and Arkansas portions of the city.

By the 1940s, several railroads crossed through this area, creating the transportation avenues needed to make Texarkana a regional shipping and industrial hub. Agricultural products, timber, and mineral deposits formed the local economy. US Army installations during WWII added to this economy.

Healthcare is a leading industry in the Greater Texarkana Area, along with Retail and Wholesale Sales, gauging by the numbers of sales-related positions open in the city and county. Having been a crossroads for multiple railway lines and systems, Texarkana is considering high speed rail as the future of transportation in the metro area. The Arkansas Highway Commission has sought funds to study the benefits of high-speed rail to connect Texarkana to Little Rock and Little Rock to Memphis, Tennessee.

High speed passenger rail service between Little Rock and Memphis would create new jobs, because previous rail tracks were taken up after rail service became unavailable in that transportation corridor. Stimulus Package fund may be applied to the high speed rail study and toward the creation of related rail construction jobs.This additional mode of transport will bolster the Travel and Tourism Industry and provide business people with quick travel options.

High speed passenger rail service between Little Rock and Memphis would create new jobs, because previous rail tracks were taken up after rail service became unavailable in that transportation corridor.

Stimulus Package funding was applied to the high speed rail study and toward the creation of related rail construction jobs.This additional mode of transport will bolster the Travel and Tourism Industry and provide business people with quick travel options.