Athens is known by the nickname The Classic City. Athens, Georgia is circled by the highway known as the Athens Perimeter, much like an outerbelt highway around other cities. It is also called the Georgia 10 Loop and photos and descriptions of scenery and installations along the highway are available at the links below.

Two hundred years previously, back in the 1785, the University of Georgia was grated a charter. This event eventually caused a whole town to grow up around the new school and that town became Athens GA. This is testimony to how a college or university in a town can create economic growth with new jobs that draw residents and students to the area. The amounts and types research results coming out of UGA show much promise for creating new local jobs in emerging technologies and new career fields through the 2010s and beyond. All this creates a college town in the Top 20 College Towns in America, as recognized by Money Magazine.

Map for Athens, In Northeastern Georgia 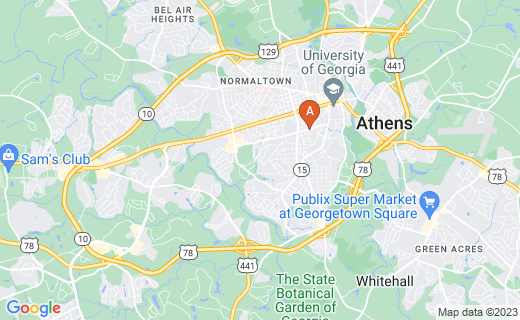 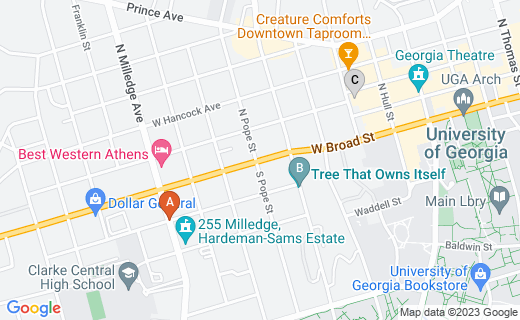 B
The Tree That Owhs Itself:
Tree That Owns Itself, South Finley Street, Athens, GA 30605, USA

City leaders grasped the concept of downtown/urban revitalization as early as 1980 in Athens. In 2009, UGA forms one boundary of the Downtown Area and about 100 taverns are supported in the commercial district of Downtown Athens. A residential area is also successful in the district, including historic and newer homes, public housing, apartments, and hotels.

The University of Georgia is a nationally recognized school that provides innumerable services to the community. On of these is a database of information that helps individuals and families to make New Year's Resolutions.

The UGA Office of Public Affairs offers an entire page of resolution resources during December to early January and topical help throughout the year at: UGA NEWS SERVICE.

The University of Georgia and its University Health Center monitor health and diease on its front webpage as well. ghe H1N1 and seasonal flu viruses have been spotlighted in order to prevent their spread. UGA helps to explain the recommendations of the Centers for Disease Control (CDC) for community and college environments.

Interestingly, UGA maintains an online magazine about the State of Georgia. It includes major stories and photographs of the people, events, and important issues around the state.

This publication online at the UGA website presents dozens of articles about the outcomes of useful research projects and other unviersity news and events. Many UGA colleges are quite active in research and discovering information that will help humanity. These include a school of Ecology, a division for Bioinformatics, the Center for Drug Discovery, the New Media Institute, a carbohydrate research center, a division dedicated to studying global diseases, and several others.

The UGA Bulldogs of the Southeastern Conference are active in Football, Men's and Women's Basketball, Golf, Baseball, Soccer, and several additional sports.

Georgia Perimeter College is a well known two-year college with several campuses that all award Associate Degrees in a number of fields. Degrees and certificates are awarded in a wide array of subjects and careers.

It continues to break ground on additional sites as the 3rd largest school in the state university system. Traditional, non-traditional, and online programs are all successful. In 2009, a specialized grant to education Hispanic students was most welcomed by the school. In addition to all this, GPC hits a new enrollment record every academic year.

A nationally known literary publication is supported by GPC at The Chattahoochee Review.