What Do I Need to Know about Drug Testing for Jobs?

Does the quest for a "drug free" workplace infringe on one's rights?

Since the late 1980s many companies and governmental agencies in the United States have subjected prospective employees to drug testing. It’s all very legal since the Supreme Court upheld the legality of drug testing as far back as 1986, ruling that it is not a violation of one’s Constitutional rights, particularly as they relate to the Fourth Amendment, protecting people against unreasonable searches and seizures. But the tough part is answering the question: What is a reasonable search?

Now drug testing is also used on students, welfare recipients, soldiers, convicts and parolees, but this article doesn’t deal with those situations.

These drug screens, as they’re called, come in various types and test for the presence of different types of drugs – illegal or otherwise. This article tries to inform people about what they should know when a company wants to collect and then analyze their bodily fluids, hair or other tissues before hiring them.

Drug testing requires that a specimen be tested on-site or sent to a laboratory, where it can be analyzed using mass spectrometry, an expensive and time-consuming procedure. Most of these tests check for the presence of five to 10 different drugs, illegal or otherwise. Moreover, the threshold of detection for most of these tests is 50 nanograms per milliliter. For comparison, similar tests for Olympic athletes have a much lower threshold, measured in picograms (trillionths of a gram) and are therefore much harder to beat, detecting the use of various drugs many months after their usage.

This test requires that a person urinate in a cup so the urine can be tested for the presence of drugs and/or their metabolites. The most commonly used test, the pee test is the easiest to beat because the urine sample can be diluted somewhat if the person simply drinks lots of water before urinating in the cup; or fake urine can be used or somebody else's, for that matter. Also, drugs such as aspirin, vitamins such as B-2 and B-12 or various herbs can be taken to flush a person’s system before taking the test, but the effectiveness of these substances is uncertain – unless you believe the guarantees of the people trying to sell them! Substances can also be added to the sample to detoxify some - if not all - drugs present within it.

Interestingly, an article in Wikipedia states that about five per cent of pre-employment urine samples test positive for drugs.

The use of this test is becoming more prevalent because it is less intrusive than urine or blood testing, and it is harder to adulterate or dilute the specimen. This convenience of usage makes saliva testing preferable for use in “random drug testing,” where the presence of drugs can be detected almost immediately after use, and also the “level of intoxication” can be measured with greater accuracy.

So called sweat tests are not used for pre-employment screening, because a patch must be applied to the person’s skin to collect perspiration over a period of one to four hours. This test is used only when urine sampling is not practical, such as by parole departments and child protective services.

The blood test is essentially the same procedure as the urine or saliva analyses, except the specimens come from a different part of the body. But the blood test has disadvantages: it is more intrusive and costs more; also, the urine and saliva tests detect the presence of drugs or metabolites much sooner. The greatest advantage for the blood test – from the point of the view of the employer of course – is that it is much harder to tamper with the specimen.

This test is designed to find drug metabolites in any hair sample taken from the human body. Theoretically any drug consumed within the last 90 days can be detected with this test; however, if the person’s hair is very long, the time of detection could be considerably longer than 90 days. One disadvantage of the test is that it’s more expensive than other tests, because the hair sample has to be sent to a lab, from which it can take up to three days to receive the results.

Furthermore, hair samples can also be tampered with using chemicals, such as those found in shampoos and other hair treatments. For example, the testable amount of THC (marijuana) can be reduced by using such treatments, because THC isn’t readily absorbed by the epithelial cells in hair. Also keep in mind that it can take seven to 10 days after a drug is taken for a strand of hair to grow long enough to be cut and then tested. So if you want to beat this dreaded test, just make sure you use drugs immediately before taking the test.

Fingernails or toenails can also be tested for the presence of drugs. Similar to hair, which contains keratin, drug use in nails has been measured since 1984. A specimen is simply clipped from the body, thoroughly cleaned, and then liquefied and tested. The advantages of this test are that the specimen is almost impossible to alter in any way, and the test shows what drugs a person has taken in the last six to eight months (depending on the length of the nail).

While a hair test can detect just about any drug for up to 90 days, detection time varies greatly when one is given a urine, saliva or blood test. THC and benzodiazepine (sedatives) tend to stay in one’s system the longest, a time measured in weeks rather than days. Ironically perhaps, some of the most dangerous and addictive drugs – heroin, methamphetamine and cocaine – stay in one’s system for only three to five days. Therefore, it seems pot smokers and users of Valium and Librium (called benzos on the street) may risk the greatest chance of detection. Nevertheless, an occasional pot smoker can beat a urine analysis in as little as seven to 14 days.

Drug Testing for THC in California and Other States

In recent times, many states have legalized the recreational use of marijuana. Therefore, many people are probably wondering if having THC in one’s system during a drug test would disqualify a person for any particular job. The answer is yes, because marijuana is still illegal according to federal law, regardless of statewide legalization. However, this issue could be handled differently in say California, Oregon or Colorado. In the future, lawsuits and/or more state laws could affect the issue as well, so stay tuned.

Keep in mind that it’s possible for people to get a “false positive” after taking a drug test. The Web site, www.Passing-Drug-Test.com, claims that more than 250 over-the-counter and prescription drugs can cause a false positive. For example, Ibuprofen can cause a false reading for THC; cold medications can do likewise for amphetamines; and antibiotics can cause a reading for cocaine. Also, according to a February 2011 episode of Mythbusters, eating poppy seeds before a test can give you a reading for opiates!

If you get a false positive, demand that you be given a second test. Unfortunately, corporations and governmental agencies seem to have all the rights regarding drug testing, but individuals still have some rights in this regard. However, you better act fast before even those rights disappear like the glaciers!

In conclusion, if you’re worried about the possible outcome of a drug test, educate yourself as much as possible before taking it. And if you’re really adventurous, try whatever countermeasure you deem acceptable given your code of ethics and/or level of necessity. Good luck!

Here are some drug testing products . . . 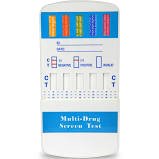