When I Grow Up: Jobs With the FBI 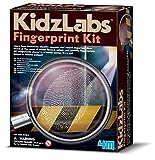 Fingerprint science projects are a hit with kids of all ages. The interest in fingerprint science may lead kids to a career in law enforcement, forensic science, or investigation of some other kind. There are a lot of different ways to solve crimes. This article teaches kids about the different types of jobs available at the Federal Bureau of Investigation (FBI).

So You Want to Be a Special Agent?

One big difference between Special Agents and Support staff is that Special Agents carry guns. One of the first things they learn is how to handle, clean and shoot their guns at a target. To graduate from the FBI Academy, Special Agents must pass a test on their shooting skills. They are then re-tested four times a year. (School never ends - even for grown ups!)

Special Agents must take care of their bodies. They have to be in great physical shape. New Agents are taught self-defense to protect themselves from criminals who may try to hurt them. They also learn special techniques for arresting people so that no one gets hurt.

To put Special Agents into real life situations, the FBI uses a training town called Hogans Alley. Sort of like a movie set, Hogan's Alley looks like a regular town, but it's actually make-believe. They use actors to confront new Agents with realistic crime situations. This is how new Agents practice what they've learned in the classroom.

If you think you'd like a little less action, there are several different types of support positions at the FBI. There are actually over 300 different jobs at the FBI. Language specialists translate foreign documents, emails, or text message into English.

The FBI employs many different types of scientists. A lot of them work in laboratories looking at hair, bones, and skin to learn about a person. Some other scientists can look at paint chips from cars to figure out how many times and what different colors a car has been painted. People who like to solve puzzles may want to be a Cryptanalyst. These specialists study secret codes and break them to reveal secret messages.

The FBI also employs computers scientists, pilots, fingerprint experts, engineers, writers, and lawyers. All of these jobs require special skills and training and a college degree is needed for most of them.

Application For Fingerprints By the FBI and Law Enforcement

How to Create a Fingerprint Science Fair Project

Fingerprinting Your Kids at School