Women in the Great Depression 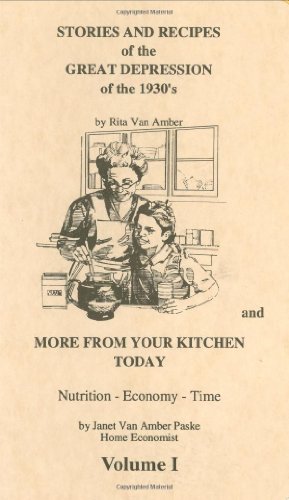 Whenever we think of the Great Depression I think we tend to think of men. At least I do. If someone were to ask me what is the image of the Great Depression I immediately think of strikers (all men) or breadlines (all men) or boys or men selling apples on the street. The only picture of a woman that comes to mind is this famous one of the woman in the dust bowl with her children.

Women experienced the Great Depression in a different way than men. Their roles were different back then and society was different. The New Deal did not extend to women and many women were faced with discrimination when seeking work because any job held by a woman was a job that was being taken away from a man. Moreover, women did not work outside the home after they got married and single women were relegated to careers in teaching, nursing or the domestics. So women had to be innovative, they had to find a way to survive that did not include help from the government.

My grandmother began weaving plastic strips into place mats and sold them. Many women had gardens and some started gardens, creating meals out of humble ingredients and stretching very little into enough to feed a good sized family and many times outsiders as well. My mother always had a bin of material that she kept just in case and many women never let anything go to waste making quilts out of scraps of material and bread pudding out of day old bread that could be bought for less money than fresh bread. Many things that we have today were the result of ingenuity by women during the Great Depression. In 1933, Ruth Wakefield, who ran the Toll House Inn in Whitman, Mass., invented chocolate chip cookies. Her “butter drop do” cookie recipe, dating from Colonial times, called for baker’s chocolate, which Wakefield didn’t have so she chopped up a chocolate bar instead, thinking it would mix into the cookie. Nestlé was so impressed with the cookie’s success that in return for permission to print the recipe she would be given a lifetime supply of chocolate. Too bad she didn't have a good lawyer for a friend maybe she could have scored more than chocolate. Nevertheless, she accepted, and the instructions for Toll House Cookies can still be found on packages of Nestlé chocolate chips.

Not everything was terrible. Women were uplifted in many ways because their contributions were worth more then. They no longer could rely upon the sole income of their husbands. Now with many husbands and fathers out of work women's contributions, whether inside the home or outside, were worth more and in many cases were the difference between surviving or starvation. No longer could they lean on their husbands, they were needed and this need gave them self-esteem; they were important and vital. They did all of this while striving to keep their husbands spirits up as well.

Things were especially difficult for women of color in the Great Depression. Previously, many women of color worked in domestic jobs. When the Great Depression hit women who could afford domestic help started doing their own chores to help out with the household expenses. Moreover, many white women started to compete for jobs that were previously held by black women in the domestic field. Many black women had to start their own businesses to keep from starving. Businesses like beauty parlors that were formerly done in the home moved into the commercial realm and boarding houses for single men looking for work away from home cropped up.

Women who were without families were more likely to starve in a furnished room suffering from shame than to stand in a bread line or take charity. In places like New York they would ride the subway in order to sleep at night and stay warm. They suffered in silence, some finally collapsing on the streets from hunger. You didn't see women selling apples on the street, standing in breadlines or camped out at Hoover-ville. Single women stayed in the shadows until things either got better or more than likely they died a quiet, lonely, invisible death.

I wonder how women will fare as the current Depression worsens. In many ways women are much better off. We are not discriminated against nearly as much and of course we qualify for all government programs. However, even the programs that Obama instituted tended towards “men's” work in construction rather then “woman's” work. Today we still have a great deal of racial discrimination in the workplace and the black unemployment numbers are always higher than the white and this includes women of color. The number of single women and single parents in America is much higher than it was during the Great Depression. Unemployed single women still tend to keep quiet and bare their shame alone not wanting anyone to feel pity for them. And in some ways women who are left out of the American Dream are in the worst of both worlds, during the Great Depression women were losers if they didn't have husbands, today we are losers if we can't make a go of it economically without a man. I guess time will tell.