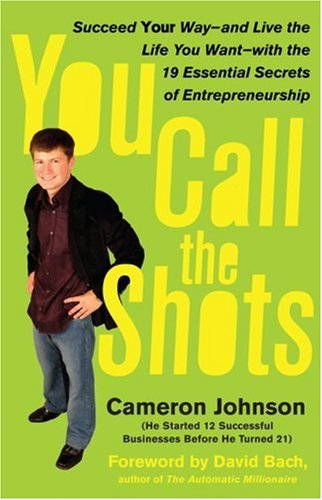 You Call the Shots: Succeed Your Way-- And Live the Life You Want-- With the 19 Essential Secrets of Entrepreneurship
Buy Now

Cameron Johnson, age 9, on TV with his first business

Cameron age 19 - after the sale of CertificateSwap.com.

How To Raise Your Kids To Be Like Cameron

It's said that even as a toddler, Cameron was interested in making money and he had always been able to sell any product put in front of him. At the age of 7, he would sell vegetables from his red wagon door-to-door to neighbors.

When he was eight years old, he wrote a letter to Donald Trump. (He tells the story of what happened in this video.)

Cameron Johnson started his first serious business at the age of 9, when he added the words "made by Cameron Johnson" to the back of 50 party invitations he had made for his parents, using Photoshop.

By age 11, through his printing business, Cheers and Tears, Cameron had generated several thousand dollars in savings.

After some shares as a Christmas gift the year he was 11, he became very interested in the stock market and learned all he could about how it worked. He soon sold the few shares his parents had given him and also invested more than $1,000 of his own money into companies of his choice. In just a few years' time, he had multiplied his investment seven times.

"It wasn't cool to be selling Beanie Babies in junior high," he explains.

At 13, he used part of his saved capital to start My EZ Mail, an email-forwarding service. It was designed to help young people protect their identities online. The money was used to pay a programmer to develop the system, and within two years My EZ Mail was generating $3,000 per month in advertising revenue.

In 1997, Johnson joined forces with two other teen entrepreneurs, Aaron Greenspan and Tom Kho, to create Surfingprizes.com. This business sold scrolling advertisements which appeared at the top of a user's web browser. Within a year, Surfingprizes.com was pulling over $15,000 a day.

After starting college at Virginia Technical Insitute, Cameron was struck by another bright idea. Together with friend Nat Turner, he launched CertificateSwap.com, a site which allowed users to sell or exchange unwanted gift ceritficates.

They turned down $10 million in venture capital, because the conditions attached to it were too onerous, choosing instead to sell the business in 2004 for an undisclosed six-figure sum.

Cameron's latest book, You Call the Shots: Succeed Your Way--And Live the Life You Want--With the 19 Essential Secrets of Entrepreneurship, was released in January 2007.

Cameron's latest project is MillionaireSecrets.com, an online community giving entrepreneurs the resources they need to start, grow, and profit from their business.

He also serves as a Board Member to Jobs for Virginia Graduates, a non-profit organization helping high-school students stay in school and provide work-based learning experiences.

You Call the Shots: Succeed Your Way-- And Live the Life You Want-- With the 19 Essential Secrets of Entrepreneurship
Buy Now

When Cameron was a freshman in high school, and Surfinprizes.com was making $15,000 a day, he was asked to become an Advisory Board Member to FutureKids, a Tokyo-based company and Sega of America who at the time, built the Sega Dreamcast Console. He consulted both companies for a number of years. In August, 2000, he was approached by a best-selling Japanese author who asked if he could "ghostwrite" Cameron's autobiography. He agreed and the book was published several months later, and was an instant best-seller in Japan.