Argan oil is the big beauty fad - you are seeing it headlining beauty products, everywhere. And now argan oil gets added to almost anything benefiting hair and skin condition.

I've wondered about some of these from the time I started hearing about the miracle claims of Moroccan argan oil, especially after viewing an online video of how it is produced by the peasant women of Morocco. Follow with me while I look into it. You may or may not want to buy the products that are being produced ....seemingly everywhere... from this unique nut oil.

Argan Oil- what is the Big Deal?

I don't make any claims for Moroccan Argan Oil, these are simply those promoted by the products or articles about the use of argan oil. Any scientific research will be noted, if found.

Claims made for benefits:

Ingested, it is claimed to lower cholesterol levels, stimulate circulation and strengthen the immune responses.

Said to taste something like peanut butter (I don't know because I've never personally eaten any), Argan oil is described as being slightly darker than olive oil, with a reddish tinge.

It can be used for cooking, and gives a rich, nutty aroma.

What is Happening to this Plant Resource?

You would think that Moroccans would be trying to protect this important resource. but argan oil is a fairly recent, and booming, fad in the beauty industry. How is the country responding to the production and cultivation of this resource?

"Nearly half of the argan forest disappeared during the 20th century - and average density in the remaining half dropped from 100 to less than 30 trees per hectare. This historical pressure on the forest was driven by demand for high quality charcoal (especially important during the world wars) and, more recently, to conversion to agricultural production of export crops such as tomatoes...

A Catch 22 seems to be in place

While the argan oil is raising the economic status of the local population involved in its production, their increased wealth makes it possible for them to buy more goats, an important wealth by-product for them, the goats destroy the argan trees (because the goats climb the trees to graze their leaves). This leads to a direct threat to the wealth benefit of argan oil to these families.

Better cultivation and techniques taught to the local populations 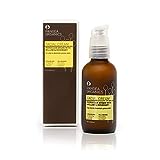 Pangea Organics Facial Cream: Moroccan Argan with Willow & Rosemary - for Oily to Blemish-Prone skin - 60ml
Formulated for oily to blemish-prone skin, this stimulating yet calming balm keeps all the elements of oil-rich to blemish-prone skin in check. This is a great multi-purpose facial cream.
Buy Now

How Is Argan Oil Produced?

The production of argan oil is a long process. Each nut has to be cracked open to remove the kernels, mostly done by a painstaking, traditional method. It is estimated that producing one litre of oil takes approximately 20 hours work.

"It is Berber women who are solely responsible for harvesting the nuts and producing the oil, and they are doing so in fair trade working cooperatives...

The cooperatives have initiated an ecosystem reforestation project to help preserve the argan forest." -care2.com

Certainly there is a struggle going on to preserve both the natural resource, the fair trade rights, and the economic opportunity of argan oil production.

Do You Want To Use Argan Oil Products?

After reading this, do you want to continue to support the argan oil production business from Morocco?