Workplace Stress: How To Deal With A Bully Boss

8 Steps To Deal With Your Bully Boss

One of the last people experiences I had to deal with in my professional career was with a bullying boss. Her favorite line was "Who's your boss?" Not only was she a bad boss, she was belittling, incompetent, a skilled liar, and the name most referenced on employee exit interviews. Even though she was not liked by anyone including her own boss (who was a great guy) the reason why she still had a job eluded me and the executive secretary.

Now, she wasn't the first bully boss I had ever dealt with but she was the lesson I needed to learn. She rattled me in a way that I was not prepared for but this time, things would be different. This was my last chance to deal with a workplace bully once and for all Since I was about to make a major life change. I decided to go to an extreme by taking control of the situation and calling her out. Now, I'm not advocating these steps because, like I said, I was in a different phase in my life but here's what I did. Maybe some suggestions could help someone deal with workplace bullies in a way that makes a positive difference for them.

I Had To Admit That I Was Dealing With A Bully

Like Dr. Phil says: "You have to name it to claim it"

There are plenty of ways to deal with a bully in the workplace but until you find them, it's pretty stressful. I was losing sleep, could barely eat and dreaded going to work. I knew she was the cause but until I acknowledged that I was being bullied at work, the stress was worse. Calling her by her rightful title, Bad Bully Boss B***h (yes, I went there) I relieved my stress and could actually think about how to deal with her.

I Stood Up To The Bully Boss...in Public

I used certain keywords when I did it

Naming is the first step, now it's time to take action by getting back some of my power. One thing my bully boss did was that she would publicly speak to me in a derogatory manner. So what I did was that I told her, in a slightly elevated voice, that I did not appreciate the unprofessional way she was speaking to me. I also told her that she had no right to be verbally abusive towards me. See what I did? I made sure that it was known how I felt with those words and phrases. Was I playing office politics with a PR spin and a touch of HR anticipation...HELL YES!

If someone tries to humiliate you in public, you have every right to stand up for yourself and protect yourself. But in the workplace, it's different, right. So what if your bully boss or workplace bully decided to have a tear at you in public?

Using those specific key words, would you call out your workplace bully/bully boss out in public if they tried to humiliate you in public?

I Paid Attention and Documented Her Bullying

Electronically AND on paper

Like any abuser, after an altercation, there is that "honeymoon" period where things are copacetic. STOP! Not so fast. Don't fall for the "we're cool" act because it will bite you. Workplace bullies are abusers and cowards. To protect myself, I documented the altercation almost immediately in as much details as possible because it was fresh in my mind. I had a copy on my machine, and a personal flash with other copies. I even wrote it down when I could. All of these tools were MY OWN. I made sure that if anything were to happen, my documentation would be accessible because I used my material, not the company's I paid attention to how she spoke, the morale in the office, how she treated certain people...I wanted to create perspective because those documents could be considered legal documents should it come to that. So I made I was as detailed as possible and tried to stick to the facts. Bullying bosses can't fight facts :)

I Got Some Upper Level & Outside Allies

Each company's Human Resources department is different; some are useful while others are less than useless. In this case, as it turned out, the HR manager disliked her and wanted to get rid of her too. I was not arrogant enough to think that I was going to bring her down but it was nice to have someone I could get advice from about how to deal with this particular workplace bully. While she was nice, I made sure that I didn't tip my hand too much and I documented my interaction with her as well. She was HR and her loyalty was to the company and professionalism while my loyalty was to me, myself, and I. I was chummy but not overly so AND I actually got advice from others outside of the company. Never place your eggs in one basket.

I Got Some Professional Advice

Spoke to some friends and researched

Dealing with a workplace bull and the stressful situations that come with it was wearing on me. I did some research, spoke to some friends. I found this book that was helpful and I went to the library. It mentioned that if needed I could get a lawyer and while I knew that was an option, it was nice to see it in print. I decided that I wasn't going to go there but I followed some of the techniques on how to deal with a bully boss, workplace stress, the whole thing. They helped me get some perspective and to plan my exit strategy.

Some useful books on dealing with WorkPlace Bullying and Bad Bosses

I had written a post a while back and didn't realize just how prevalent this was. So I decided to share some of the books I researched, They have some great tips and some resources for anyone who's dealing with bully bosses, workplace stress, workplace bullying in general...check them out and take whatever knowledge they can give to protect yourself

The No Asshole Rule: Building a Civilized Workplace and Surviving One That Isn't
Buy Now

The Bully at Work: What You Can Do to Stop the Hurt and Reclaim Your Dignity on the Job
Buy Now

How Would You Deal With A Stressful Workplace Environment?

What I'm realizing is that workplace bullying and dealing with bad bosses is all too common. As a human first and foremost, my loyalty is to myself and not a company or a paycheck. But, then again, I'm different. So I'm curious about everyone else's take on which option they would choose

Which is the best way to deal with the stress of workplace bullying?

Took Some Time Away & Weighed My Options

It's good to step away from the situation if you can

I had some days off and I took them. Since I was a temp for this company, I was able to reduce my schedule there to a few days a week. It reduced my income from them but it relieved me the stress of having to constantly deal with such a toxic workplace environment. I breathed easier and funny enough, some other work opportunities started showing up. It hit me, that after all this stress and dealing with the Bad Boss Bully B***h, I HAD OPTIONS!!! I was feeling more powerful and she was starting to matter a lot less.

If I had these before, I probably would have handled things differently but I'm glad I was able to check some of these out and get some tips

When You Work for A Bully: Assessing Your Options and Taking Action
Buy Now 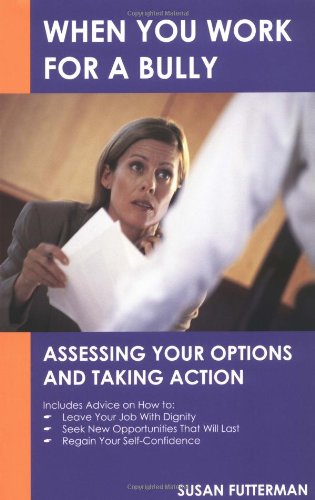 When You Work for a Bully: Assessing Your Options and Taking Action
Buy Now

The Complete Guide to Understanding, Controlling, and Stopping Bullies & Bullying at Work A Guide for Managers, Supervisors, and Co-Workers
Buy Now

I Made My Plan

With Options Came An Exit Strategy

Coming back from a break, I realized how refreshed I felt. Workplace stress can really play with your head and your health and that was what was happening to me. When I realized that I was actually a good worker and had options, I decided to figure out an exit strategy. In my case, I was preparing to make a major life change by moving to another country so my decision was “How long should I stay?” vs “Where am I going to go?” I had gotten an instructor position that paid better but it was infrequent and I needed to make sure I could fund my move. So I decided to put a date to it and just do it. My health was a major point for me and decided that life was too short to lose sleep over the nonsense.

I weighed my options, made my plans and decided the direction that was best for me...AWAY! As it happened, she was having me do menial clerical stuff when my expertise was working on cleaning the database. It was a waste of time for me and the company because the job was far from done. Since I had to wait for her to get approval for certain things, she would procrastinate and let things just pile up on her desk. She was wasting my time and for a non-profit to shell out money for me when I wasn't allowed to do my job properly, I had too much respect for myself, and the company to continue.
So I took my stand a little earlier than planned and I went to HR and gave notice. I showed her my documents, told her what was happening and how if I was not doing what I was hired for, there was no need for me to be here and waste money. The next day, I grabbed my stuff, said some quick good-byes and was outta there with a huge grin on my face. Some people said I looked way too happy but I was done with her.

As it turned out, I was getting closer to departure and got the opportunity to travel around the country teaching a company how to use Outlook 2010. At the end of the day, I decided I was worth more than she was and just said NO!

And the rest is history...for another lens :)