Don't let this heading scare you! It simply means "the order that words appear" in a sentence.

For the most part, English sentences are based on subject, verb, other (S / V / O). The subject is the noun (person, place, or thing) doing the action or being (verb), and "other" is everything else.

For very short sentences (five words or less), commas are usually unnecessary. You can use them for clarity or emphasis but meaning can often be understood by the reader without them.

We will be looking at commas when:

A series is anything following, one after the other. In English, a series can either be words or parts of sentences that are similar. The following examples still use the S/V/O syntax.

The boys held memberships in Boy Scouts, the Canton Glee Club, and the Richfield Hockey Association.

Notice the comma after Scouts and Club. Commas are visual signals to help the reader organize ideas.

The Weaverton family dined at the Eatery, watched an adventure movie at 4-Star theater, and spent the rest of the evening by listening to a violin concerto.

So, here the commas are separating the various activities in which the family engaged. Again, the commas function as visual aids to help the reader grasp related ideas. To make this point clearer, let's look at how awkward the sentence would be with the commas out of place.

The Weaverton family dined, at the Eatery watched, an adventure movie at the 4-Star theater and spent the rest of the evening by listening to a violin concerto.

Still using only two commas, the sentence is now awkward because the words that belong together are separated by misplaced commas.

Parenthetical is a big word meaning "aside." The term takes its name from the parentheses (). So, a parenthetical word or phrase is an expression or idea that's somewhat related, but not important to the main idea of the sentence. And, sometimes the "aside," changes the S/V/O syntax to a O/V/S, depending on placement.

Example: Oh, I didn't know you were there.

"Oh" functions as a parenthetical word. It ads very little to the sentence. Such words are separated by one or more commas.

I ate too quickly, as I often do, and gave myself a stomach ache.

"As I often do" can be left out of the sentence without changing the main idea. Notice how it is set off by commas.

When the S/V/O becomes changed to O/S/V/O, a comma is often used to separate the introductory clause. A clause is a phrase that includes some form of a verb. For the purpose of showing how commas work, I will limit the examples to dependent clauses. "Dependent" means that the group of words cannot stand on their own as a sentence. These types of clauses are best set off by a comma.

Example: Although he heard the explanation, the judge was not convinced.

"Although he heard the explanation" is an introductory clause because it "introduces" something about the judge. The important part of the sentence is "the judge was not convinced." Within the clause is the verb "heard." What makes this clause dependent is the word "although," which puts a condition on the phrase that requires more information.

The syntax of the sentence is O/S/V/O.

When it started to rain, I opened my umbrella.

"When it started to rain" is the dependent clause. Because it starts the sentence, a comma is used to separate it from the main part of the sentence. The word "when" requires more information than given in the clause itself. If we were to reword the sentence into a S/V/O syntax, no comma would be necessary.

I opened my umbrella when it started to rain.

When the syntax is inverted to a O/S/V/O, a comma is used.

Main Comma Topics of This Hub

Commas have many uses not covered within this hub, and I have limited the topics to a few very common uses that are often misunderstood to help the beginning or struggling writer. As you can see in some of the examples given, commas are useful tools to help the reader grasp ideas.

A common practice in modern punctuation is to leave the final comma off before the conjunction (and, or) of the last item in a series. In most cases, the reader can grasp the meaning without this final comma. If you choose to use this style, make all such sentences the same. Flipping back and forth between using the comma, but omitting it later (or vice versa), shows style inexperience and implies apathy on the part of the writer. Always do your best. The care you put into your work will draw the reader back to the hubs that you write in the future.

A Professor's Brief Explanation of Syntax 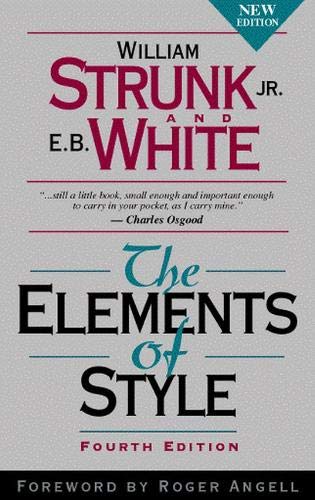 The Elements of Style, Fourth Edition
This was one of my required textbooks in college. Many colleges and universities today still use it as a standard. I highly recommend it.
Buy Now