How to Restructure Your Hubs for Higher Hp Ratings and More Web Traffic.

Don is a Writer and a Storyteller. He has published over 7 books on varied subjects along with many articles and commentary on his blogs.

Writing on HubPages and making Money

OK, I am a writer and I publish often on HubPages.

I have done so for years and over this time, I have watched HP go through a some serious growing pains as they have evolved to where they are today. Growing Pains for both for themselves as well as for myself and my fellow HP writers.

One truth that I have learned about HP is a pretty simple thing, but is is a fact. HP is a business and it exists to make money.

And, they will make money, using mine and my fellow writers works to drive income, for themselves.

It is what they do, they provide a platform for quality articles that will make a profit for themselves, as well as a portion of that profit for the writers..

Some of my fellow writers will jump up and down and complain, as I have done myself, on occasion. about the constraints they implement to accomplish this,

But, come on people, HP provides an excellent forum for us writers to exhibit our works, and, as such, is a highly respected provider of quality articles by Google and other search engines..

So what, if they use ads to make their money and only give us a share. At least we writers do get something from them for our works that other people will read and enjoy.

But, will it ever be enough money for all of us, the starving writers of HP?

In my opinion, if you are a writer looking for that elusive "quick fortune", HP will never be your path to such riches.

There are exceptions, but honestly, there are other paths to writing riches, and you should go to them now, if this is your true goal of using HubPages.

Rate my HUB for ME!

3.8 out of 5 stars from 8 ratings of Using Wordpress for HP Traffic

A book of Basic Writing Tips for the beginner. 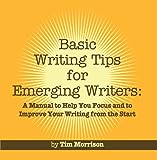 I purchased this book to learn more about what i needed to do to make my Hubs more readable, and thus more popular.

As HP evolved their requirements for what they now call an EVERGREEN Hub or article, they felt it necessary to place certain roadblocks in the way of people who were writing what they considered a low-quality Hubs.

You see, low-quality Hubs do not get good search results, wit Google or any of the other major search engines.

Is this necessary? Well, I do go to a number of other "writers sites" and I try to keep up with how they manage their writer;s content.

And, I have found that, overall, the Grass is not Greener on the other side of the fence when it comes to Writers sites. For one reason or another, I have invariably backed off from most of these other sites, and happily returned to my HP domain.

And, each time, I plod along with a better feeling of confidence in the overall flexibility of the HP site itself. as well as in my writing's safety.

I will not go into the details here, but, if you want to meet HP's requirements for a Quality Hub, then read their tutorials and you will see their well-defined details on formatting and quality standards listed quite clearly for you.

And, they now have that little "Evergreen Checklist" box at the top of every new Hub for you to use as you are writing and constructing your Hub.

As you write, you will see check marks appear in the table that indicate where you, the writer, are progressing in producing what they prefer to see, as indicated by word count, number of pictures and videos used, etc..

From my perspective, they cannot be any more obvious about what they want to see in a Hub, so I try to follow their lead and write my new Hubs with one eye on this new table and the other on the quality of my writing..

By the way, using this new tool has actually led to my Hubs getting some increase in traffic.

HubPage Limitations and Me!

At one point, over a year ago, I had quite a few Hubs published than I do now. But, my traffic overall was so bad that it was really embarrassing.

As you all know, over this same period, the Great Google and HP implemented changes that punished all of us that were writing low-quality Hubs.

Many of my fellow Hubbers even dropped HP and moved on to other sites for their works, Most of us though, just hunkered down and rode out this storm of change.

I, myself, was forced to accept the reality of this new writers world I lived in and objectively re-evaluate my own works one-by-one with a much more critical eye.

Improving my Hubs, for HubPages and Google.

I spent a number of hours just going back and re-evaluating my Hubs, from my very first Hub to my latest release and analyzed what I had written in each.

I then established just what it was I needed to do raise the quality pf my old Hubs/ I put this information into a checklist for each Hub to help my writings show better to the world of readers. Here are the top changes that I determined was needed;

It turned out that, unintentionally, I had a handful of main categories for the Hubs I had previously written. These categories were RV and Camping Instructions, Short Stories, Poetry, Travel Photography, Recipes, and personal Commentary. These were my favorite subjects, whether I wanted to admit it or not. Several years of writing made the point for me.

I had Hubs ranging in word count from 200 to over 5000, depending, it seemed, on my mood at the moment. And I also noticed that more was not necessarily always better, when the subject was not clear nor written to the right audience.

Some of my Hubs were timeless, in that they would be as interesting five years from now as they were now, while others were already dated and essentially just dead articles written in the heat of the moment, for the moment. Some were more commentary than subjective.

How many relative Photos and Videos were in the Hub that provided interesting information for the reader. I had many Hubs with just one lame picture that I pulled from my own photography, and not from other libraries, when I should have.

I had to reconsider my preference here and admit that I could never have enough of my own photography to enhance my writing. So, I started adding Pics from other libraries that gave the appropriate permission for their use.

Were there Links usef and if so, were they actually fresh and did they provide good supplemental access to more information on my Hubs subject?

How well structured was each Hub? Did the information flow well and was it laid out so that the reader could get to my point easily and did my Hub's structure help or hinder the readers enjoyment.

I realized that some of my Hubs used only a few capsules and when pulled up by a reader, they immediately seemed to be "long-winded" or not very informative. This is a curse for any writer when trying to capture and keep a readers attention.

I was a lousy follower of what my Hubs were doing for or against me. I used to check maybe once a week to seem my reads and to read other peoples comments.

Well, these counters on your Accounts page are very important to your articles popularity and thus success. I realized that by ignoring my readers, I was essentially crippling my own chances of growing an audience of Followers.

While in actuality, I could use what I had done "right" in previous Hubs to define what to change in my not so popular Hubs.

A rewrite project that took months

Using this personal checklist, to prioritize my work, I spent quite a bit of time, sporadically I admit, to pull my existing Hubs up to my own new and powerful standards.

And, it worked.I have not magically become Rich overnight, but I did rise slowly trough the rankings for Hub Writers on HP, but also in my rankings with Search Engines.

But, after a while, I became aware of a new reality for me and other writers on HP.

There are certain, already written, Hubs in my account that just are not going to have a long life on HP. I had to figure out what I could do with these, next. And that is the subject of another Hub of mine, called How to Use WordPress to drive traffic to your Hubs.

Improve your Vocabulary for Writing