How to Handle New Hubbers and Their Get-Rich-Quick Schemes.

Hub Tricksters, are they Thieves?

How many Times does it take?

And I am asking it of HP mainly, and of my fellow Hubbers as a point of contention.

When will there be a 'filter" implented to block these obviously unacceptable attempts to steal money from the rest of the Hub writing world.

That;s right, they are stealing my money from me as well as my fellow Hub writers, and it needs to be stopped.

True, these tricksters are often a "new person", from somewhere around the world, and someone told about how to make some easy money.

They were told how simple it was, all they had to do was get their fake, copied, poorly translated and often copied, articles onto the HubPage site. They just want you to "click" on their article so that they get credit for a "read". Easy money to them.

For your entertainment below are a few scenarios of how this is done by anyone, anywhere, even if they have only a rudimentary understanding of the English language;

1- First, Sign onto HubPages. That's free and easy for anyone to do.

2- Either put a phony picture of no picture at all on your Profile page. But preferably you should use one that is cute or sympathetic.

3- Write a Profile about your fictitious self. Tell everyone that you are a writer who just wants to learn how to be a better writer. You want to learn. You want to meet people and expand your horizons, YaDa YaDa YaDa..

4- For your first hub, you just walk across town and get a friend or someone to steal a brochure on the local city or its attractions, written in English. Then go back to your personal computer or school, or library computer and write this brochures text, verbatim (because you don't have a clue what you are typing) into a hub, and publish it.

5- Sit back and wait for a sympathetic person, a few hundred miles away, or even across the world, to click on your Hub and tell you how they always wanted to travel to such an exotic or interesting place.

BAM! You got your first CLICK for a READ and even more points towards more money if the reader writes a comment. Essentially you just got your first "Double Dip" into the HP coffers.

6- Repeat the process the next day, then over and over, hoping for even more traffic for your stolen articles.

One thing I love about this Stolen Content Scam is how, at times, all of the photography happens to be so professional looking.

OK, I use photos from Image sites myself, but I really have a hard time finding the grand and perfect shots that these fake travel Hubs have gotten from scanning the brochures.

Or, as is often the case, some will have no pictures at all.

These scammers will often not even have the resources to copy a picture, or the knowledge of how to download one.

These are the ones with just generate the text and have no other content in them.

Some of these tricksters will take an article or story, written in their language and run it through a translater software package. These translater packages will attempt to convert the original Indian,or Spanish, or Italian, or whatever language into a document that is in English.

They have one big problem when they do this though.

And that's the fact that everyone, in every country, writes their documents using slang. Slang is the curse of these translater packages and an improperly converted document shows up as being almost unintelligible.

You see the translater software has to guess at the meaning of all of the unknown terms and words and how to interpret them. The really smart translators will list these problem phrases or words for the person running the translator to resolve.

Anyway, once a document is translated, the Scammer just follows the same steps as I listed above and waits for those Clicks and Comments.

Oh, and another payout, if they are slick enough.

A book on Social Media Scams 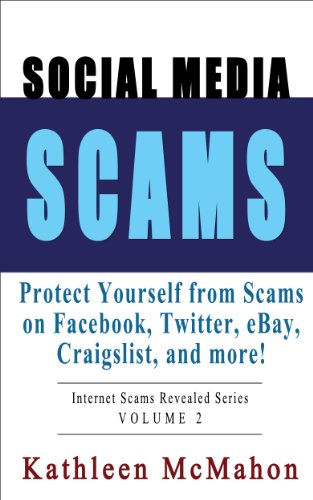 Social Media Scams: Protect Yourself on Facebook, Twitter, eBay & More (Volume 2)
This is a great read for people who are not aware of the different ways people use social media to take advantage of others.
Buy Now

I know all of you have tripped over (accidentally clicked On?) a Hub where the writer has a Profile that describes how hard their life is in their country.

And they usually go on about how they hope to make enough money on HP to support their families, or to help themselves get through school, etc.

These are the "Tear-Jerk" scammers, hoping to touch your sensitivities in some way just to make an easy buck.

I am so Smart that you must read my stuff

I really love these tricksters. They give themselves a great resume of; Universities they attended, places they have traveled, and some even list awards they have won.

These tricksters sprinkle copied articles among a few that they actually wrote themselves, and after even a quick comparison between some of them, it becomes obvious that these articles had different writers, just from the writing styles used.

These people get a small audience from the copied stuff and get numbers from their low quality documents that have a great and interesting title to hook you in. That is until you actually recognize the article for what it was; poorly written text with poor spelling and horrible grammar.

There are a number of other active people who generate Hubs that are designed to make money without any real content, but, I hope you get my point by now.

These sub-standard Hubbers are only pulling the rest of our works down.They are stealing our Hub Income for themselves without even a visible attempt to show themselves as writers, whether they are good or bad writers.

Well, Someone should tell them the truth.

And the truth is that they need to find another way to make easy money.

I don't know of anyone that writes Hubs that is driving a new Ferrari from their HP payouts.

And they also need to know that the ones of us that might make a decent buck, not including myself, by the way, work their butts off and spend long hours researching and writing very, very good Hubs.

And, these people need to know that a decent buck is not the same as a lot of stolen bucks!

Sympathetic Reasoning of a sort?

I see so many of these people who cite their poverty as a justification for their poor writing, but honestly, is HP the site for charitable work?

You, the reader has to accept the fact that you are not helping these people with a Click or two.

Be honest, and tell them the truth; They cannot write, and they are going down the wrong path to make any reasonable amounts of money over the long run.

I understand that there are people who desperately need to make money; for themselves, their families and their futures.

And, I am assuming that these people who are constantly deluging us, the rest of the HP population with horrendous collections of words, thrown together just to meet a minimum word count, possibly are destitute.

I am also assuming that they are not a group of lazy, devious, half-educated people who use the freedoms granted to each of us on the world-wide-web for easy, short-term gains by writing what I call TRICK HUBS.

A Trick Hub is one that has a title that although it is quite interesting, when it is clicked upon, it leads to a collection of words that provide neither information nor entertainment for the reader.

And I intentionally call them a "collection of words' because they do not resemble a real article.

A real HP article that has a general theme that is written and supported throughout with either interesting facts, or entertaining stories or prose.

And it is written using proper grammer and spelling.

The Tools of the Trickster

These Tricksters use their tools well, to get you to move your mouse (or finger, these days with touch screens) over their icon and give them a CLICK.

What's so wrong with one little click you say?

Money that HP allocates to their writers for their Hubs actually getting a READ or IMPRESSION with the goal of the reader then seeing an ad and clicking on it..

Money by the way, that our roaming reader might have given to you.

You see, if that reader who clicked on a ridiculous Hub that promised a Cure for Cancer, as an example, and actually gets some useless or even unintelligible text that has nothing to do with the subject inferred, he may just say; Well that's enough fo that, I'll just go somewhere else to find what I want to read.

And, your Hub, a seriously written summary on say; Cures for Certain Cancers, never gets the click it deserved because the reader has moved on.

You lost money and the Trickster made money, and the reader has a lowered opinion of HP as a sight worth coming back to.

What can WE the honest and sincere Hub Writers do?

Honestly, we, the sincere hub writers have almost no control over these Tricksters and their theft of our readers attention.

But we can use the few tools that are available to us for a certain level of punishment of these people who are only working for immediate and easy gains.

FLAG the HUB! every time you see one.

HP does provide us with one powerful tool that we can use for the blatantly mis-represented Hub, and it is called the FLAG option.

Once you open one of these tricksters' Hubs, before you decide to close it, if you look up in the top corner, there is a small icon that says FLAG.

It is a simple tool to use and HP does respond to flagged Hubs pretty fast.

When you click on the Flag icon, you will open another window which provides you with two levels of complaint that you can use.

The first level is a list of standard compalints where you can easily select the appropriate one for HP to investigate about the Hub.

The second level is where you can write your own personal complaint in a text box to clarify the problem you have with the Hub.

I have found that HP responds and investigates these Hubs very quickly and even though you don't get a response, the writer and.or the Hub specifically, will disappear from HP.

Of course that is if your complaint is a valid one.

For more on using the FLAG option click here.

If you want to stop some of these tricksters, FLAG them!

If we all are diligent and flag these tricksters, we will be improving the quality of the Hubs on HP, and possibly our own income levels from HP.