My daughter has Marfan's Syndrome

What is marfans syndrome

Marfans syndrome is a connective tissue disorder. Disorders of connective tissue affect the skeletal system, cardiovascular system, eyes, and skin. Connective tissue provides substance and support to tendons, ligaments, blood vessel walls, cartilage, heart valves and many other structures. In the Marfan syndrome, the chemical makeup of the connective tissue isn't normal. As a result, many of these structures aren't as stiff as they should be.

picture of my daughter when she was a toddler

Features of Those with Marfan's Syndrome

She was not diagnosed until she was 13, but we had problems since she was born. The first problem was that she could not suck to eat. I was breastfeeding her and she was not able to get enough to eat so she lost weight in her first month. I went to a lactation consultant who was a Godsend. They had me use a contraption I had to wear around my neck with tubes to my nipples to stimulate her to suck. The container had formula in it. I had to do this every two hours for weeks but it paid off. She learned to suck. I ended up nursing her until she was 20 months old.

The next indication something was not right was that she was walking on her ankles as she started walking. I took her to Shriner's hospital in Los Angeles for help and they made her an apparatus for her shoes that to this today she needs to wear in shoes still as one leg is longer than the other which has caused pain and hip protrusion. This cannot be corrected because her connective tissue is not strong.

This lens is dedicated to my daughter

and to everyone with Marfan's syndrome

We got the diagnosis when I took her to a specialist for what seemed to be a sudden severe scoliosis that was bending her in half and shortening her height. A specialist tested her and finally he told us she had marfan's syndrome. I started crying in the doctor's office as I read what it was. I know now you can live with it. Then I thought it was fatal which it can be as her aorta can rupture suddenly at any time. Because of the severe scoliosis she was sent to an even better specialist at Loma Linda Hospital where we lived near at that time (2006).

We saw a kind doctor there who decided she needed surgery right away (within a month) because she had two curves one of which was over 90 % the other was over 70%. The surgery she had was to straighten her spine and put in screws and a pole to help her body hold itself up. The surgery itself took over 12 hours. She needed 4 pints of blood from all the blood loss the surgery caused. All of this has not been easy for a 13 year old to go through. She is now 18. She will have to have another surgery by the time she is 23 to take care of the parts of the spine they could not do in this surgery.

(picture is of her trick or treating as a child)

There are not a lot of books on marfans syndrome 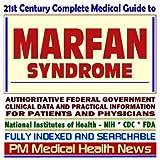 Children with Marfan's should have regular eye exams beginning at an early age because nearsightedness is a common condition. It can be corrected with prescription glasses or contact lenses. Many children experience problems with the lens of the eye which can become torn from its supports and become dislocated.

A child with Marfan's syndrome should be checked regularly for curvature of the spine (scoliosis). Children with scoliosis should be referred to an orthopedic surgeon who may prescribe a removable brace to stabilize the spine. My daughter has not ever worn a brace, but from her surgery she has two metal rods going up her spine in her back.

Surgery is occasionally recommended to correct an indented chest if it presses severely on the heart or lungs. Some people, without significant heart or lung problems may elect to have corrective chest surgery for purely cosmetic reasons.

Heart problems may occur because the Marfan's syndrome may cause leakage of the mitral or aortic heart valves. These valves control the flow of blood through the heart. Defects of the mitral valve may cause shortness of breath, an irregular pulse, and undue tiredness. My daughter does have a leak in her heart which has caused a pool of blood near her heart. She sees a cardiologist regularly for this and he keeps an eye on it. They may do open heart surgery and almost did, but for now they have decided not to.

Defects of the aortic valve can lead to serious heart failure. In addition, the main artery in the body, the aorta, can become dangerously weakened and rupture. Rupture of the aorta has been a cause of sudden death in some people with unsuspected Marfan's syndrome so rigorous physical exertion is discouraged.

Because these heart conditions may not produce any obvious symptoms, those with Marfan's syndrome must have regular checkups by a cardiologist to monitor the effects of treatment and to detect possible complications. Annual echocardiography (ultrasound study of the valves and aorta) is recommended. Medications (e.g., beta-adrenergic blockers) may be given to prevent aortic dilation.

In 2014 my daughter had to have open heart surgery because her heart was failing. She is only 21. It was failing from her mitro valve not working. It was just broken. The doctor went in and fixed it so that the valve could work again and pump blood in and out of her heart. She is still recovering.

Despite Marfan's syndrome she lives a normal life. Not only that but she is quite talented.

a drawing of my daughter's

Some of her artwork

She sells quite a bit of it at my zazzle store