I believe I was 14, 15 or 16 years old when I decided I needed to create my own bucket list-- a list of things I wanted to do before I die. Well, I didn't EXACTLY think of it that way. For me, it was just a list of all the things I would want to do if money and time and other people's opinions weren't an issue. These were things that I really wanted to do, but maybe couldn't at the time. I looked at my list a lot when I was younger. As I got older, I still had it, tucked away into a folder. But I didn't look at it very often. I was too caught up in college classes and working.

During my final year of college, I was thinking a LOT about what the heck I wanted to do with the rest of my life. People kept asking me, and I didn't really have a good answer for them. I had some ideas about what I wanted, but nothing in particular.

Or, so I thought. I went to look for the bucket list I'd made nearly a decade earlier. I had quite a few things written down, quite enough to draw upon. I found that some of the things I'd listed I'd already done, which was kind of a neat revelation. I had already voted in two presidential elections (now four), learned sign language, and went to Bermuda in the summer of 2008.

And then, of course, there were some things I'd listed that I no longer wanted to do. That's when I decided I would refresh my bucket list at least once or twice a year (maybe even more than that), mostly adding goals that hadn't been there before, but sometimes removing goals that no longer fit me or that I'd already accomplished.

I also thought the BEST way to do this would be to put it somewhere online where I can see it, but also share it with others. In the first 3-4 years after I finished my undergraduate degree, I was very depressed about being either unintentionally unemployed (being let go) or being underemployed, so I didn't linger on this webpage often as it depressed me even further. A few years after that, I was able to actually check some of the smaller items off of my bucket list. I'm still underemployed, and still trying to find a job that will help me get where I want to be and allow me to eventually be able to accomplish some more of the smaller things on my bucket list, as well as the bigger ones.

Of course, I also hope you'll also get something out of this bucket list. (You can use it to figure out what to stick on your bucket list if you like. Far better than just New Year's Resolutions...)

So here I go with my bucket list! I've broken my list of goals down into sections for you (and for me- easier to think about a list of any kind when you break it down this way)...

EDIT: Christmas 2012, my grandfather asked me what I'd really like to be doing right now for work. I told him-- and my grandmother-- about my plans to start YouTubing. I wrote out an estimate of what I thought everything would cost, and much to my surprise, my grandparents agreed to give me what was basically a business grant to help me get started. [Grant= don't have to pay back; so much better than a loan.] You can find me on YouTube under the name CherryAmbition. (I would link to it, but unfortunately HubPages doesn't allow more than two links to any one domain like YouTube.)

EDIT #2: In November 2013, I quit my umpteenth retail job to go back to school for an Internet Marketing Master's Degree. If all goes well, I will graduate with my degree around Thanksgiving 2014. (Yes, just one year, as it is an accelerated program.)

EDIT #3: in November 2014, I completed my Internet Marketing Master's Degree and graduated with an A+ average (not quite a 4.0 but close). I plan on getting an Internet marketing position of some sort while also making YouTube videos again.

EDIT #4: It's the end of September 2017, and I am in yet another retail position that I loathe. Getting up in the morning to go to work is like pulling teeth (but I'm doing it to myself). I'm job searching for something within Internet marketing, and if/when that actually happens, I'll let you know. I'd also still like to make more YouTube videos on a regular basis (despite the "ad-pocalypse", notifications being messed up for subscribers & YouTube's new rule making it more difficult to add Patreon links to your YouTube videos and main page). But I simply don't have the time to make videos, or the money to spend on them (at least when it comes to how-tos and hauls and more).

Things I Want To Do Soon, But Need To Plan Out Carefully

These are things I have to think out first before I do them, as they are a much bigger deal and affect other aspects of my life.

Things I Can and Should Be Doing Now, But Keep Putting Off...

Even when these things have the ability to improve the quality of my life...

I am a procrastinator by nature, something which I'm forever suffering the consequences of. If there's something I know I should do, but really don't want to, I put it off until I finally have to do it. The following are big things that would improve the quality of my life, and yet they take so much energy, I've just decided I'll do them when I'm ready...

I guess this would kind of be your "American Dream" type stuff with the picket fence and all...

Things I want to learn to do, but learn to do WELL...or just well enough...

Because of my outdoor allergies, camping out in the woods or a jungle is out of the question. The only place I can become one with nature is the beach. So, I'd like to try out the water activities below:

Unless otherwise noted, I would likely stay in a 4 or 5-star hotel or resort in the following areas (if I didn't visit them by cruise ship):

I always hear about them on TV, in magazines or on the internet. For once, I'd actually like to be a part of the event rather than just hearing about it...

Things That Just Don't Fit Into A Category

They really don't. So I've listed them all below...

If you're thinking about creating your own bucket list, or you just want some ideas for some New Year's resolutions and want some help, or if you already have a list but want to improve it, the books below might inspire you and help you out...

Dream It. List It. Do It!: How to Live a Bigger & Bolder Life, from the Life List Experts at 43Things.com

While this book mostly lists things that are for self-reflection, it also lists several things that you could add to your bucket list. Use this as inspiration to get yourself started. 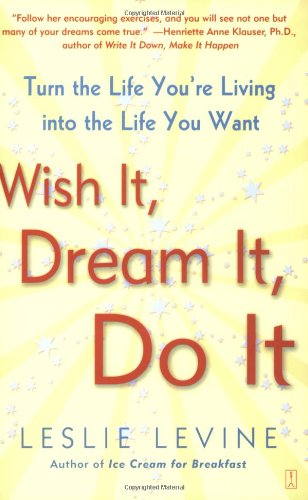 Sometimes, there will be things on your bucket list (or just life in general) that you want to accomplish, but you either feel like you can't or you don't know how to. Anything from circumstances to self-confidence can be a road block. This book will help you figure out how to deal with those issues in order to help you achieve what you want to achieve. It requires a bit of writing, but the writing will help you work through the road blocks.

Alice Pyne was a teenage girl with cancer who started a bucket list blog, even though she knew she wouldn't always be well enough to be able to complete all the items on her list. She was blessed to be able to complete most of her wishes, though. But she did pass away on January 12, 2013. While it's incredibly sad considering the circumstances, it is also inspiring. The blog (which she started in June 2011) documented the things she was able to cross of the list. If you like, visit her blog, and leave condolences as well for her family. Currently, her mother and her younger sister, Milly, are blogging there now.

NOTE: One of the wishes on Alice's bucket list was to get everyone (else) to have a bucket list. Start your own in her honor.

BucketList.org is actually a great site to list your bucket list on. As good as Squidoo? Probably not, but still good nonetheless. (I just joined and added just a few things from my own bucket list.) You can also look at other people's bucket lists, as well as see what they have & haven't completed and why they want to complete certain items. Also, if they have managed to complete something, there might be a story about how they went about doing it. They (& you as well) can add photos & videos to go along with the story.

My profile on this website can be found under my same name, Cherrybomb2009.

Thanks to former Squid/lensmaster Rick (a.k.a Dismantlerepair) for suggesting the site!

A mood/dream/inspiration vision board is basically like a picture version of your bucket list. It serves the same purpose- visual representation of the things you truly want in life. It's something you can create so that you can look at it daily and be inspired by it. Oprah.com has something like this-- a feature where you can make a vision board online.

One of mine is pictured above. The second one is a work in progress. While they do not include everything I have on this bucket list webpage, they do include a lot of it (the nose ring I want, the tattoos I want, the driving lessons & driver's license I wanted (and eventually got in 2012), the car I want (which was a Jeep Wrangler & is now a Jeep Grand Cherokee), the type of home I want, the beaches I want to live near, my desire to be my own boss, etc). I still need to add more experience-based photos to it, as it does seem heavier on things right now. I've already started a second vision board to add more stuff to. There's no rules to making one, except that 1) it should contain the experiences & things you want the most, and 2) it can't have anything negative on it, not even words like "not", "can't", "don't", etc. An example of this would be to write something like "I will be healthy and energetic" instead of "I do not want to be sick anymore".

Just another way to visualize your dreams and aspirations...

So, has this inspired you to create your own bucket list/list of things to do? Do you already have a list? Think there's something I should add to my own list?