Just imagine with me how the headlines must have looked on July 30, 1588. The most powerful naval force in Europe had been devastated and sailed towards home on its last legs. How did this battle come about? How did the "Invincible Armada" get cut in half? Let's take a look.

The Spanish Armada is probably the most well-known element of the Anglo-Spanish War, but in order to understand the Armada itself, we must first understand why it was built at all.

Spain and England in the 1560’s sought every opportunity to harass one another. One main cause of their animosity was economic. During the Colonial Period, Spain and England both held empires abroad. Both possessed colonies in the “New World,” and trade between the mother country and her colonies was a large source of income. England was well known for her privateer fleet, which raided the wealthy Spanish merchant vessels en route to unload in Spain. The raids and privateering caused bitter feelings between the two countries and led to small, sporadic conflicts prior to the full scale war.

A second, and just as important, cause of the enmity between Spain and England was religion. Spain, a historically Catholic kingdom had been expanding its empire in the 1560’s and attempted to force Roman Catholicism on the Protestant Low Countries of modern-day Holland and Belgium. England, however, was decidedly Protestant as a result of Queen Elizabeth I’s ascension. In a bid to solidify her own throne, Elizabeth agreed to militarily aid in the “Dutch Revolt” against Philip’s religious oppression. By openly taking sides with the Dutch, Queen Elizabeth declared her opposition to Philip II and Spain, thereby bringing to a boil the 25 year simmering of Anglo-Spanish animosity. 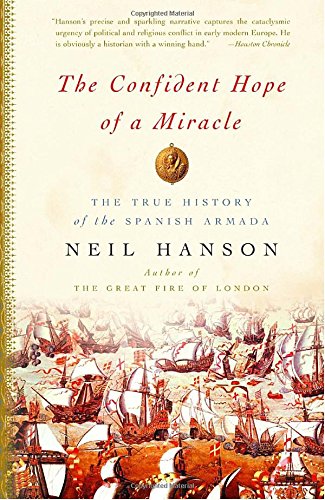 The Confident Hope of a Miracle: The True History of the Spanish Armada
Buy Now

The year 1585 saw the first major conflicts in the Anglo-Spanish War. England’s foremost naval captain, Sir Francis Drake, set sail for the West Indies where he engaged Spanish vessels on several different occasions. Overall, he gained the upper hand in the West.

Back in Europe, however, Philip II was beginning to build a fleet in preparation for an invasion of the British mainland. His plans were temporarily thwarted when Drake and the British fleet surprised the Spanish port of Cádiz and destroyed a large number of Spanish ships.

True, Spain had already begun war preparations by 1587 when Drake prevailed at Cádiz, but the execution of Mary, Queen of Scots, in 1587 proved to be the spark that set the Spanish fury ablaze. The crucial point about Mary’s execution was that it was called for by Elizabeth I, a Protestant monarch. Mary was an avowed Catholic and Philip’s Spanish empire took her execution as a personal affront against all Catholics. Spain took upon itself to visit retribution upon the Protestant Brits.

The Armada Under Construction (1587)

Before her death, Mary, Queen of Scots, had attempted to claim the English throne as her own. When she died, she passed her claim to Philip II of Spain. This gave Philip even more incentive to take a military force to England. Not only would he prove that Catholicism was superior and gain a huge trove of wealth for Spain, but he could very possibly gain control of the British throne.

Because of the religious nature of Spain’s endeavor, Pope Sixtus V allowed for Philip to collect what he called “crusade taxes.” These taxes were used to finance the construction of the great armada that would soon sail against England.

The Plan (on Paper that is)

The “Invincible Armada” was ready to sail. It was May of 1588. The original fleet consisted of approximately 150 ships. These ships would carry over 8,000 soldiers and almost 18,000 sailors. This was quite a force to reckon with, but the plan on their departure from Lisbon was to sail to the Netherlands and pick up another 30,000 soldiers who were waiting there. This plan would bring their total army to almost 40,000 foot soldiers with another 20,000 sailors and a massive fleet in support. So far, so good, thought the Spanish.

Nothing is as good as it seems, at least when it comes to the strategic planning of the Spanish navy in the 16th century. The fleet left harbor in early July, 1588. The entire British navy was mobilized and watched from Plymouth, ready to defend England’s shores against the invasion. The Spanish would have been intercepted as they made their way to Holland, but Mother Nature had something else in mind for everyone involved.

Spain had set sail with high hopes for a successful campaign, but their plans were quickly changed by none other than the wind. England lay in wait at Plymouth, ready to engage the Spanish and, hopefully, to repel the attack. The Spanish were heavily delayed by the inclement weather, but this weather also made it impossible for the British to leave their port. Spain had the chance to completely destroy the English fleet at Plymouth but their commander Medina Sidonia, who was extremely inexperienced, chose to take no action and leave the enemy alone. This decision would be severely regretted.

England’s navy was able to make sail soon thereafter, and they managed to catch up to Spain’s ships. The Armada turned to face the pursuing Brits, and it looked as though the battle would ensue, but at the last moment Sidonia ordered Spanish ships to make for deeper waters and flee once again. They hoped to meet with their army at Calais and they did beat the British there. What they found once they arrived was not what they were hoping for though.

Spain had hoped to gain another 30,000 troops from their forces in Holland, but what they actually found in Holland was a disease ridden force of only 16,000. To make matters worse, the army had no transportation to Calais and the Armada would have to wait at least six days for the soldiers to arrive. Only one problem, thought Sidonia. The British are coming, and fast.

Once English forces arrived, they engaged the Spanish fleet. In an especially effective tactic, they used some of their damaged ships as “kamikaze” torches, loading them with tar and pitch, then setting them adrift towards the cornered Spaniards. This tactic caused the Spanish Armada to scatter and make slow progress northward. It seemed that England had the upperhand, although they had not inflicted heavy casualties.

The Battle of Gravelines

The full-scale conflict finally materialized at Gravelines, a port in the Spanish occupied Netherlands. England had the advantage in maneuverability, but Spain possessed the superior firepower. In the end, maneuverability proved more desirable, and the British were able to sink 5 Spanish ships, with the rest of the Armada forced to flee even further northward.

After the “Invincible Armada” was shown to be not that invincible, they then proved that experience pays. Sidonia felt that the only option was to continue sailing north, and follow the coast around Scotland and Ireland. He hoped that this route would allow the Armada to return to Spain without meeting the English forces again. Again, it seemed a solid idea on paper, but the Spaniards had no knowledge of the harsh northern winters. They would soon gain such knowledge.

Off the western coasts of Scotland and Ireland, the fleet met immense gales which forced their ships in toward the coast. Because of the fleet’s previous damage and weather wear, the ships could not make shelter and were forced into the rocky coasts. The bitter winter weather caused over 5,000 soldiers to die of exposure.

It was not the homecoming they had hoped for when they left. At their departure, the fleet consisted of over 150 ships and would hold over 50,000 men at its largest capacity. What the townspeople saw sailing into Santander in the spring of 1589 was an emaciated fleet of 67 ships and only 10,000 men. Over half of the Invincible Armada had been lost and even more lives had been taken. Philip II is said to have responded upon the news of his defeat that “I sent the Armada against men, not winds and waves of God.”

England truly believed that God had delivered them from the threat of defeat and Elizabeth went on to become one of the most beloved monarchs in British history.

What was the ultimate cause of Spain’s defeat? It was most likely a combination of her commander’s inexperience and the superior tactics of England’s Sir Francis Drake. But an opportune storm or two doesn’t hurt either.