What Is The Wollemi Pine?

The Wollemi pine is said to be one of the world's oldest and rarest trees. Known for many years only by it's appearance in fossils, the Wollemi pine was discovered alive and well in a secluded part of the Wollemi National park, near Sydney in 1994.

This was an astounding discovery at the time and was considered the biological find of the century. These rare trees were found in the depth of the park by Dave Noble a NSW National Parks and Wildlife Officer and enthusiastic bushwalker. The Wollemi National Park is the largest wilderness area in the state of New South Wales. To some degree it is not surprising then that the Wollemi pine remained safe and undiscovered for so long.

Prehistoric looking even by their very appearance, the trees are tall with vaguely pine-like foliage, multiple trunks per plant and an unusually rough trunk, said to resemble cocoa pops cereal.

Since it's discovery, collaborations from research institutes around the world, including the Smithsonian, have occurred to bring this plant back from what was believed, for so long, to be extinction.

On the world scene it's one of the most outstanding discoveries of the century.

Have You Ever Seen A Wollemi Pine?

Well it Isn't Actually A Pine...

Despite being known by it's common name - the Wollemi Pine - it isn't actually classified as a pine. Although it is a conifer, a broad classification that includes species of pine, cypress and sequoia it is not grouped in the family Pinus - which is home to species such as the Caribbean Pine (P. carabaea) and the Monterey Pine (P. radiata).

The Wollemi pine (Wollemia nobilis) is a conifer belonging to the family Araucariaceae. Trees belonging to this family are said to have been widely found around the globe during the Jurassic and Cretaceous periods. After this they are believed to have fallen into decline and eventual extinction. Modern day surviving relatives include the Bunya and Monkey Puzzle pines and the New Zealand Kauri.

It is believed by researchers that the Wollemi Pine specifically was present in abundance across Australia from the Mesozoic era up until the Tertiary era (approximately 250 -1.6 million years ago).

A Unique Property of The Wollemi Pine

The fact that the Wollemi pine has the capacity to grow multiple trunks means that it can be difficult to determine how many individual plants there are in a stand of trees. Because of this, geneticists have tested the trees for their DNA in order to differentiate between the individual plants - and found that there was no difference.

This is completely unprecedented. Essentially, the results that were obtained from tests would normally suggest all the trees had been cloned from a single parent tree in a lab. Astounding. it is the only known plant that lacks normal genetic diversity.

With features such as this, the Wollemi pine really feels like it isn't from this age, but from another time that is truly foreign and strange to us.

World Heritage Listing Thanks To The Wollemi Pines

The discovery of the heretofore believed extinct Wollemi Pine in the Greater Blue Mountains Area was a major reason for the area being World Heritage Listed in December 2000.

So Where Are The Wollemi Pines?

Since their discovery and subsequent propagation, Wollemi pines can be found around the world. Scientists in Australia worked in the early days after the plant's discovery to propagate them from cuttings and seeds, and both these methods proved successful. Cloning technology was also used, and the primary goal of this has been to ensure the continued existence of this species.

As for the naturally occurring stands of trees that were first discovered near Sydney, very few people know the exact location. What is known is that they are located in a dense area of forest in Wollemi National Park outside Sydney. The trees located there are the only known wild Wollemi pines on the planet. Experts agree that the spot is highly sensitive to disruptions that could endanger these remaining plants. In addition, there are only 100 trees in existence in the wild.

Another reason for the sensitivity that surrounds these plants is their extreme age. The wild Wollemi Pines are suspected to be up to a few thousand years old - and are even more unique for that fact. Some debate over their age, however, stems from the strange coppicing characteristic that these trees have. They branch out from the ground in individual trunks, stemming from the one plant. Because of this, the age of only the individual stems can be ascertained at this time - not the whole plant. 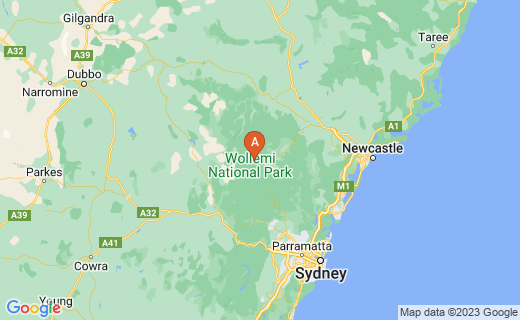 The location of the few remaining wild Wollemi Pines

The Wollemi Pines - Not Safe Yet

Although there has been a great effort made to increase the population of these plants worldwide to ensure the species survival, their status in the wild where they were originally found is also very important. Questions as to the exact nature of the reproduction of the trees and their possible connection to each other in the wild mean that chances can't yet be taken with their exposure to factors that could potentially risk their survival.

Among the biological risks to the species include Phytophthora cinnamomi. Phytophthora is a soil-borne pathogen. It can be spread by water and also brought to the spot on the soles of bush walker's shoes. Infection by this pathogen could mean the destruction of the wild population if allowed to take hold in the area. This is probably the biggest reason why the tree's location is kept secret.

After the discovery of the Wollemi pines in 1994, collectors eagerly sought to procure newly propagated Wollemi Pine seedlings. This came after years of intensive research into propagation techniques.

Getting Your Own Piece of the Past

Back in 1999 the Botanic Gardens Trust, Sydney issued an exclusive licence to Wollemi Australia to propagate and market the Wollemi Pine worldwide.

Today, a decade on from their first discovery, you can buy and grow a Wollemi pine of your own. Ranging from $77 - $110 AUS for a seedling, the Wollemi pine is well on it's way to making a comeback. Whether a collectors piece or merely a novelty, buyers of the Wollemi pine see it as their chance to own a piece of the distant history. it also represents their contribution to redistributing this amazing living fossil around the world.

Buy Your Own Wollemi Pine

The story of the Wollemi Pine is a touching one. Not only does it engender wonderment - what an amazing plant! - but it is a gift to our generation that no one was expecting. During the natural evolution of this planet, and then later as a result of human kinds sometimes irresponsible use of resources we have allowed many species to be trodden underfoot. Uncountable species have been lost to extinction, before we ever had a chance to regret or understand the full implications of our actions.

There are many lost species that we can only imagine or at the most view their remnants behind glass in sterile museums - never in their true beauty and in the vitality of life.

The Wollemi Pine is one such inhabitant of earth that we have had the wildly improbable good fortune to get back from extinction. And isn't it wonderful with it's weird prehistoric ways?

Take some time to appreciate that our generation has been given a great opportunity. Here in this 21st century. Where we rightly never expect to find prehistoric trees 40 feet high only 200 km from one of the world's largest cities.

We have indeed been given an opportunity to turn back the clock. 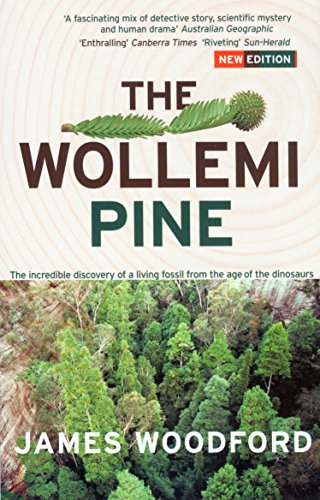 The Wollemi Pine: The Incredible Discovery of a Living Fossil From the Age of the Dinosaurs
One of the few books that we have that tell the amazing story of this 'living fossil' - the Wollemi Pine. An approachable reveal of a plant that is still mostly the realm of scientists and enthusiastic collectors.
Buy Now