In alcohol we trust

In the year 1799, in a young country called The United States of America biggest distillery produced 11 000 gallons of whiskey a year. It was owned by man, who is better known for a few other things he did in his life. His name was George Washington. The retired president was convinced to start alcobussines by his plantation manager James Anderson in the year 1797. The first distillation was so successful that George Washington decided to build a full-fledged distillery. His business had everything to become a world-famous brand to this time, but sadly George Washington died in the year 1799 and left it to his nephew Lawrence Lewis. Lawrence was a poor businessman, but it took him 15 years to destroy the company his uncle built in 2. In the year 1814 Washington's distillery was destroyed by fire, and it was not rebuilt back then. The first attempt was made in the early 1930s, but prohibition and crisis stopped those plans. The second attempt was started in the year 1997, from 2007 rebuilt distillery is selling whiskey made the same way George Washington and James Anderson made it.

One of the "greatest" soviet ideas to fight alcoholism was campaign that started in 1958. They had decided that they will put notorious alcoholics in the psychiatric hospitals and heal them there with help of addiction therapy specialists and revolutionary spirit, they only forgot to hire specialists so alcoholics just lived between people with other mental problems and that was not healthy for anyone. This brilliant program developed very fast, and later on, every alcoholic wanted to be part of it. It provided shelter, food and easy job with good salary for addicted people. They got place to sleep, food that they could not buy in regular shops (Such lavish products as, for example: cheese, butter and even eggs!), and lots of money they could spend on alcohol. It never healed anyone, but on the other hand nobody ever complained.

Alcohol could kill faster than we can imagine

The Aztecs found a simple and effective method to fight alcoholism. They were just killing almost everyone who was drinking before he got any chance to get addicted. If he was lucky, they just demolished his house and beat stupid ideas out of his head. Rules were very strict, the youngest Aztecs could not drink at all, a little bit older people could drink once. Not once a week, not once a year, but once. Only seniors (it is not sure how old they had to be) old could drink without any restrictions. After spending most of life on building step pyramids, endless wars, and baths in the blood of the enemies they deserved it more than anyone else.

It looks like alcohol was not Aztecs enemy from the start, probably it was not just caprice of one of their leaders, but effect of experience. There is an old Aztec story about city which was destroyed by alcoholism of citizens. Their goddess of alcohol was not very evil or demonic compared to other Aztec gods with lots of feathers and big teeth. Her name was Mayahuel, she was ordinary woman who discovered power of an agave plant and invented alcohol drink called pulque. As thanks gods invited her to their club, gave her extra 398 breasts and turtle she was riding on. Lady with 400 boobies was a perfect match for the god of fertility-Patecatl, who also was a god of healing and discoverer of the peyote. Result of alcomescaline marriage was 400 children-Centzon Tochtin, four hundred rabbits that liked to drink a lot. Rabbits were a personification of stages of drunkenness. If Aztecs had a 400-grade scale to describe that, for sure they needed to make some experiments in that matter before they finally decided that alcohol is bad for them.

Ancient China also had problem with alcoholism, so they decided to make some restrictions. Casual drink after work was forbidden, but drinking during rituals and events was ok. One of occasions to drink was a funeral. It created groups of people who attended any funeral they could find just to get drunk.

Most famous Chinese alcoholic was Jie, last emperor of Xia Dynasty who lived on the break of 18th and 17th century BC. For sure we know that he was traditional tyrant, who spent money on his pleasures, killed people for fun and did not cared about his country too much. For example, he was killing people who could not provide him wine and liked to mount his advisors and servants while drinking. Two books that give us more details ( Han Shi Waizhuan and Lienüzhuan ) come from 2nd and 1st century BC, so it is hard to say how much they base on reliable sources and how much on legends. But according to those books Jie found perfect girlfriend for himself, who was called Mo Xi. They both liked alcohol and killing people. One of her's ideas was building lake of wine, which was their favorite place to make sexual orgies. One time she ordered 3000 men to drink the lake dry. They only managed to drawn in wine, Mo Xi found it very funny.

A land drunk under

Sometimes alcohol led to something more positive than drunk fights, hangover and sexual partners from whom people want to run in the morning. For example, Australian healthcare started thanks to alcohol. In the times when part of the continent was a British penal colony, they just placed sick people in the shed and waited for their recovery or death. In the year 1809, Lachlan Macquarie- soldier, fraudster and of course alcoholic became governor of the colony. His priority was to build real hospital but he had no money. He talked to a few rich settlers, he promised them, that he will give them monopoly to sell rum, if they are going to build a hospital. Except for it, only members of the government were able to sell alcohol they already had in moment of arrangement. Of course, they agreed. Macquarie forgot to tell them that he had huuuge stash of alcohol, that allowed him to earn a little fortune, and that he will put high taxes on them, and settlers forgot to build lavatories in that hospital.

After alcohol people often end at hospitals, but alcohol stories start in other buildings. Most known places that served alcohol were saloons. We all know it from westerns, every little town on wild west had a saloon, where the main character could make an impression by walking through swinging doors, order glass of whiskey from bartender standing behind the long bar, shoot few bad guys, or at least start some fight. In real life, it looked a little bit different. Of course, archetypal saloons with swinging door existed but only in biggest towns, and not every saloon there had doors like that. Most of the saloons had no door at all. People moved too fast back then. Building of railway progressed, gold diggers moved out after every rumor about the new bonanza. People who wanted to find their vain of gold in selling alcohol needed to adjust to that lifestyle. Most of the saloons were placed in tents, bar was plank placed on two barrels, there were no pianists or even tables, clients were sitting on simple benches.

According to Egyptian mythology, at some point, god Ra had enough of people and ordered goddess Hathor to kill them all. After some time he decided to spare human vermins, but Hathor liked human blood too much. Ra needed to trick her to make her stop. He gave her seven thousand barrels of beer, she thought it was human blood, got drunk and went to sleep. Saving humanity is a good reason to celebrate, so Egyptians did. Once or twice a year they organized a festival for Hathor. After short and boring official part, everyone was getting drunk, and took part in big orgy.

Death of king Casimir III the Great in the year 1370 ended rule of Piasts dynasty in Poland. Of course, it was not good news for surviving members of house Piast. One of them was Władysław the White. He was son of Casimir's cousins, who got the same name and number as his relative on throne, but he didn't earned himself any cool nickname. First try to become king did not ended as Władysław planned and he needed to run away from Poland. He came back stronger and smarter, but to show that he is serious player in this game of thrones, he needed to take over castle in Złotoria. Instead of army, he sent few guys dressed like fishermen with lots of wine and ordered them to drink with soldiers inside. Plan worked, castle was taken over without any casualties, and commander of Złotoria was still sleeping when Władysław came to see him. Sadly for Władysław army of king Luis I did not wanted to drink with him, and they took over his new castle traditional way, he needed to run away again and died in France.

If you liked it (article, not alcohol), you may like the book "A Short History of Drunkenness" by Mark Forsyth which was the main source for my article. 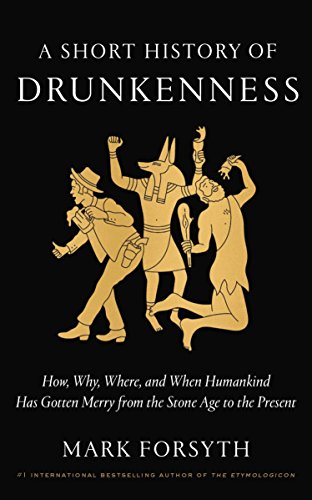 A Short History of Drunkenness: How, Why, Where, and When Humankind Has Gotten Merry from the Stone Age to the Present
Buy Now