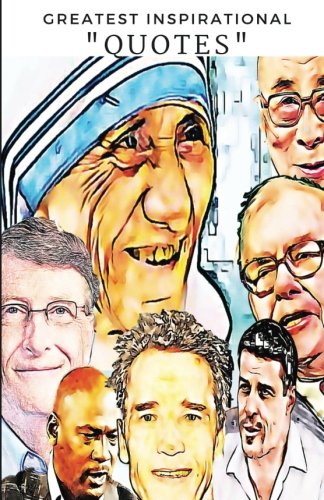 Quotes: 101+ Greatest Quotes on Happiness, Success and Motivation from famous people around the world: Greatest and most powerful quotes ever used by ... from the famous people ever lived) (Volume 1)
Buy Now

101 inspirational, motivational, butt-kicking quotes to make you think and give you a good boost.

I am a quotes maniac. I love reading success quotes and inspirational quotes of all kinds, from all different types of authors. I have many of these quotes memorized, and whenever I run into a challenging situation, whether on the job or at home, I do my best to pull from the "reservoir" of quotes that I've logged into my memory bank, to help me keep my cool. Many times these quotes have provided the needed impetus to keep me going during the rough patches of my life, and other times they weren't necessarily something that pulled me out of a situation, but rather became catalysts to get me going in a new & exciting direction. I hope you enjoy these quotes as much as I have over the years.

1. “I made a resolve then that I was going to amount to something if I could. And no hours nor amount of labor nor amount of money would deter me from giving the best that there was in me.” – Col. Harland Sanders

3. "What lies behind us and what lies before us are tiny matters compared with what lies within us." - Oliver Wendell Holmes

4. "If we all did the things we are capable of doing, we would literally astound ourselves." - Thomas Edison

5. "He, who every morning plans the transactions of the day, and follows that plan, carries a thread that will guide him through a labyrinth of the most busy life." - Victor Hugo

6. "There are no shortcuts to any place worth going." - Beverly Sills

7. "Unless you are willing to drench yourself in your work beyond the capacity of the average man, you are just not cut out for positions at the top." - J.C. Penney

8. "You have to find something that you love enough to be able to take risks, jump over the hurdles and break through the brick walls that are always going to be placed in front of you. If you don’t have that kind of feeling for what it is you’re doing, you’ll stop at the first giant hurdle." - George Lucas

9. "Something in human nature causes us to start slacking off at our moment of greatest accomplishment. As you become successful, you will need a great deal of self-discipline not to lose your sense of balance, humility and commitment." - H. Ross Perot

10. "The day after the victory is more dangerous than the day before the battle." - Michael T. Smith

12. "The greatest things ever done on Earth have been done little by little." - William Jennings Bryan

13. "Sometimes when you innovate, you make mistakes. It is best to admit them quickly and get on with improving your other innovations." - Steve Jobs

14. "Leadership is based on inspiration, not domination; on cooperation, not intimidation." - William Arthur Wood

15. "Long-range goals keep you from being frustrated by short-term failures." - James Cash Penney

16. "Enthusiasm is the greatest asset in the world. It beats money and power and influence. It is no more or less than faith in action." - Henry Chester

17. "Nothing great has ever been achieved except by those who dared believe that something inside them was superior to circumstances." - Bruce Barton

18. "There’s only one way to succeed in anything, and that is to give everything." - Vince Lombardi

19. "The tragedy of life is not so much what men suffer, but rather what they miss." - Thomas Carlyle

20. "I don’t know the key to success, but the key to failure is trying to please everybody." - Bill Cosby

22. "Perhaps the most valuable result of all education is the ability to make yourself do the thing you have to do, when it ought to be done, whether you like it or not; it is the first lesson that ought to be learned; and however early a man’s training begins, it is probably the last lesson that he learns thoroughly." - Thomas Huxley

23. "The only place success comes before work is in the dictionary." - Vince Lombardi

24. "There’s a very positive relationship between people’s ability to accomplish any task and the time they’re willing to spend on it." - Dr. Joyce Brothers

26. "Opportunity is missed by most people because it comes dressed in overalls and looks like work." - Thomas Edison

28. "Everyone who got where he is had to begin where he was." - Robert Louis Stevenson

29. "The secret of concentration is the secret of self-discovery. You reach inside yourself to discover your personal resources, and what it takes to match them to the challenge." - Arnold Palmer

30. "Most successful men have not achieved their distinction by having some new talent or opportunity presented to them. They have developed the opportunity that was at hand." - Bruce Barton

31. "If your actions inspire others to dream more, learn more, do more and become more, you are a leader." - John Quincy Adams

32. "Being busy does not always mean real work. The object of all work is production or accomplishment, and to either of these ends there must be forethought, system, planning, intelligence and honest purpose, as well as perspiration. Seeming to do is not doing." - Thomas Edison

33. "People of mediocre ability sometimes achieve outstanding success because they don’t know when to quit. Most men succeed because they are determined to." - George Allen

34. “A winner is someone who recognizes his God-given talents, works his tail off to develop them into skills, and uses those skills to accomplish his goals.” - Larry Bird

35. "No great performance ever came from holding back." - Don Greene

36. “Are you bored with life? Then throw yourself into some work you believe in with all your heart. Live for it, die for it, and you will find happiness that you had thought could never be yours.” - Dale Carnegie

38. “It had long since come to my attention that people of accomplishment rarely sat back and let things happen to them. They went out and happened to things.” - Elinor Smith

39. “There are two kinds of failures: Those who thought and never did, and those who did and never thought.” - Laurence Peter

40. “It is no use saying, “We are doing our best.” You have got to succeed in doing what is necessary.” - Winston Churchill

41. “I attribute my success to this – I never gave or took any excuse.” - Florence Nightingale

42. “Businesses that grow by development and improvement do not die. But when a business ceases to be creative, when it believes it has reached perfection and needs to do nothing but produce – no improvement, no development – it is done.” - Henry Ford

43. "You cannot prevent the birds of sorrow from flying over your head, but you can prevent them from building nests in your hair." - Chinese Proverb

44. “We must keep innovating in order to stay relevant.” - Joel Comiskey

45. "Life is like music; it must be composed by ear, feeling, and instinct, not by rule." - Samuel Butler

46. “The conventional view serves to protect us from the painful job of thinking.” - John Kenneth Galbraith

47. "Criticism is something you can avoid--by saying nothing, doing nothing and being nothing." - Aristotle

48. “We should believe what is true even if it hurts, rather than what is false, even if it makes us happy.” - Edward Lorenz

49. "Don't worry about people stealing your ideas. If your ideas are any good, you'll have to ram them down people's throats." - Howard Aiken

50. "The reason why worry kills more people than hard work is that more people worry than work." - Robert Frost

54. "Eighty percent of success is showing up." - Woody Allen

56. "If you can't be a good example, then you'll just have to be a horrible warning." - Catherine Aird

57. "Conventional people are roused to fury by departure from convention, largely because they regard such departure as a criticism of themselves." - Bertrand Russell

58. “Man will occasionally stumble over the truth, but most times he will pick himself up and carry on." - Winston Churchill

59. "Failure is unimportant. It takes courage to make a fool of yourself." - Charlie Chaplin

60. "When you want to test the depths of a stream, don't use both feet." - Chinese Proverb

62. "To be interested in the changing seasons is a happier state of mind than to be hopelessly in love with spring." - George Santayana

63. "Nothing is particularly hard if you divide it into small jobs." - Henry Ford

64. "Whenever you are asked if you can do a job, tell 'em, 'Certainly, I can!' Then get busy and find out how to do it." - Theodore Roosevelt

65. "However beautiful the strategy, you should occasionally look at the results." - Winston Churchill

67. "Do not fear to be eccentric in opinion, for every opinion now accepted was once eccentric." - Bertrand Russell

68. "You may have to fight a battle more than once to win it." - Margaret Thatcher

69. "It is better to have a permanent income than to be fascinating." - Oscar Wilde

71. "Each problem that I solved became a rule which served afterwards to solve other problems." - Rene Descartes

73. "You have to learn how to separate the pressure from the problem." - Michael T. Smith

74. "Even if you're on the right track, you'll get run over if you just sit there." - Will Rogers

75. "If you are patient in a moment of anger, you will escape a hundred days of sorrow." - Chinese Proverb

76. "The difference between the impossible and the possible lies in a person’s determination." - Tommy Lasorda

77. "Success without honor is an unseasoned dish; it will satisfy your hunger, but it won’t taste good." - Joe Paterno

78. "Always make a total effort, even when the odds are against you." - Arnold Palmer

79. "All things are difficult before they are easy." - Thomas Fuller

80. "The road to success is always under construction." - Lily Tomlin

81. "There is no passion to be found playing small – in settling for a life that idles rather than the one you are capable of living." - Nelson Mandela

82. "We first make our habits, and then our habits make us." - John Dryden

83. "The will to conquer is the first condition of victory." - Ferdinand Foch

84. "Every leader needs to clearly explain the top three things the organization is working on. If you can’t, you are not leading well." - Jeffrey Immelt

86. "Progress is what happens when impossibility yields to necessity." - Arnold Glasgow

87. "At first our dreams seem impossible, then they seem improbable, but when we summon the will, they become inevitable." - Christopher Reeve

90. "I am a great believer in luck, and I find the harder I work the more I have of it." - Thomas Jefferson

92. "I know the price of success; dedication, hard work and an unremitting devotion to the things you want to see happen." - Frank Lloyd Wright

93. "One worthwhile task carried to a successful conclusion is worth half-a-hundred half-finished tasks." - Malcolm S. Forbes

94. "I’ve always believed that if you put in the work, the results will come. I don’t do things half-heartedly. Because I know if I do, then I can expect half-hearted results." - Michael Jordan

96. "An idea that is developed and put into action is more important than an idea that exists only as an idea." - Siddhartha Gautama

97. "No task is a long one but the task on which one dare not start: It becomes a nightmare." - Charles Baudelaire

98. "Nothing will ever be attempted if all possible objections must first be overcome." - Samuel Johnson

99. "As is our confidence, so is our capacity." - William Hazlitt